Movie Review: Hawke and Almereyda take “Tesla” out for a spin 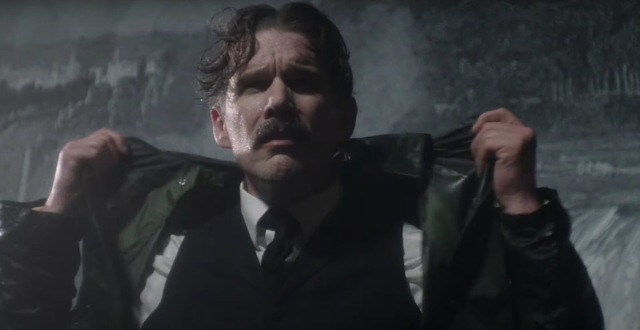 How do you feel about Ethan Hawke, playing the mistreated inventor Nikola Tesla in a hoarse, unaccented whisper, stepping up to the mike and covering the Tears for Fears hit, “Everybody Wants to Rule the World?”

We’ve already seen the artifice of writer-director Michael Almereyda in many a scene in his take on “Tesla.” Thomas Edison (Kyle MacLachlan) whips out an iPhone after one “never-happened” meeting with his former protege and rival.

That seems right. Surely Tesla would have been an Android guy.

Obvious moments of rear projection take Tesla to a World’s Fair, onto the plains of Colorado, into long-closed (black and white images) restaurants, street scenes and the like.

At one point, a keen-eared listener can hear modern ambulance sirens wailing in the distant background on the soundtrack. FIRE the soundmixer! Or, um, leave it in. Why not?

As our narrator, Anne Morgan (Eve Hewson of the recent “Robin Hood” debacle), daughter of robber baron J.P. and a Tesla flirtation, has already looked at the camera, shown us her laptop and demanded that we “Google” Tesla and Edison. We’re well–immersed in this whole “fourth-wall” breaking, modernish lark of a bio pic.

One ugly fact harshing that vibe is the cruel realization, some minutes into Hawke’s re-teaming with his modern-set “Hamlet” director, that Hawke might be the third best big screen Tesla to come along. In “The Prestige,” the charismatic David Bowie did for the inventor of AC current and most of what made radio possible what he did for Andy Warhol in “Basquiat” — made him other-worldly and cool. And Nicholas Hoult’s supporting turn in “The Current War: Director’s Cut” was sharply defined as well.

Hawke? He mumble-whispers his way through the notoriously introverted Tesla, not taking even a stab at an Eastern European accent. That he sings in this same voice is kind of rubbing our noses in it.

Couple that with a generally inferior supporting cast, when compared with the all-star Oscar bait of “A Current War,” and you’ve got the lesser of two Tesla tales.

But Almereyda tells a story that carries on after “A Current War,” and begins before it. It is Tesla-focused, and you don’t have to be a Tesla cultist to get at least a little charge (ahem) out of what he’s done with the man.

He’s not shy about adding some fanciful “what might have beens,” and not just the singing, cell phones and laptops. What if Edison had apologized for his slights, public relation bites and legal fights after those AC/DC wars, and they’d teamed up?

What if they’d settled their earlier dispute over compensation in Edison’s lab with an ice cream cone fight?

What if Tesla hadn’t let George Westinghouse (Jim Gaffigan, nobody’s idea of The Next Michael Shannon of “Current”) plead/con him into giving up his royalties on “polyphase” generators and alternating current patents?

“A sensible man,” Miss Morgan intones, “would have said, ‘Wait a minute. Let me talk to a lawyer.”

The Irish Hewson manages a perfect, deadpan Gilded Age American accent as narrator/flirt Morgan. Similarly, Rebecca Dayan as famed actress Sarah Bernhardt, a fan and friend of both Edison and Tesla (who was smitten), gives us just enough French to make a convincingly Divine Sarah.

Not enough is done with Tesla’s European friend, assistant and fellow inventor Szigeti (Ebon Moss-Bachrach), still a welcome Hungarian addition to the “true” part of the story.

The framework of something original and engaging is here, if only Almereyda had seen it, and maybe had a little talk with Hawke about splitting the difference between “Method” and “comprehension” in his line-readings. 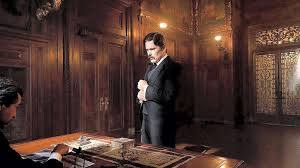 Those of us fascinated by Tesla’s tragedy are going to see this, no matter what. But “Tesla” is a film that peaks — as the inventor himself did — when his alternating current lights up the Chicago Columbian Exposition of 1893 (World’s Fair).

A shy man in caught up in the swirl of invention, glory, showmanship and hype, this is the most interesting part of the story and should dominate the movie — accolades here, a glimpse of Annie Oakley there.

Instead, we open at about the time Edison’s first wife died, in August of 1884, for a scene the darkened lab where the grand, deaf inventor Edison holds forth to his acolytes, jokingly asking Tesla “Are you really from Transylvania? Have you ever eaten human flesh?”

Tesla marvels how Edison “talks to everyone” at the lab, from engineers to custodians, “but is incapable of listening.”

Self-conscious touches abound as we hit the high points, and lightly touch on the lows, of Tesla’s subsequent career. Do the flourishes add to our understanding of the man? Only Anna Morgan’s “Google search” suggestions.

Other than that, they seem either budgetary (all that rear projection instead of location shooting) or contrivances to make the picture “different” from “A Current War.”

In its best moments, “Tesla” holds its own with the earlier film. In too many others, third-choice casting in supporting roles and Hawke’s “closed-captioning” swallowing of his lines in the lead make “Tesla” an also-ran. Again.

MPAA Rating: PG-13 for some thematic material and nude images

Credits: Written and directed by Michael Almereyda. An IFC release.