Netflixable? In Lagos, all the swells stay at “The Royal Hibiscus Hotel”

“The Royal Hibiscus Hotel” is a shiny, foodie-friendly bauble of a rom-com, practically a brochure for Nollywood, the nickname the rest of the world has given Nigeria’s film industry.

The acting’s uneven, the story limp and generic. And like a brochure, it just lies there — static, a comedy lacking the animation, action and sense of life that would make it come alive.

It’s about an upper class Nigerian, Ope (Zainad Balogun), plugging away in the London food scene, mentored by a famous Frenchman (Elijah Braik) but fed up with the the bloke she works for, the latest London braying bully who thinks he’s Gordon Ramsey.

Maybe it’s time to take one of those calls from her always-dialing parents, a fractious couple (Jide Kosoko, Rachel Oniga) whose inability to get to the bloody point drive her (and us) to distraction. Maybe it’s time to go home to the family’s Lagos hotel, the Royal Hibiscus.

Quite the Plan B she has in mind. Must be nice. But it’s not like the place couldn’t use her help. The gum-snapping desk clerk (Kemi Lala Akindoju) would rather come on to the rich guests than answer the phone or check guests in. And the chef (Charles Inojie)? He’s fond of the bottle — any bottle.

It’s just that Dad hasn’t told her he’s selling the place. With her Mom nagging her father that “A lady her age should be married,” he’s just happy to have her back home. He lets her take over the kitchen and start making plans even as the two hunky investors (Kenneth Okolie, Deyemi Okanlawon) show up to close the deal, or badger him until he does.

But then Deji (Okolie) decides he likes what he sees — not just in the hotel, but in the kitchen. And things get…complicated. 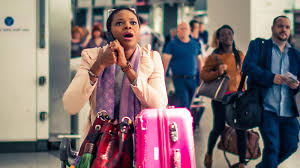 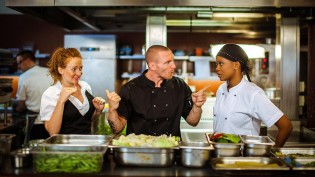 Only they don’t. Not really. Absolutely nothing happens that we don’t see rolling gently down the hill an hour before it hits us.

The food makes for appetizing set dressing, but there’s too little preparation and explaining to make it a central feature of the film. The kitchen is as quiet as a morgue, and about as lively.

Scenes don’t move. Actors just take their position, stand there and prattle their not-that-funny lines (in English and Yoruba, with English subtitles).

The leads are lovely and charming and have chemistry. But they’re surrounded by mostly much broader players, bugging out their eyes, working their mouths as if they’ve just made the jump from silent film to sound.

Ms. Oniga may be a beloved figure in Nigerian cinema (I don’t know that.), but in this hemisphere, she should could give seminars in Central Park — the art of mugging for the camera.

This plays out as a film with a lovely sheen of sophistication, a Nigeria of affluence, culture-consciousness, with no crowds, traffic jams or poverty. But the kitchen, hotel and country we see here don’t feel cooked in, lived in or loved in.