Netflixable? A serial killer reminds us of “The Plagues of Breslau” 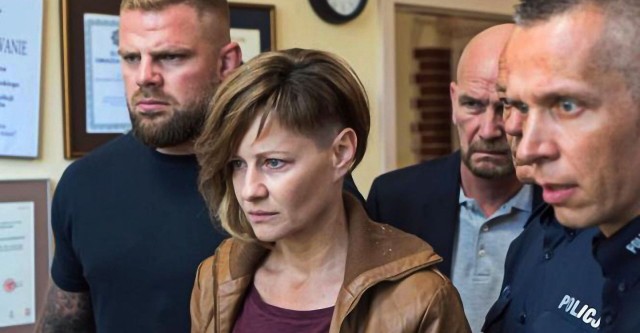 Hollywood has so pounded the “serial killer thriller” to death that you kind of wish they’d close the door on the subject.

But here’s a Polish version that’s as sharp as a cold slap in the face, as grisly as anything Hannibal Lecter dreamed up, and then some.

“The Plagues of Breslau” is social satire and history, police procedural and a grim, judgemental police indictment. It teaches and teases and is so tight that it’s rolling the credits before you have the chance to process everything that’s been thrown at you.

A short history lesson — “Breslau” is the old Germanic name for Wroclaw, a celebrated, historic and by reputation well-educated city in Silesia, on the Western edge of Poland. That’s where our story is set.

Our detective, Helena Rus (Malgorzata Kozuchowska), is sitting in her car, weeping, when we meet her, and not over that haircut. She’s recently suffered a loss.

Hurling her into a murder case doesn’t lessen her vulnerability. But pesky freelance TV reporters (Maria Dejmek) and annoying crime-scene bystanders get on her nerves and bring out the threats.

“In ten seconds, everyone here gets fingerprinted and processed as a possible suspect,” she growls, in Polish with English subtitles. “In our lovely country, that takes four hours. Ten, nine, eight.”

She’s just as touchy with her brutish, selfie-obsessed lout of a partner, whose radio call name is “Bronson” (Tomasz Oswiecinski).

The first body is found stitched into a rare cowhide and stuffed in a stall as a street market. A tip — if bloodied corpses and explicit autopsies make you squeamish, move along.

The word “degenerate” has been branded on the victim’s abdomen.

The next victim, creatively delivered in pieces the very next day, has “plunderer” branded on his skin.

As the words are written in Polish, “that rules out foreigners,” the lady coroner quips. “A very methodical whack job,” is her cursory verdict.

The case is about to become a sensation, so a third expert is brought in, a profiler from the central office. All the experts in this corner of Poland are women, a sly bit of social commentary slipped into the slaughter.

A bluff and burly woman, she (Daria Widawska) sizes up crime scenes in a flash, immediately recites the Polish history that this killer seems to be repeating (a 1741 “cleansing” of the city’s wrongdoers by Frederick the Great) and even second-guesses the doctors who pronounce Bronson “brain dead” after getting caught up in an epic stunt pulled off by the killer.

One “victim” per day, each with some mortal personal or social sin attached to their resume, burned onto their flesh. Can the cops reason out a way to get ahead of the killer and stop the spree? 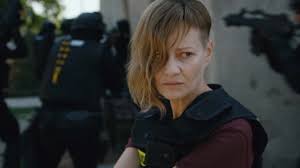 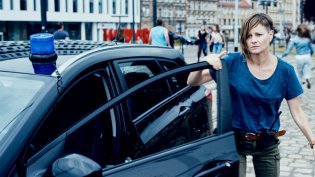 Satire enters the picture through casting, visuals and the nature of the crimes. The police, aside from Det. Rus and our profiler, are doltish and slow off the mark.

“They’ll fire us all for this, right?” an assistant to the chief mutters, to the general agreement of all who surround him, including his boss.

Crime scenes are sloppy, autopsies are carried out under strips of fly paper in a morgue you can practically smell.

One of the victims was the monstrous boss of a slaughterhouse, where he refused to run the AC “because it cost money,”  and locked the bathrooms, forcing employees to wear diapers on their cruel 12 hour shifts.

The sense of corruption, of criminals unpunished, a culture that’s never shed the Soviet domination that so scarred it for much of the last century (one crime takes place during a performance of the Russian opera, “The Fiery Angel”).

Flies surround the cynical, hair-flipping TV reporter, who berates her cameraman for being “no man” for flinching every time someone in authority threatens him.

And this avenger has come among them to “cleanse” the city anew.

One set-piece, involving explosions and racehorses loosed in the city, is flat-out dazzling. Let’s hope the “Hollywood remake” does it as well.

The performances are more engrossing than affecting, with Kozuchowska never letting Helena show a scintilla of empathy. And some of the plot twists may give you whiplash.

But “The Plagues of Breslau” throws a lot of fresh ideas at the genre and blood on the screen, making for one of the most surprising pictures to wear the label “serial killer thriller” in years.