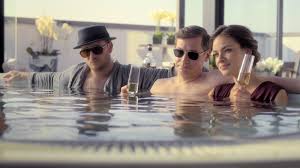 The rise and fall of a hustler, crook and con-artist always makes for a compelling yarn, and making the tale German doesn’t change that.

If anything, a nasty “bait and switch and repeat” real estate shuffle/money laundering drama takes on relevance, considering what turns up when you Google“Deutsche Bank and Trump”on any given day.

“Rising High” is a story of struggle and decadence, working the angles and breaking and entering, dodging taxes and snorting coke. It’s “Blow” and “Wolf of Wall Street” lite — 95 minutes of a German hustler telling tale of ill-gotten gain to a German journalist.

Viktor (David Kross) was always told “Smile, and you’ll conquer the world” by his old man. But his father never amounted to much, his mother left and Viktor had to start his adult life scrambling.

He moves out, tries to get an apartment, and runs into the “We need to see your open-ended employment contract.”

He needs to prove he’s employed, that he can afford it. And that demand is even more alarming in German (with English subtitles, or dubbed into English by Netflix). He takes a crappy job that only Bulgarian itinerant laborers would want — construction. That’s the modern day share-cropping trap of the desperate.

“He was my boyhood hero!”

Viktor’s first hustle gets him a penthouse, which he subleases to unruly Bulgarian laborers who are there just long enough to trash it and get arrested. But that’s how he meets Gerry (Frederick Lau). He’s even sketchier than Viktor, and teaming up, the German real estate, insurance and banking businesses never see what hits them.

The tax man? That’s for the third act, of course.

Gerry’s never had a fresh shave, never without his hat, never long between brothel visits and never shy about bringing whoever they’re dealing with — an insurance firm they leverage into their portfolio — down to his level.

“I’d like to sing a song, now, if that’s OK,” he tells a flabbergasted boardroom, beginning a Christmas carol. “Anyone NOT joining in, is fired!”

An accountant offers to help cook their books — “We only employ people who take drugs. Do you?”

Kross (“War Horse”) and Lau (of the famous “Nazi classroom experiment” drama “The Wave”) capture the in-the-moment morality — or amorality — of this breed of predator. It’s too flattering to call them sharks. They’re not brave, smart, deep or even particularly cunning. They’re all bluff and misdirection, hurtling from hedonism and bravado to panic several times a day.

We see versions of them on every infomercial or Trump press conference.

“Rising High” (“Betonrausch” in German) follows its too-familiar story arc to a somewhat expected conclusion. The financial dodges range from amusing (winning real-estate auctions by bribing the doorman to send their competitors to an empty room) to confusing.

The pitfalls — drugs, marriage (Janina Use) to an amoral hustler to happens to be a banker) — are tried and true, if not downright trite.

But it starts well, finishes with a flourish and finds enough “Isn’t this rip-off cute?” moments to be worth your while.

Credits: Written and directed by Cüneyt Kaya. A Netflix Original.