“Handia” or “The Giant” is a visually stunning Basque fable about sibling rivalry, show business and the curse of gigantism set in mid-19th century Spain.

It’s about two brothers from a tiny village — Altzo– sons of a tenant farmer. Martin (Martin Eleizegi) is the eldest. And while he’s close to brother Joaquin (Eneko Sagardoy), he’s understandably put-out when soldiers from the Carlist army come to conscript one son from every family for the 1838 civil war, and their father (Ramón Agirre), without a moment’s thought, serves him up as cannon fodder.

He survives the grim savagery of the conflict, losing the use of an arm. And that doesn’t salve the grudge he still carries. Three years pass before he returns home, the Carlists having lost this war of Spanish royal succession to the Isabelinos.

When he returns, the winsome Maria (Aia Kruse) is still there and still single. But brother Miguel Joaquin? He towers over the town. He’s two-and-a-half meters tall (over eight feet). And he’s still growing. The priest keeps measuring him.

Miguel Joaquin may be Daddy’s favorite, but he’s eating them out of house and home. They barely make the rent. One-armed Martin won’t make that any better.

But an “impresario” (Iñigo Aranburu, colorless in what should have been a colorful role) comes to check out the legendary giant, and makes a pitch to their father. Martin has to convince his sibling that it doesn’t matter if they laugh at Joaquin, that “people will pay to see something they’ve never seen.”

Mr. Colossus, as he’s billed, can eight eight cutlets at a time and down “20 liters of cider a day.” He has to be the tallest man in the world. Yes, he speaks Basque, but the show doesn’t have him talk — just appear from behind a shadow curtain — all eight feet of him.

They appear before the queen in Madrid, and tour Paris and even see Stonehenge, many of the great sights of Europe. But the younger brother’s resentment simmers, the older brother’s desperation to get together cash to go to America, a marriage and mishaps and quarrels complicate the relationship.

A few good scenes lift a fairly desultory story — Queen Isabella’s impertinent demand to know if he’s “completely in proportion” (the film is in Basque, Spanish, French and English) — physicians hiring the act to study him, humiliating Joaquin with their laughter and questions.

Even that scene lacks much surprise or spark, as we saw it done better in “The Elephant Man.” And while the effect of transforming an actor into a giant is convincing, there’s not enough pathos in the performance to make him sympathetic.

Martin similarly is just there, but barely present. The film finds some heart for the finale, but the period detail, stunning scenic cinematography and generic incidents aren’t enough to pull the viewer into this Basque fable. 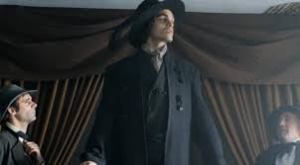 The conclusion lacks much in the way of a fable’s moral twist, but we do feel the brothers connect there.

The sense of myth that “The Giant” should have throughout arrives, at long last. Although there are flashes of the exploitation he should be bristling at from the start, bits of well-staged action, the sense of theater of “the act” and the wonders of the time (photography was very new), the spectacle of “The Giant” doesn’t add up to much for the viewer to care about.