Netflixable? A hockey player wears the horrors of his traumatic childhood in “Indian Horse”

“Indian Horse” is a hockey story serving as an expose of Canada’s infamous Catholic “Residential School” system and the horrors it inflicted on generations of indigenous people there.

Based on a popular novel by acclaimed Ojibway fiction writer Richard Wagamese, it covers familiar ground in the long litany of stories about abusive Catholic priests that burst into the light with “The Boys of St. Vincent,” and the monstrous crimes of such schools (“Older Than America,” “We Were Children”).

So don’t look at the picture of the hockey player on the Netflix menu and figure this is just a feel-good “against all odds” story on skates. It’s conventional in that regard, but its subtext leads to powerful moments that sometimes let it transcend its genre.

We see the cruel and near-genocidal “system” through the eyes of one Ojibway child’s experience, recalled through flashbacks decades later at a support group for those who survived the experience, and were traumatized by it. Opening titles note that this idea — removing Native children from their families for trade schools aimed at assimilating (and indoctrinating in Catholic teachings) Indigenous people into white, mainstream Canadian culture began in 1876, and didn’t truly end until — get this, 1996.

Thousands died, physical and sexual abuse was rampant. As the adult Saul Indian Horse narrates, “They called it a school, but it was never that. The only test was whether you could endure it.”

It’s no wonder his family goes to extremes to spare him and his brother the experience. In 1959 they are spirited away by their parents and their grandmother (Edna Manitowabi) from Manitouwadge to “our ancestral lands to the North.”

It’s a perilous journey by canoe, and Saul’s brother sickens and dies on the trip. His parents leave him with his grandmother, but the long arm of the Canadian government finds him and throws him into an environment where whippings are administered for not speaking English, for clinging to a younger sibling scared to death at being away from her family, for just about anything.

“The Lord God is your Father now,” the abusive nuns (Emily Klassen plays a particularly vile one) and priest headmaster (Michael Murphy).

But the new priest (Michiel Huisman of “Game of Thrones” and “The Other Lamb”) in charge of the school hockey team gives little Saul something to look forward to. He is too young to play, but teaching him to skate on the sly shows Saul (Sladen Peltier) to be a natural. Before long he’s rejecting escape attempts by his equally oppressed classmates just for the chance to show his stuff.

The story takes us through those formative years, jumps ahead to the late ’60s when Saul stars for an Indigenous semi-pro team, and endures the awful racism white Canadians hurled at Natives in virtually every public setting.

And then a coach (Martin Donovan) for a minor league team connected with the Toronto Maple Leaf sees Saul (Ajuawak Kapashesit) and convinces him that his innate feel for “THEIR game” — meaning white Canada’s national sport and obsession — lets him “conjure” magic on the ice, and the kid is put on track to the NHL. 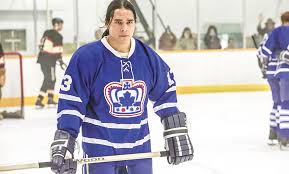 Clint Eastwood’s longtime camera operator Stephen S. Campanelli directed “Indian Horse,” and does a solid job of recreating hockey in the pre-helmet era. Good editing can make half-speed games look realistic, and that’s important as the film is hockey-centric for its middle acts.

But Wagamese’s story doesn’t let us off the hook with just hockey. His novel came out before Canada’s long-overdue “Truth and Reconciliation Commission” reckoning with what generations were put through. The story’s ugly underbelly keeps it downbeat, even when we expect it to turn uplifting.

And the unfortunate fact that the big revelations here are depressingly over-familiar works against the movie, allowing us the time to notice the flat and amateurish nature of some performances and the polished, over-familiar archetypes even the screen veterans are playing.

In Canada, “Indian Horse” was labeled “much more than a movie,” which is almost certainly true thanks to its message and what it depicts. But the film lacks shock and catharsis, just a depressing recreation of awful things.

As cinema, it’s somewhat less than it could have been, lacking the emotional highs and lows that compelling characters compellingly played could have given it. Saul is stoic, first scene to last. And the villains never rise to the level of unforgettable the way “The Boys of St. Vincent” made Martin Czerny a movie star.

Credits: Directed by Stephen S. Campanelli, script by Dennis Foon, based on the novel by Richard Wagamese.