Posted on April 2, 2020 by rogerinorlando 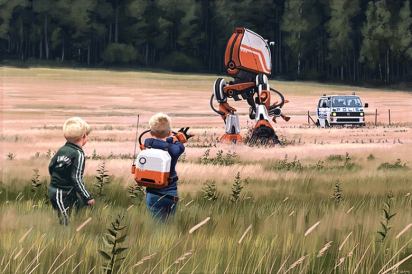 How far will you go into a series, limited or otherwise, before committing to it, heart, soul and investment in time?

Because pandemic or not, storytelling in the “Binge TV” era has a couple of common traits that a savvy viewer makes before punching in Hulu, Amazon, Netflix, Topic, etc.

The pace of storytelling is geologically slow. Series creators have become quite profligate with the viewers’ time. And hand-in-glove with that glacial pacing is a “less is more” sort of storytelling that resists the urge to put a lot of action or incidents into each episode, or to get to the point with any sense of urgency.

“Tales from the Loop,” a new series from the fellow behind “Legion,” was  inspired by paintings by Swedish artist Simon Stålenhag, dated looking slice-of-life images that showed kids playing in the ruins of an alt-history ’80s sci-fi dystopia — derelict robots, abandoned spacecraft or hi-tech labs.

It plays like a TV series inspired by paintings. Striking to look at — pretty. Static. Austere. Slow.

Creator Nathaniel Halpern (“Outcast” and “Resurrection” are his other pertinent credits) is reaching for that mystery that the audience will latch onto more than characters we connect with and who bring us back.

“Loop,” basically eight stand-alone sci-fi “tales” set in an Ohio town, circa 1979, is about a place where life is impacted by an underground “loop” — think CERN, particle colliders or some such.

The director of MOEP — the Mercer Ohio Experimental Physics lab — is Russ (Jonathan Pryce), who pitches their work and its impact on this place as creating things we know to be impossible, “and yet, there they are.” He repeats that claim to his grandson (Duncan Joiner). We don’t have to hear discussions of time travel, multiverses and the like to feel or speculate that this is what he’s talking about. Science fiction?

“I prove its possible.”

Thus, episodes tamper with mortality, revisiting your younger self via some magical fluke of “The Eclipse,” a huge ball-gadget buried within the confines of the vast underground complex.

We sense little urgency in any of these stories, nothing particularly sinister either. Only the atl-tech ’80s weirdness of “The Loop” connects it to “Stranger Things,” “Black Mirror” or the granddaddy of weird-for-weird’s-sake TV, “Twin Peaks.”

Yes, there might be a mystery to be solved, and it’s to do with this place and the work that that makes a little girl’s mother (and her house) disappear. Or was it ever there at all?

What does Russ’s daughter (Rebecca Hall) know about what’s going on, what’s to come and how is she able to figure out what’s up with the girl and the missing mom in a flash?

And did they really cast the great Jane Alexander, fly her to Winnipeg and give her nothing more than breakfast, babysitting and gardening scenes (with almost no dialogue)?

All of which circles me back around to that fundamental question, is it worth the eight hours it’ll take to binge this beast into submission?

Taking into account different strokes for different folks, I know that SOME people got more out of “Little Fires,” SOME are still chewing on “Ozark” (1.5 seasons for me, enough), and some head-cases are still investing in “Walking Dead,” etc.

I love the genre, and if I was looking for a theatrical film analog to “Tales from the Loop,” it would be “Another Earth,” a chill, austere and faintly creepy feature starring indie darling Brit Marling.

Did you see it? Think that would be worth eight hours of your viewing life? There you go.

1 Response to Bingeworthy? Amazon’s serene, slow “Tales From the Loop”