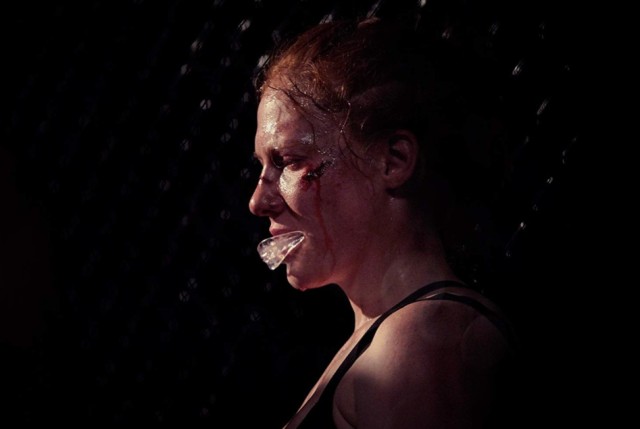 “Rag Doll” is a boxing-my-way-out-of-a-jam drama that flirts with being interesting, in between passages of middling melodrama and wilder, illogical “Nobody’ll see THAT coming” surprises.

It’s a fight picture of slo-motion bouts (for the most part, hides the skill levels of the fighters), obstacles that build, misery upon misery, and a whole lot of stuff that happens off camera when less interesting stuff is what we’re often treated to on camera.

The twist here is that the mixed martial arts fighter is a woman, a pale redhead named Nora Phoenix (Shannon Murray of “The Maestro”). And the stuff she’s dealing with, man…

She’s got a sick mother (Stephanie Erb) who makes jokes about dying.

“Who wants to sit around and watch me fall apart?”

She’s broke, even though she works as a hotel maid and turns tricks on the side. The other maids hate her “lazy” guts.

And she trains. “Ok, let’s see some Jiu JITSU!” her trainer (Dot-Marie Jones) bellows. Nora’s appearance has earned her the nickname “Rag Doll” at the gym. But she’s a ready-to-suffer sparring partner/punching bag for contender Aisha (Roxana Sanchez).

Oh, and she’s attracted to Aisha. Anything I’m leaving out?

“Rag Doll” follows Nora on a downward spiral, disinterested at work — and exhausted — appeasing her mouthy mom’s caregiver and dealing with the unwanted attentions of an Uber “guy who is well-balanced on his meds” (Dante Basco), a nice man who paid her mom’s co-pay at the pharmacy once.

Sanchez is a far more convincing fighter than Murray, Erb is one of those too-healthy-looking dying actresses.

Basco? He gives the fussiest, most mannered and irritating nothing of a performance I’ve seen in a while.

Seriously, if the script does you no favors, adding vocal tics and stammers and fidgets — he IS supposed to be medicated — isn’t going to help.

“Rag Doll” is at its most involving when it’s depicting the simple struggle of keeping all these wolves at bay — depression, doubt, poverty, etc. The fights, including “the big tournament,” are cliches right down to the ringside “coverage” of a small time event that isn’t on TV, but the “announcers” treat it that way.

Murray is kind of “indie film convincing” in the octagon (cage matches), but comes off too fragile to get in there and throw a punch. The wrestling part of the training, close-ups and sound effects of tendons straining, is far more realistic. And that’s due to editing.

She and the film collected a few lesser film festival prizes over the last year. Needless to say, I don’t see it.