The fanatic is unyielding in his beliefs, unbending in his attention to religious edicts and prayer-time.

He has heard the word “apostate” and the word “bitch.” And he’s taking matters into his own hands.

He is methodical as he wraps paper towels in tape, a DIY sheath for the paring knife he stuffs into his sock. He’ll knock on her door and…problem solved!

But this dead-eyed, dogmatic would-be killer is young. “Young Ahmed” looks to be about 15.

The latest thriller from Belgium’s Dardennes Brothers (“Two Days, One Night,” “The Promise”) is quietly chilling and subtly disheartening. It’s about a radicalized child, a state and a “system” that does everything “right” to compassionately change his heart. And time and again, we see those interventions just aren’t working.

The Dardennes discovered Idir Ben Addi who becomes EveryTeen in this, his debut film. Ahmed is dyslexic, so he requires after-school tutoring from Madame Ines (Myriem Akheddiou). His single mom (Clair Bodson) dotes on him. His older sister loves him.

But he’s spending all his time with the fiery young Imam (Othmane Moumen) and is almost wholly indoctrinated to the Islamic fundamentalism — no kissing or saying goodbye to women or girls, harsh judgement for “infidels” and “apostates.”

That he’s able to manage this in spite of every woman in his life reaching out, begging, arguing and even (in the case of sister Yasmine) pummeling him is a wonder.

Calling his mother “askarji” (a drunk) isn’t the last straw. She doesn’t even speak the language, but she knows an insult when she hears is. And that darned nuisance Madame Ines is starting an Arabic class so that Belgian Muslim kids can learn their parents’ language without getting that indoctrinating instruction “through the Koran” has Ahmed, his somewhat less fanatical brother and “plants” in the community meeting about the class pushing back against this blasphemous act. Ahmed puts the exclamation point on the debate.

“Your new boyfriend is a Jew!”

That’s when the kid crosses over, procures that paring knife and sets out to silence Madame Ines, if not every every woman who doesn’t adhere to his and his Iman’s doctrinaire idea of Islam, Arabic and women’s role in it.

“Young Ahmed” is mostly about what happens after that attempt — the detention center where he’s sent, the counselors and psychologist who try to accommodate his beliefs while teaching him empathy — getting him to tutor another boy in French, putting him to work on the farm dealing with animals, with a farm family and with their cute farm daughter Louise (Victoria Bluck). 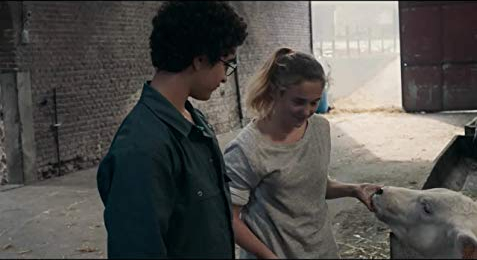 Filmmakers Jean-Pierre and Luc Dardenne set us up for predictable twists, and don’t always avoid delivering the expected payoff. Mostly, they do, maintaining suspense, keeping us guessing about whether or not any of this compassion is rubbing off on the kid.

Addi plays Ahmed as poker-faced, avoiding eye contact, on-task and losing himself in the structure and narrow path his passion for Islam gives him. He is every “rebellious” teen you’ve ever dealt with — with the stubborn certitude of one too young to know all that he doesn’t know.

Like its anti-hero, “Young Ahmed” is narrow in focus, intimate in detail and troubling in its monomania. Start to finish, it forces one despairing question on us, one it cannot answer.

Can “Young Ahmed” be saved?