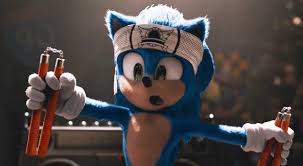 Projections are for the video game adaptation “Sonic the Hedgehog” to draw in gamers and parents with small kids to the tune of $50 million this weekend. As we got no data on Thursday night previews, we will not have a better idea until late Friday.

That’s good news for Paramount, which sets this one up as a franchise, thanks to a teaser at the end.

Mixed Reviews greet this crap script, James Marsden reprising his “get this animated costar to safety” turn from “Hop,” but at least Jim Carrey lands a much needed hit.

The soulful Buppy romance “The Photograph” is the best date movie option this Valentine’s Day. It’s on a lot of screens and could clear $12-15 according to Deadline.com

Mixed reviews for the remake of “Force Majeure” starring Will Ferrell and Julia Louis-Dreyfus. Dark comedy about a marriage wrecked on a ski trip? “Downhill” is hard sell on V Day.Maybe $4 or $5 million is the best they can hope for.

How far will “Birds of Prey” plummet? Are “Bad Boys” finally aging out of cineplexes? Stay tuned.