Posted on February 5, 2020 by rogerinorlando

Victor Hugo wrote the original “Training Day.” Or so it would seem, in the Oscar-nominated French thriller that takes the title of Hugo’s most famous novel, “Les Miserables.”

The title comes from the film’s Montfermeil (suburban Paris) setting. It is where Hugo’s hero, Jean Valjean, met the poor and downtrodden Cosette, a place of suffering, poverty, and crime in Hugo’s 19th century, of crime and police harassment now, in the shadow of a school named for Victor Hugo.

The film’s harrowing, violent and sometimes moving story is another variation of a “new cop, first days on the job” police procedural — the “Training Day” formula.

Ruiz (Damien Bonnard, briefly in “Dunkirk”) has just arrived from the provinces. It doesn’t matter what the chief says, his SCU (Special Crimes Unit) sergeant, Chris — nicknamed “Pink Pig” — is the one who lays down the law, and the insults. The new guy is henceforth to be known as “Greaser.”

And what Chris (Alexis Manenti) says, goes. He and his longtime partner Gwada (Djebril Zonga) ride the district housing projects in an unmarked Peugeot. Not that “everybody” doesn’t know their car. They’re “pro-active” police, trying to keep a lid on an Afro-Arabic melting pot that’s always on the verge of boiling over.

“Like Miss France,” swaggering Chris cracks (in French with English subtitles), “all I want is ‘world peace.'”

To Chris and Gwada, that means showing the colors — stopping, frisking, hassling teen girls at a bus stop for smoking hash, leaning on tween to teen boys, but also intervening to do favors for “The Mayor” (Steve Tientcheu).

As a general rule, Chris is heavy-handed and rough, and Gwada, first generation French himself, goes along with it. Between these cops and the local Muslim Brotherhood, which stages non-violent interventions to scare kids back in line and urge their parents to better control them, the housing projects have enjoyed relative tranquility…since the last riots engulfed the place.

But two kids we meet early disrupt their “world peace,” test Pink Pig’s toughness and force the new guy — who is constantly counseling calm and “Easy, easy” during frisks — to come to terms with where he is and if he has a place there. The local adults, who resentfully tolerate the police, will be the wild cards, here.

Issa (Issa Perica) is a punk, his latest bust coming from stealing chickens from a local. Buzz (Al-Hassan Ly) is a bespectacled introvert whose nickname comes from his new — a camera drone. Issa has a mind for mischief, and Buzz is forever parking his drone outside young women’s apartment windows — videoing things he shouldn’t.

When a lion cub is swiped from a visiting Gypsy circus, the guys from the circus arm themselves with knives and clubs and turn the public address truck they’d been using to advertise their show into a cruising tirade of threats and demands for the cat to be returned.

The first fraught confrontation facing this SCU team is throwing themselves between Gypsies screaming racist curses and threats at the Mayor and his neighbors. One wrong move, or one clumsy bit of miscommunication (the Gypsy “king” — Raymond Lopez — is too enraged to be coherent) and they’ll have a riot on their hands.

Finding that cub will keep the peace, and that entangles the SCU, the Mayor and an ex-con who has deepened his devotion to Muhammed — the serene but menacing Salah (Almamy Kanouté). Tactics, tact and the lack of it will be hurled into this decaying situation with the threat of violence hanging over every confrontation, even every negotiation. 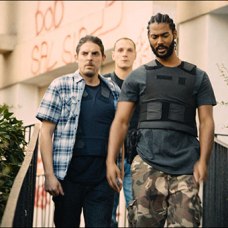 Ladj Ly (“Go Fast Connexion”) adapted his streetwise short film about these characters and this neighborhood into a feature-length story, and makes the suspense almost unbearable even as the movie takes us into situations we’ve seen many times and characters we know by many names — usually not French.

The film begins as a sort of “The French Way” essay in non-lethal police confrontations. The cops are just as testy, can be short-tempered and intolerant, as police come off — at times — in the U.S. But nobody is quick to pull the trigger, and police veterans and newcomers seem willing to risk being injured and loss-of-face to de-escalate tense situations.

With mass violence always in the back of their minds, these cops rely on a shock-and-stun weapon, the flash-ball, to back crowds off and intimidate their criminal adversaries.

But “Les Miserables” shows how those efforts can come to naught, or go terribly wrong. Ruiz may be judging the hard-boiled men he is thrown-in with, taking pains to keep his humanity and ethics. He openly wonders if their “tough” tactics are bearing ugly fruit. But even he sees the flashpoints they’re constantly dealing with, the terrifying situations that make survival instincts kick in.

And the locals? The “Us vs. Them” mentality the cops foster might fester, even without police hassling. But lax parenting is allowing teeming masses of teens to roam and get into macho mischief which can lead to bigger crimes.

But fence-straddling point-of view and well-worn story beats aside, Ly has crafted a tight, gimmick-free thriller that begins with a France united by a World Cup victory, and ends with a culture as divided — by class, means and want — as Victor Hugo saw it way back in 1862.

The more things change, the misery stays the same.

MPAA Rating: R for language throughout, some disturbing/violent content, and sexual references