Posted on January 20, 2020 by rogerinorlando

Foreign language films, or “international” films as the Academy of Motion Picture Arts & Sciences now calls them, immerse you in a culture, and the good ones — no matter the subject, can tell you a lot about a place without ever visiting.

Brazil is very much on the cinema buff’s radar this winter, thanks to the Oscar contending documentary, “The Edge of Democracy,” about the one-time dictatorship’s loss of democratic rule to a recognizable alliance of the very rich, the very racist and the exceptionally gullible.

And then there’s the scalding “Christmas special” titled “The First Temptation of Christ,” which drew violence and protests in Brazil and calls for a Netflix boycott in the U.S. when it popped up on the choices of the easily-offended this holiday season.

Both those films are instructive if you choose, as I did, to do a deep dive in Brazil via Netflix offering the paired preacher bio-pics “Nothing to Lose” and “Nothing to Lose 2.”

I’d never heard of the charismatic and “entrepreneureal” Protestant preacher Edir Macedo, who megachurch-based media empire made him famous and rich, and attracted unwanted attention from Brazil’s government and supposedly its Catholic Church.

He looked at the rituals of Catholicism, as practiced in the backward Brazil of his youth, and found his calling — preaching the gospel, in parks and street-corners, practicing direct action Christianity by caring for the homeless, failing healing, etc.

And by the ’80s he was such a “threat” he was getting hounded by the government, eventually jailed under charges of money laundering and a laundry list of other infractions.

But when your ministry is as rich as his, with his own TV channel at home, adjunct ministries around the world, you can do what Billy Graham and the Mormon Church have done in the U.S. — put your message, your “version of the story,” into movie theaters.

The two films cover much of the same ground, stories dominated by Macedo’s persecution — or persecution complex — and depiction of his indomitable spirit.

“I like to say I have broad shoulders,” “Bishop” Macedo (Petrônio Gontijo) modestly declares (in dubbed English if you choose, or the original Portuguese). “It’s one of my duties, to be a lightning rod for the church!”

“If Jesus had his disappointments, why shouldn’t we? We trust the Holy Spirit, and he is leading this mission!”

The films are both artless exercises in agitprop, the dialogue dull, scenes flatly staged and shot in soap opera fashion — save for the sermons, the arrests and a little trip this modern day prophet took in imitation of his idol.

Gontijo comes off as far more convincing and “charismatic” in the original Portuguese, however. And even though the films recycle the persecution, with mustache twirling police, state and Catholic officials scheming to find something to charge Macedo and his “cult” with, and him blithely telling his inner circle the obvious.

“It’s obvious they want to attack me…So much disrespect for the Bible!” 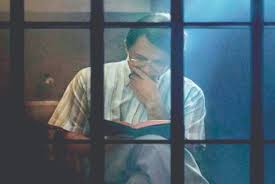 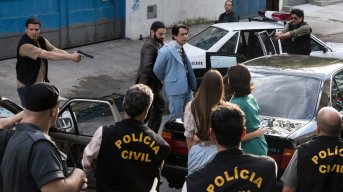 “Nothing to Lose 2” is one of the most pointless sequels ever, as it recovers too much of the same persecuted and rising above it ground.

But “Nothing to Lose” is far more interesting, as “origin stories” inevitably are. We see Macedo’s doted-on childhood, kid teasing him with the nickname “Pinky,” and his teen awakening to the puzzling hilarity of all these rituals on the Catholic calendar — parades with statues of the corpse of Jesus, or of the virginal Mary.

“Is God dead or alive, Dad? If the Bible is true, to make people believe in the image of a DEAD God makes no sense!”

He starts showing up at altar calls in a local Protestant church, finds the woman who shares his beliefs and his life, Esther (Day Mesquita), starts pulling homeless people into the church he’s attending, and when that’s frowned on, sets up on his own.

Can assuming the title “Bishop” be far behind? Jesus went to Sinai for his moment of truth. Macedo and his entourage take a Cook’s Tour just to walk the same path — if only briefly.

And how can a man get this rich if he’s really that busy helping the poor in a country where poverty is as racial (virtually no black Brazilian faces show up in either film) as it is endemic?

But if there’s nothing else one takes away from “The Edge of Democracy,” it’s that the powers that be have been paranoid about anybody mobilizing a great following, and that as we learned from “The First Temptation,” people there take their religion violently serious.

So the movies neither make the case that Macedo is the con man the government says he is, nor gives him self-manufactured, self-financed exoneration.

And both are dull enough that the reports out of Brazil, that his Universal Church of the Kingdom of God made the films, bought out theaters to show it, gave away tickets to both films, and still couldn’t get people to show up.

Seeing the movies, you understand. As a movie producer, Bishop Edir Macedo is still just a street corner preacher with a megaphone — small time.

Credits: Both films directed by Alexandre Avancini, scripted by Stephen P. Lindsey and Emílio Boechat , based on the memoirs of Edir Macedo .