In America and much of the rest of the world, the Battle of Inchon is celebrated as the masterstroke of General Douglas MacArthur’s career, a surprise United Nations amphibious assault behind enemy lines on a beachhead with some of the highest tides in Asia.

But in Korea, they remember a pivotal diversionary attack that made Inchon (or Incheon) possible. That’s why “Battle of Jangsari” is already a blockbuster south of the 38th parallel on that peninsula.

It’s a solid combat film, a visceral, sentimental account of that assault by the Republic of Korea Army, another battle against impossible odds and one fought by teenaged volunteers, most with only 10 days of training, soldiers too green to even have been issued service serial numbers.

Releasing it in North America (in Korean, with English subtitles) reminds us that whatever the differences in training and tactics from nation to nation, modern war films have the same tropes, values and action beats the world over.

In combat film buff shorthand, it’s a a “Saving Private Ryan” styled story of ptriotism, heroism, sacrifice and viscious hand-to-hand combat on the beach at Jangsari and in the trenches that overlook it. The youth of the “assault team” is treated with “Field of Lost Shoes” reverence. And there’s plenty of “Gallipoli/Hamburger Hill” cynicism, too, the callous high command, the ally (the United States) that might not be the omnipotent, righteous savior that we here in the U.S. like to attach to our intervention there.

The “men” of Captain Lee (Kim Myung-Min) are not even old enough to wear that label with confidence, most fresh-faced kids not even of shaving age yet. The 772 student volunteers are seasick as they ride out a typhoon on their way to the beachhead.

The ship’s captain can’t believe the “suicide mission” these kids have been ordered to undertake, distracting the North Koreans, who’d invaded South Korea three months before, while MacArthur’s armada slipped north to cut most of the enemy off, a trap that would all but destroy the North Korean army.

Neither can an American reporter, Marguerite Higgins (Megan Fox) embedded at HQ and privy to the particulars of the attack. The CO (Robert Eads) she gets her scoops from tells her to “keep your bags packed.” If this attack, and then MacArthur’s fail, the North Koreans will finish overrunning the country.

There’s talk of spies everywhere in this newly-independent, newly-divided country. “Battle of Jangsari” reminds us that this may have been a Cold War “test” between the US and Russia and China. But in Korea, it was brother against brother, cousin against cousin — personal and bloody and bitter.

There’s promise of air support and a naval bombardment. But mere radio contact is hard to maintain en route. Captain Lee knows its all on them and trots out the “Can you exist without a country?” pep talk. The boys are fired up, if not exactly “ready” for all this.

The first big act of sacrifice is when the ship’s captain is convinced to run his vessel aground rather than let the troops be slaughtered on their way to shore in the few tiny inflatables they’ve been alloted for this attack.

Just getting to the beach is as nightmarish as every resisted beach assault in history, “Iwo Jima” awful.

And once there, the carnage doesn’t let up. We’re treated to a truncated version of “The Longest Day” as the Captain and an enterprising sergeant or two strategize, improvise and give their young charges a fighting chance. 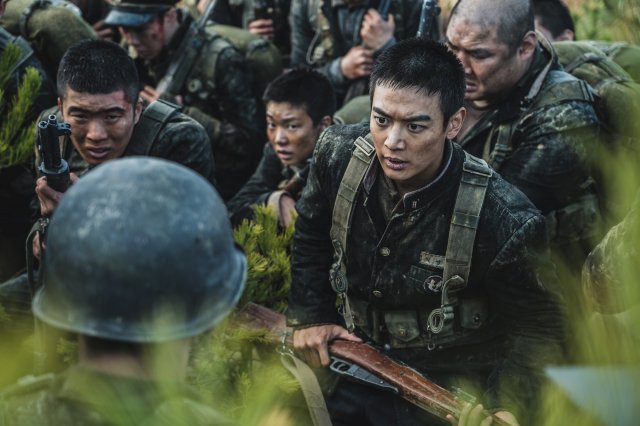 The uniforms are different, but so much of what’s shown here will be familiar to anybody who’s ever seen a combat film. Grunts boast of their sharpshooting prowess, curse and bully each other and make clumsy mistakes the way kids who have never held a rifle before 10 days do.

There’s more weeping than your average American war movie, and a little hand-holding. The Captain administers corporal punishment, at one point.

One of the recruits, the one who can recall his “northern accent,” is Choi Sung-pil (Choi Min-ho), a refugee from the north. Some don’t trust his loyalty, but the Captain leans on him to fool North Korean patrols when he leads a foraging party into the nearby town.

“Are you guys butchering that dog? Could you share?”

The fighting? In your face, gory, with action broken up into groups of two, three or four, comrades saving each other, or failing to. We get back stories from the plump private who worries about the lack of food, from the bully with a sad back story that explains his bullying, a sad story that will change “when I come back home a hero.”

Yes, some of the cast is fleshed out with K-Pop stars turned actors, just as in Christopher Nolan’s “Dunkirk.”

And then there’s the whole “suicide mission” that the pushy American reporter keeps throwing at American and Korean brass. They’re under-equipped and under-supplied, with no prospect of evactuation, resupply or reinforcement, with only a badgering journalist to appeal to the conscience of HQ.

There are some grand action sequences, an “ambush” built on a ballsy bit of bluffing from a sergeant (Kim In-Kwon) who’d be right at home in a John Wayne movie.

And it’s striking how much the real Korea looks like the one most Americans have seen in reruns of the movie or TV series “M*A*S*H” — shot in Southern California.

“Jangsari” is immersive and involving, the way the best combats are, and jjust Korean enough to make us appreciate the differences between cultures and alternate views of the history of the war. Sometimes, the country known for coining the phrase, “the cavalry comes to the rescue” doesn’t live up to that.

That’s a message that speaks to audiences in modern Korea and present day America just as loudly.