British to a “T,” and so twee you’d swear Wes Anderson had a hand in it, “Sometimes Always Never” makes for a perfectly wistful Billy Nighy star vehicle.

It’s so soft spoken and so little happens in this story of the emptiness brought on by loss, fine tailoring and Scrabble that you might miss its whimsy. But it’s there, blended in delicate proportions with the bittersweet.

The sartorially celebrated Nighy plays a quietly-obsessed Scrabble-hustling tailor in “Sometimes Always Never,” a man we meet on a lonely beach, waiting for his son.

Sam Riley (“Pride and Prejudice and and Zombies”) is that son, Peter. Peter’s not quite as buttoned-down as his dad, but neither is all that demonstrative. Peter, the composer of commercial jingles, takes the wheel of Dad’s immaculately-kept vintage Triumph Herald convertible and motors down the coast to the town where they have an appointment.

Government austerity means the office they’ve been called to is closed, but father Allen ( has anticipated that. He’s booked them a room at The Royce, a B & B. He’s methodical, meticulous and fastidious, as you might expect from a man in his profession.

And he’s comfortable with every one of those synonyms, because he is, in American parlance, a word freak. He’s deep into Scrabble.

We aren’t so much told this as we quickly figure it out as he play-acts his way into a hustle at The Royce. It begins when he asks for the Muzak to be turned down.

“I always say, ‘The only good thing about ‘jazz’ is that it scores very highly in Scrabble!”

That prompts a correction from a husband (Tim McInnerney of “Notting Hill”) Arthur, who soon suggests a game to Allen and Arthur’s wife (Jenny Agutter of “An American Werewolf in London”). When Margaret isn’t listening, Arthur proposes that “we make” the game “interesting.”

But it’s only after the hustle is set in motion that Allen figures out they they’re here for the same reason as he and Peter. They’ve been called to identify a body. Their 19 year-old son went missing. Allen’s did, too, some years before.

Whatever the loss of his brother did to Peter — and the uncertainty of his fate is grasped as a last straw — Allen seems lost, embracing the distraction of Scrabble, online mostly. He goes on and on about words, strategies, big-scoring plays and the “101 two letter words” in the English dictionary, because “two letter words are your friends.” 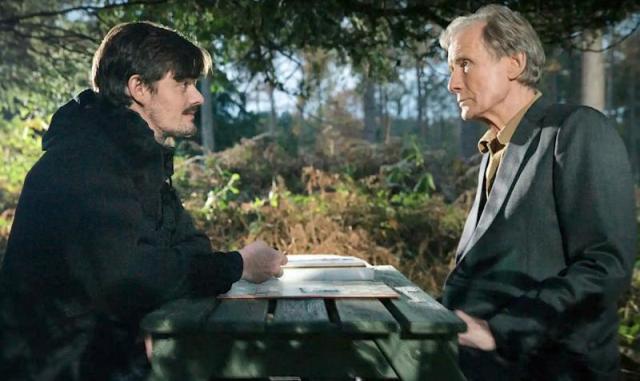 He prattles on to Peter’s wife, Sue (Alice Rowe) and their son (Louis Healy) after passive-aggressively inviting himself to stay with them. He’s full of useless trivia about the reasons Canada doesn’t allow the import of a certain vile English spread for toast.

“The people of Canada,” and all their vast land mass, “don’t have Marmite!”

“How DO they get by?” Sue plays along.

That’s the tenor of the humor here — subtle. Words matter to Allen, and they come to matter to his role-playing game-addict grandson. Before we know it, young Jack is correcting his mother’s use of how “inconvenient” it is to have his granddad sleeping in his room. No, it’s “disquieting, disorientating, awkward, destabilizing, unsettling…”

And that’s accompanied by dapper Allen giving a makeover to the kid, making him “spruce” enough to tickle the kid’s girlfriend (Ella-Grace Gregoire).

The mystery at its heart doesn’t so much drive this story as chases that missing-son from a B & B to a marina, never quite achieving closure. It’s based on a script by Frank Cottrell Boyce, the British screenwriter of “Goodbye Christopher Robin,” “Millions” (for Danny Boyle) and many Michael Winterbottom films such as “Welcome to Sarejevo” and “24 Hour Party People.”

Director Carl Hunter cut his teeth on British documentaries, and seems ill-suited for the material — leaving laughs on the table like a poker player lacking nerve. The central relationship wanders off screen for the middle acts, and for all the minor delights that assorted scenes and the wonderful players hired to perform them (Agutter and Lowe stand out), it isn’t the most coherent story, “mystery” or not.

But Nighy brings so much of himself to Allen that many of those rough, expositional or inconclusive edges are rubbed off, or at least shoved into the background.

Whatever its value to a British audience, “Sometimes Always Never” has enough outside-looking-in charm, and Nighy, to make it nice fit to any Anglophile filmgoer.

MPAA Rating: PG-13 for thematic elements and some sexual references