Sometimes you wonder if Netflix even bothers watching all of the movies they write the checks for.

I mean, there are thousands of titles, so I get it.

But “Oh, Ramona!” makes you really…wonder.

It’s filled with nubile young women in eroticized school girl uniforms, callous, coarse pre-#MeToo boys who aren’t in their league with the two best looking young women in the cast both falling for the nebbish played by Bogdan Iancu.

It’s lazily smothered in insipid, cloying voice-over narration about all the things Andrei (Iancu), wants out of life with a girl, all delivered in his cutesiest 16 year-old Romanian-accented voice.

“We totally were NOT doing drugs…There could be cops in the audience!”

“Wait a minute, I can’t show you this part! There are children in the audience, for God’s sake!”

And fat girl jokes. Did I forget those?

Nerdy-horny Andrei narrates even the things we can see for ourselves.

Andrei has lusted after short-haired teen pixie Ramona (Aggy K. Adams), who gets a little wound-up at a party and grabs him. 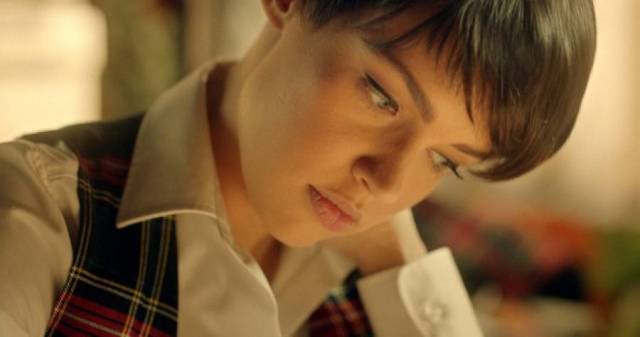 But wait. Andrei’s a talker, and not just in voice-over. Talk talk talk.

“I’m not like all the other guys…” And then, “I just can’t have sex with a girl if we’re not in a relationship.”

But. But. But. “I’m the hottest girl in school…and you’re….YOU. Stop being silly.”

Thus things turn to a series of disastrously public failures with Ramona. She takes up with a boy who hits her, and she’s mean enough to tell everybody Andrei did it.

His foul-mouthed single-mom (Andromeda Godfrey) coaches him on the phone while asking girls out, and when she decides that they need a vacation, Andrei meets the other supermodel-to-be who takes an interest in him.

Front desk clerk Anemoma (Holly Horne) is putty in his hands, thanks to his “gold medal pick-up line…’Hey, pretty…do you believe in love at…first sight?'”

And his attempt to serenade her, beachside with a little Elvis, seals the deal.

The boys here are insanely banal and drab characters, and yet every young woman — stunning to Mama June-ish — longs to sex them up. More visual euphemisms, more lollipop licking.

Mom gets the best line — “Between now and your 50s, you’re going to have so many women to disappoint.”

Romania looks lovely and perfectly visitable — if not for the creepy boys who no doubt grow up into creepy cave men.

Perhaps it’s comforting to some that there are selfish, oafish frat-boy types on both sides of the Iron Curtain.