Posted on June 3, 2019 by rogerinorlando

Here’s a kids-save-the-world action — um, comedy? — from McG that plays like sci-fi that just got its training wheels off.

“Rim of the World” puts a quartet of summer “adventure” camp wiseacres between us and alien invasion-driven extinction. Sure, the safe money’s on the kids.

Because they’re all stereotypes, and there’s a smart if cowardly white boy, a brazen black kid, a tough tween on the run from “juvie,” and the obligatory smart, brave and inscrutable girl who just got in from China.

This could be the laziest screenplay you’ll watch or hear this year, so mark down this title and the date you saw it, not to mention the name under “script by” at the bottom of this review.

The nerdy coward Alex (Jake Gore) has lost himself online since losing his father in an accident.

“There is a whole world out there beyond these screens,” Mom (Annabeth Gish) counsels.

That’s why he’s going to camp in the mountains of Southern California.

Dariush (Benjamin Flores Jr.) is all blinged to the max, a rich kid whose Mercedes dealership daddy shipped him off to campn Rim of the World.

Zhenzhen (Miya Cech) is like a Red Chinese cartoon, a red beret-wearing mute whom we KNOW will open her mouth at just the right moment to save the day — repeatedly.

Gabriel (Alessio Scalzotto) is the boy-band-ready kid they stumble into who claims he just escaped from juvie when World War Aliens began.

It begins with the International Space Station getting chewed up (common in such movies) and bursts into an “Independence Day” blast of explosions and dogfights between the Air Force’s finest and the interstellar travelers’ own inexplicably just-as-primitive fighter jets.

There’s this key that a scientist entrusts to the survivors to get to Jet Propulsion Laboratory.

The kids aren’t all as nerdy as Alex, mixing up EMP and EDM, and more amusingly “TRL” with JPL.

The film’s opening act has the kids leaving for camp, and checking into it — one lame joke follows another as “Ginger Nugget” (Alex) gets his first teasing by the profane and under-or-OVER-committed camp counselors.

“Our musical this year is ‘Fiddler on the Roof!”

The tone is set early on, with the odd off-color double entendre (Netflix’s kids’ movies have that “edge” — all of them), the obligatory over-use of “bitch”and Dariush playing that worn out stereotype, the over-sexed black man — in 13 year-old form.

“I got game…Girl, is this our layover? Because we’re making a connection.”

Other camp counselors of color ask, “Why we talkin’ like black men from the ’80s?” As do we all.

Dariush is a bottomless pit of cornball one-liners.

No, don’t leave him in the woods overnight.

“I don’t do so well with bears. I’m not fixing to get DiCaprio’d up in here!

The direction by the once promising McG is lackluster and perfunctory. The characters and dialogue lurch between clumsy homages to “Goonies” and “E.T.” — stuffed with self-aware references to the screenplay’s origins.

“Guys, we should turn back…I’m tellin’ you, this is how people die in movies!” 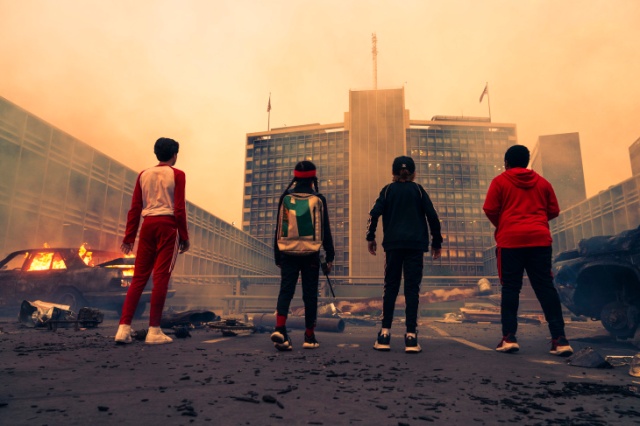 Their odyssey takes them from the mountains to Pasadena, past over-matched soldiers and opportunistic ex-cons, by bike and any handy car that has the keys left in it, which has to be a vintage ride because no car with computers in its electronics (save for the Humvees, because again, this script is clumsy) will work after the EMP blasts that crippled Earth.

Only the girl from the East has the answer to every dilemma.

“What do we in life echoes in eternity!”

“Did she just quote ‘Gladiator?'”

Some of which, to be frank, your average twelve year-old may dig. If they’ve seen “Gladiator,” that is.

Adults? We should know better.