Documentary Review: Arnold S. and the Cousteaus urge us to save the “Wonders of the Sea”

“Wonders of the Sea” is an undersea “Isn’t nature amazing?” documentary that manages to find new sights to dazzle us, decades and decades after Jacques Cousteau introduced us to “The Undersea World.”

Narrator Arnold Schwarzenegger calls this film, co-directed by Cousteau’s son, “a declaration of love” because “you always save the things you love.”

It’s not an environment-in-crisis film, although that’s a given. The filmmakers have conjured up a picturesque underwater travelogue, an “eight thousand mile” tour of all that we’ll lose if we don’t do something about plastic, seafood consumption and carbon-burning-driven climate change.

With so many other films using the same general setting, “Wonders of the Sea” wisely zeroes in on smaller life and odder creatures with exotic names — The Mermaid’s Wineglass, The Christmas Tree Worm, The Crown of Thorns Starfish, The Stone Scorpion Fish, “the most dangerous” venomous fish on Earth. 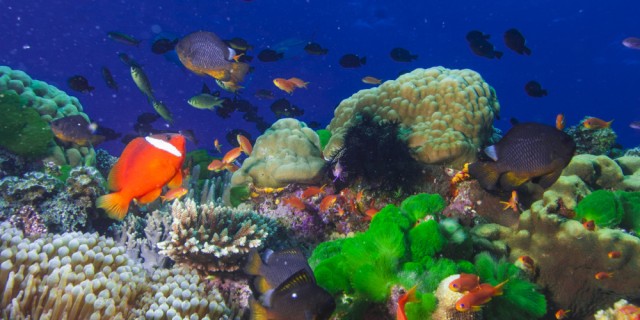 It’s all lovely to look at, and you gain an appreciation for the new tech the crew mention in the opening moments of the film, cameras and gear that allow such dazzling (often minute) images to be captured.

But as I listen to the quartet of narrators (Cousteau’s son and two grandchildren share flatly-voiced speaking duties with him and Schwarzenegger, a poor decision), I wonder about things like why they didn’t use a “greener” ship to make the voyage, something Jacques was constantly heralding.

With the oceans in such awful shape, setting an example is important.

Perhaps the Cousteau family has forgotten the mockery the patriarch’s cloying French-accented narration (he had his own series on ABC in the ’70s) became a cultural punchline, back in the day. You’d think they’d avoid precious banter among themselves — “Okay, Papa!” — and leave most of the narrating to the Austrian-accented movie star.

Still, we have never seen how gorgeous a giant clam is when it opens its mouth.

“Behold, the humble flatworm…the multi-colored magic carpets of the reef.”

And it’s helpful to be shown the bum rap sharks have gotten and the vast array of threats the sea’s top predator faces, from shark fin soup slaughter to “by catch” waste that kills 100,000,000 of the them every year.

“Wonders of the Sea” doesn’t break much in the way of new ground. We’ve seen slow-motion sting-rays, spiny lobsters, hermit crabs, octopi and moray eels before.

But the extreme close-ups, vivid colors of the various habitats the Cousteaus take us are worth the price of admission. And if ever there was a time we need to be reminded of what we need to save in the briny blue, it’s now.