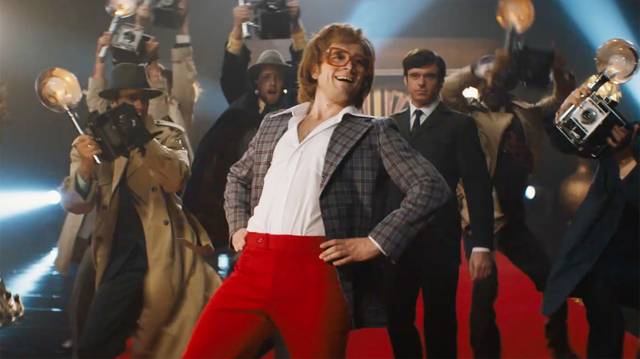 “Rocketman” is a proper musical, with lots of tunes, big production numbers and the actors doing their own singing.

As the songs are from the extensive, radio-dominating Elton John songbook, there are scores of them most of us know by heart. And as star Taron Egerton is better at enunciating than Elton ever was, Bernie Taupin’s lyrics pop out to great effect.

The lead is a reasonable facsimile of the former Reginald Dwight turned Elton Hercules John. And if Egerton’s singing voice isn’t exactly a chart-topper, he’s an acceptable singing alternative at least faintly resembling the real thing.

Elton John’s life and dirty laundry are hung out, and “Rocketman” is far more open about the singing sensation’s sexuality than say, “Bohemian Rhapsody” was, as indeed Elton was and Freddie Mercury wasn’t. He taught a generation the word “bisexual,” and how it could be used to soften the news of a famous person “coming out.”

But damn, “Rocketman” is a slog, a nearly joyless musical that threatens to take flight at several near-tingling moments and never does.

It’s as if the “miserable Elton” of his alcoholic years, and his latest years (the grumpy tantrum tossing concert-quitter) was final arbiter of the tone of this. And so it’s all “I’ve had an unhappy time of it, now it’s YOUR turn.”

Little Reggie (Matthew Illesley) can show off his uncanny ear and piano score memory and burst into an underage “The Bitch is Back,” and you grin and think, “Here we GO!” Teen Elton (Egerton, of “Kingsman” and the godawfulest Robin Hood on record) can play, dance and duck through a pub as director Dexter Fletcher’s camera chases him into the streets belting out “Saturday Night’s Alright” (for fighting), and you lean into the picture, expecting more of the same.

Nope. It’s more about a little boy’s “When’re you going to HUG me?” to his priggish, heartless dad (Steven Mackintosh), a tween Reggie (Kit Connor) stumbling across his cheating, self-involved Mum (Bryce Dallas Howard at her beady-eyed, Brit-accented best) or a drinking, lonely superstar Elton hearing “Nobody’ll ever love you” from that same Mum, or the seductive, handsome but faithless lover-manager John Reid (Richard Madden)

And Taupin? As portrayed by Jamie Bell, who almost steals the picture with a single alternative take on “Goodbye, Yellow Brick Road,” Taupin is Elton John’s savior, champion and the movie’s patron saint.

“Rocketman” is told in a flashback his first visit to AA, in a Satanic vamp stage costume, perhaps the corniest framing device in the history of musical bio-pics. The film tracks his story from piano prodigy, with only his beloved grandmother (Gemma Jones) keeping the faith and encouraging him as he dazzles the family, then a Royal Musical Academy teacher by repeating the “Rondo Alla Turca” (by Mozart) she just played, even though he’s never heard it before.

We get a taste of his first rock band, a moment of touring in a van, a not-their-real-names bit of backstage advice and seduction from an American 1960s soul music tour — “You’ve got to KILL the person you were born to be in order to become the person you WANT to be!”

That magical first meeting with the man who would become his real life partner, “the brother I never had,” his lyricist Bernie, is held in freeze-frame. So is that first “I’ve got some lyrics that need music” passing of a manila envelope.

There’s just a touch of the young agent (Charlie Rowe) who hears and sees something in him, and the crusty grump (Stephen Graham) who doesn’t.

A favorite sequence in such movies is that “breakout” moment. For young Elton, who stole his name from a bandmate and John Lennon, that was a canny booking (by that crusty old agent) at LA’s Troubadour, run by the flirtatious, hip and “Far out!” Doug Weston, given a laid-back charm by Tate Donovan. 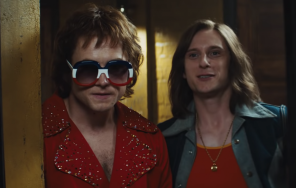 Fletcher, who did “Eddie the Eagle” with Egerton, lets his star get away with a few too many closeups jammed with bad, hammy, mannerisms. And he can’t keep this picture moving forward to save his arse. “Rocketman” lurches along between songs.

But what songs. You may be startled, as I was (and I owned a lot of these records in my youth), at the breadth and complexity of what this duo composed and recorded, something brought out in the tempo changes to some of the performances and Egerton’s care in making every word heard.

We get precious little of the “magic in the studio” stuff that “Bohemian Rhapsody” made its bread and butter. A little “Border Song” here, a bit of Kiki Dee there.

The film rearranges the chronology of the tunes to use them as devices to fill in the biography, and that highlights the Achilles Heel of the Elton/Bernie songbook, their maudlin streak, a tendency to lapse into bathos.

The film, likeable though it generally is, despite having the best possible screenwriter (Lee Hall of “Billy Elliot”) on board, echoes that. It actually resembles “A Star is Born” more than “Rhapsody” in that crawl-into-a-bottle-and-cry regard.

And its celebration of sobriety, rehab and AA meeting therapy is commendable, if dramatically blasé and nothing new.

Which begs the question, as the closing credits celebrate the triumph over that old agent’s warned pitfall — “Don’t kill y’self with booze and drugs!” Which is better, a posthumous hagiography presided over by the adoring and investment-protecting surviving members of your band, or a downbeat, supervised/subject-approved “my version” big screen “autobiography?”

MPAA Rating: R for language throughout, some drug use and sexual content