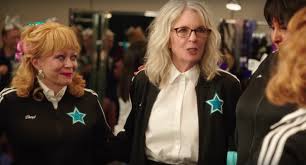 It’s not necessarily for you. Maybe it’s not “the perfect movie” to take Mom to for Mother’s Day

Unless you want her to write you out of the will.

But if Mom is a grandmom? Well, darling, “Poms” could be right up her alley.

This less than challenging lightweight Senior Citizens Swear and Act Silly farce is built around Diane Keaton, who is showing a determination to keep working even if the movies aren’t up to the films that what she became famous for. Here, she’s got an age-appropriate supporting cast that is grateful for the work.

And they’ve made a comedy that’s going to resonate with anybody over 70.

There’s the grandkid stealthily living with granny (Jackie Weaver) in a stupidly strict retirement community, the steady stream of new arrivals and those “checking out” from “Sun Springs,” the obnoxious son trying to rule his aged mom’s life and a widow suddenly freed from the strictures of a suffocating, “He’s the Boss” marriage.

Yeah, there are “Break a hip” jokes and the best “Over my dead body” gag in recent memory.

None of which makes “Poms” a classic, or anything more than barely passable, even in the eyes of its target demo. But if you’re on your third or fifth AARP card, it plays.

Keaton plays Martha, a single, childless New Yorker we meet on the day of her “estate sale.” No, she’s not dead, as confused shoppers wonder about the person whose stuff they are perusing. But she’s got cancer, and she’s rejecting any further treatment/.

There’s nothing for it but to load up the Subaru and make for Sun Springs retirement community in Georgia, which is where folks without the stamina for Florida end up.

It’s a controlling, over-regulated little piece of shrubs-must-be-cut-just-so and Christmas decorations must be down by Jan. 2 sort of place, lorded over by steel magnolia Vicki (Celia Weston, terrific).

“Wayl, I thank we can aim a mite higher’n that,” Vicki drawls.

Martha’s new neighbor (Weaver) is pushy and on-the-make, hosting all-men poker games, trying to enlist Martha in the “fun.” Martha’s not having it.

But the rules state she “must join” one of the hundred or so clubs there. As neighbor Cheryl took a shine to Martha’s old cheerleading uniform, that’s what they resolve to do — form a  cheer squad.

Documentary filmmaker Zara Hayes directed this (the story was her idea, too), and has modest fun in the “audition” montage — women like Pam Grier shaking their groove thing, trying to make the squad.

The rehearsals, set to The Go Gos and Portugal The Man, are almost cute.

Charlie Tahan is the shy grandson brought in to DJ the rehearsals, Alisha Boe is engaging as a high school cheer captain who journeys from contempt to admiration.

Rhea Perlman may not have enough of a character to play. But the always entertaining Bruce McGill plays the head of security at Sun Springs, old enough to realize “enforcement” there is beneath him, not smart enough to figure out a way out of every call for a noise disturbance or what have you.

Keaton is top billed, but it is Jacki Weaver (“Animal Kingdom,” the movie, not the cable series) who owns the picture, the sassy, salty “grown ass woman” who over-instructs the high schoolers she substitute teaches in sexuality, and turns a teen’s sneering “Break a hip” wish for luck into “Get pregnant.”

The jokes are strictly low-hanging fruit, but the film’s predictable path takes just enough care to avoid the places we’re sure we’re headed to sustain its 91 minutes.

It’s not exactly good, nor does it merit the sort of scorched earth reviews some of the children who couldn’t figure out why “Long Shot” wasn’t that funny and wasn’t exactly a hit.

Maybe you don’t get it. Maybe grandma and grandpa will.

MPAA: PG-13 for some language/sexual references.