Bond 25 returns 007 to his birthplace, Jamaica

This past couple of weeks’ press events and production stills of Daniel Craig getting back into the James Bond saddle for location shots have gotten me thinking about the long history of the franchise and why the 25th film in it, quite rightly, kicks off in the place where 007 was born — on Ian Fleming’s typewriter.

I’ve gone down the Youtube rabbit hole, digging through the archives of DVD features docs and BBC productions to look into Ian Fleming’s career, his building of his seasonal getaway, Goldeneye, and the choice of “Dr. No” as the first book in the James Bond series to be filmed when it wasn’t the first novel on the character which Fleming wrote and published.

This “Making of ‘Dr. No'” doc seemed like a good place to start. It reminds us of the blind luck of casting Sean Connery in the role (“David Niven” was one of Fleming’s suggestions, and Cary Grant was floated about. The producers wanted Roger Moore, who had that Grant and Niven lightness about him, but he was tied up with TV at the time.)

She has a lot of fun digging through Fleming’s past, taking us to the Whitehall Office where he got his first taste of spying during WWII, visiting Goldeneye, chatting up experts. It was filmed and shown just before “Quantum of Solace” was released.

All these details Fleming, pre-product placement, put into the books — some of which made it into the films. Bond’s favorite gin, like Fleming’s? “Booth’s High & Dry” (no longer bottled, alas. I checked.) His choice of lighters, suits, shirts, watches, etc., all poured into the package both by Fleming and by the team that pulled together “Dr. No.”

It probably doesn’t matter than the great Danny Boyle quit the new film because the producers didn’t buy into the “new direction” and “interesting take” he had on Bond. Well, maybe it does.

And it certainly matters than Daniel Craig treated the last film, “Spectre,” as his curtain call and apparently only reluctantly came back into the series “one last time” — resulting in endless “diva on the set” stories.

It’s not a good thing that they started without a polished script, and that the whole affair is being pieced together almost on the fly. 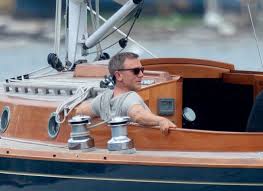 But starting in Jamaica, parking the “retired” Bond there — living happily, sailing as much as the wind permits — to open the new film? That’s perfect, and should get all involved back into the 007 swing. It inspired Fleming to conjure him up and Jamaica could inspire Craig & Co. to embrace that “licensed to kill” vibe one more time.