Movie Review: The Horrors one finds on “Hallowed Ground” 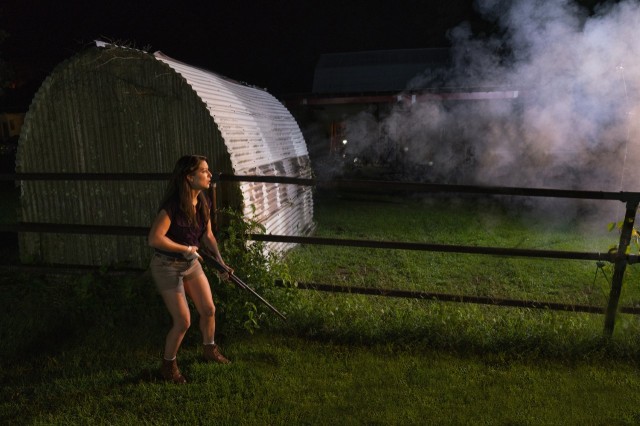 Here’s a hunk of horror as slow as MO-lasses on a cold day in Natchez.

It’s about a blood sacrifice cult kept barely at bay by Native American spirits in the Bad Dentistry Belt of the Deep South — rural Mississippi.

And it’s about a lesbian couple that runs afoul of said cult on a make-up/make-out weekend in the backwoods. Haven’t these two love birds (Lindsay Anne Williams, Sheri Eakin) seen “Duck Dynasty?” Not where they should be going.

Alice (Williams) cheated on Vera (Eakin), and now they need a little quiet time…SLOW quiet time — to get back to where they once belonged.

But the solemn, self-serious greeting of Nita (Mindy Van Kuren) at the lodge where they’re to stay should be a warning.

“You’ve entered a sacred place…Listen to the silence. It can bring you….peace.” Walk to the ancient burial mound. Enjoy serenity in the woods. But be very careful about the property line, and not crossing it. The neighbors? They’re “vehemently” protective of it.

Alice gets it. “None of the reviews mentioned the creep factor about” the lodge. Vera, a college professor and “expert” on Native customs, is more respectful. But she’s the one who injures herself as they, of course, cross that property line.

And that’s when the trouble really begins. A kid with a freshly-killed cat warns them away, and his dad (writer-director Miles Doleac) may be seem more forgiving, but we know better. We’ve seen and heard from Sandy, the caretaker (Ritchie Montgomery).

“I have smoked marijuana…enJOYED it…I’m a, what they call it? Progressive!”

Still, it takes AN HOUR before the dudes in the scarlet robes and deer antlers show up and all this hooey about “blood sacrifice” pushes the romantic problems of Vera and Alice out of the picture. Sure, the photographer Alice slept with (Jeremy Sande) has shown up and is vile, in a makes-your-skin-crawl way. But they’ve got REAL problems, now.

A prologue tells us how long this local “dragon” cult has held sway, since at least 1889. There’s a hint of the Klan about this crowd, from their costumes and Latin (ish) incantations and intolerance of homosexuality. The group isn’t exactly integrated, either.

There are hints of horror picture elements that might have worked, here. But every scene is hobbled by inane dialogue delivered by the stiffest cast this side of the cemetery.

It’s hard to get a laugh out of even the most exaggerated Southernisms, delivered at a funereal pace.

Writer-director Doleac pads what could have been a streamlined plot with flashbacks to Alice’s cheating (nude modeling with the photographer) to goose up the titillation factor. He even throws in a bare-bottom caning.

Doleac makes a good villain, Montgomery a potentially fun elderly “explainer,” but he talks so slowly the jokes don’t land. The leading ladies flirt with competence, here and there, and the third actress topping the cast is just dreadful.

A good director can cover up a lot of performance sins, but Doleac’s shoot/editing lets every take go on too long, spotlighting the acting ineptitude, sucking the energy out of performances. He’s apparently never heard that classic stage direction, “Again, but FASTER.”

Still he got his nude scenes in, and a bare-bottomed “caning.” So there’s that.

Credits: Written and directed by Miles Doleac. An UnCork’d release.