Posted on November 21, 2018 by rogerinorlando 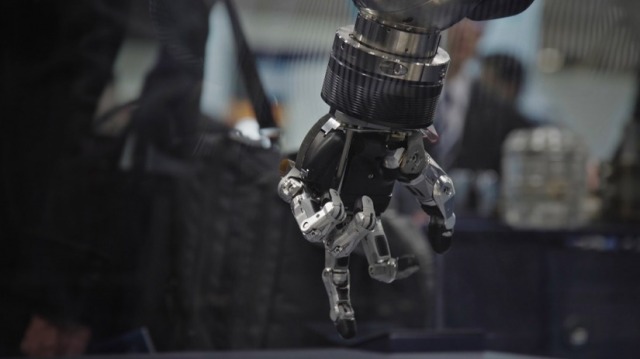 The future we feared is already here in Maxim Pozdorovkin‘s “The Truth About Killer Robots,” an HBO documentary that could have been labeled “science fiction” just a couple of years ago.

The director of “Our New President” and “Pussy Riot: A Punk Prayer” serves up a dry and chilling film of the present, about the robots already killing us and the “efficiency” capitalism that is ensuring that machines displace us.

Death by robot is not just for “Terminator” movies.

Pozdorovkin takes us to Baunatal, Germany, where in 2015 an assembly line robot accidentally killed a 21 year old worker who has not been identified to the public to this day.

We meet Joshua Brown via videos he recorded of himself, letting his self-driving (autonomous) Tesla chauffeur him around, and visit Williston, Florida — where his Tesla drove him under a semi and killed him in 2016.

And Pozdorovkin ventures to China and Japan, and back to the U.S. to show us the factories, trade shows, highways and pizza parlors where robots are taking jobs formerly done by humans, letting us meet the labor force — assembly line workers, promotional hostesses and truck drivers — being replaced by machines.

He breaks his film into chapters — I: Manufacturing, II: Service Sector and III Final Displacement. Using archival interviews of the late futurist and science fiction writer Isaac Asimov, he revisits Asimov’s Laws of Robotics (“A robot may not injure a human being…”), shows how they still drive the idea of “robotic ethics” today, and suggests that maybe they’re being ignored by those inserting these gadgets into our lives.

A clever touch — providing the film with an on camera android narrator who comments on our tech (cell phone, etc.) obsession and notes “You gave us your undivided attention,” and declares, in the PAST tense mind you, that “your advantage in precision was…temporary.”

That last bit comes from the infamous Foxconn cell phone assembly plant in China, which is leading the way in capitalism’s heedless race to first draw its workforce into cities, then displace that work force — by the millions — with machines.

Zume Pizza is a start-up that has machines mastering the art of making and cooking a pizza headed towards that blessed day when “Get the door, it’s Domino’s” has you taking delivery from a machine, too.

Academics and ethicists such as Carnegie Mellon’s Illah Nourbakhsh warn of a world where “every taxi driver in America” is unemployed — overnight (Uber’s self-driving car goal). A law student tests the boundaries of how much of that profession, from analyzing documents to composing briefs, building arguments etc., can be done by machine.

Pozdorovkin hints at Western prejudice when he has Japanese (Hiroshi Ishiguro) and Chinese scientists and entrepreneurs pooh-pooh concerns about this changing relationship with machines and interaction with them. We don’t need our memories jogged about what part of the world invented sex dolls.

But “Killer Robots” sets up the debates of tomorrow we have to start having today, the “basic income” idea some propose as a means of dealing with entire classes of the workforce suddenly rendered obsolete by machines.

It impresses upon the viewer the urgency of revisiting Asimov’s Laws of Robotics, with the machine driven “ethics” of deciding who lives and who dies in an unavoidable crash already upon us.

Documentaries can be entertaining and advocational at the same time, and while “The Truth About Killer Robots” (premiering Nov, 26) is more the latter — laying out a scary situation, documenting the ways it is a threat, sounding the alarm without pitching a solution — it draws you in and makes its case for being a movie you need to see, even if it scares you.