Movie Review: Misery is Musical in “Song of Back and Neck” 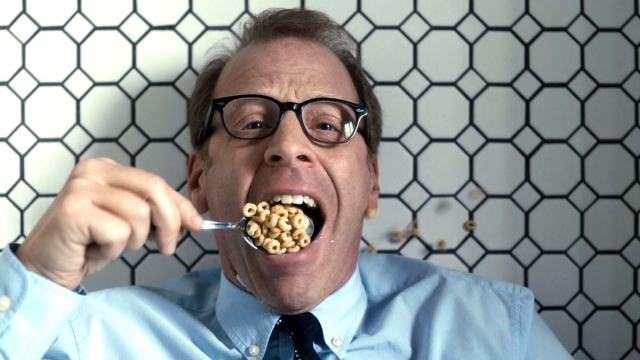 OK, quick show of hands — Who has back trouble? Those who CAN raise their hands? C’mon, let’s see’em.

Give it time, smart aleck kids. Your day will come.

Paul Lieberstein, a veteran of “The Office” both in front of and behind the camera (he was a writer on the sitcom), wrote, directed and stars in “Song of Back and Neck,” a sciatica comedy with an “Office” vibe about it.

It’s daft and cringe-worthy like “The Office,” with offbeat comical rhythms bouncing through the dialogue. But it’s also magical and ethereal, while being just as relatable as that landmark show in the Must Squirm TV comedy genre.

We meet Fred Trolleycar (How’s that for a made up name?) in silent agony. He drags himself out of bed, into the shower, to the closet to get dressed and into the kitchen to eat his generic Cheerios to start his day.

Literally “drags.” As in “My Left Foot” played for laughs. His aching spine won’t let him get off the floor for the first several minutes that start every day.

Fred (Lieberstein) visits “the top orthopedist in the state” (played by “Bridesmaids” director and “Ghostbusters” remake writer Paul Feig) who is entirely too flippant for comfort.

Fred has sciatica, a herniated disc and a pinched nerve in his neck  “the trifecta of back and neck problems.” He asks about options and hears, “I can’t help you. No one can. These things sort themselves out…from time to time.”

He gets talked out of three surgeries over ten years.

“I can’t put you on an endless stream of narcotics,” Dr. Make You Feel Worse adds.

The patient brings up acupuncture and the doctor chortles. “I could get some leeches and bleed you out.”

Fred shows up stooped-over at the office where he works, a 50ish paralegal at the law firm his father co-founded, dragged into meetings by the punk new lawyer on the block (Clark Duke, of course) “to make us look bigger than we are.”

That’s where he meets Regan, played by Rosemarie DeWitt. She’s ready to divorce her “made us rich” but never at home husband. And whatever the scheming senior partner (Sam Anderson) and insufferable Young Turk (Duke) say, it’s Fred who is on her wavelength. He’s interested in her story of love lost, and gets why she pretty much intentionally spills a coffee cup she’s accidentally over-filled, and why she’s pretending that didn’t happen.

When she hears about his pain, she punches her acupuncturist’s digits into his phone. He makes the appointment in the middle of their legal consultation. Fred is “on the spectrum” that way. And that’s when “Song of Back and Neck,” which is funny right out of the gate, really takes flight.

Dr. Kuhang (Raymond Ma) speaks no English but his face says volumes. The  untranslated Chinese puzzlement he mutters to his assistant/translator/daughter (Alice Wen) doesn’t need translation. The look of “WTF?” is universal.

When he sticks pins in Fred’s back, the pins start to vibrate and resonate, a ringing that the “doctor” (Fred uses “air quotes” to call him that) and his daughter hear, but Fred dismisses.  At first.

But Dr. Kuhang, a “third generation” acupuncturist, shakes his head at his daughter, brings in his father, who has never heard the like. He goes on Skype to consult with
the Wisdom of the East — experts in the Old Country.

Lieberstein, an alumnus of a TV show that had many running gags, crafts a beauty with this. Whatever else happens in “Song of Back and Neck” — the personal journey of the hero, the romance, the Moments of Reckoning — this escalating Chinese cultural reaction to the musical ringing emanating from the pins in Fred’s aching back is laugh out loud funny every time it is revisited.

I won’t give the stages in this rising comic crescendo away, except to say there’s “music” here, and no Chinese healer, bystander or chat show host we meet wants to waste that. No musician, either.

Lieberstein has a great eye for the romantic beauty of LA, which he captures as Fred recovers, via musical acupuncture sessions. Fred bounces up off the table, puts on roller blades and skates over to thank the woman who saved him.

And quirky as they both are, they click. DeWitt is at her most vulnerable and winsome. Liebertstein’s Fred is befuddled, bemused, wincing and depressed, with just a hint of charm about him. We can’t so much see a love connection here as feel it.

Their easy rapport is most obvious as they bond, reading passages of “Healing Back Pain” to each other — and laughing.

His office is, of course, the source of much of Fred’s angst — a life that eschewed law school, the oldest paralegal on staff and the only male in that “pool.” He is bullied and being the son of a partner, has a clueless bravado in the face of that bullying. Job for life, right? Or not.

He riffs on how “valid” people think “being in touch with their anger is” in this day and age, not caring that they’re making everybody else miserable by giving vent to “their” feelings.

Regan wistfully recalls her husband courting her, realizing too late she was “turning myself into a trophy.” Little pieces of LA reality get at the loneliness of the place. Regan tries to make a movie date with her pal, her personal yoga instructor. Nobody you pay is a “pal” in the lonely City of Angels.

Lieberstein writes with an “Office” vibe — moments of awkwardness, veiled insults, unveiled contempt delivered via a perceived pecking order that is more delusional than real, or merit-based.

Mop-topped Duke takes one more dip in the entitled frat-boy/prick pool, and we hate him the way we always do in this guise (he was a Young Turk on “The Office,” too).

DeWitt, who first gained fame on “Mad Men,” “United States of Tara” and “The Last Tycoon,” reminds us what loneliness with a very pretty face looks like.

And every so often, Fred has a session on the table, with pins in his back and the curiosity of folk medicine authorities, TV hosts and musicians of the East, all pondering what it all means, and what can be done with the haunting melody singing from the pins in his aching back.

The romantic comedy elements here are just offbeat enough to appeal. But with every encounter with the needles, the music and the “Song of Back and Neck,” the pitch rises and the laughs — awkward and endlessly surprising — turn to cackles and then guffaws.

All of which has to be music to any comedy writer’s ears.

Credits: Written and directed by Paul Lieberstein. An Orchard release.