Movie Review: Is “Suspiria” worth the bother? 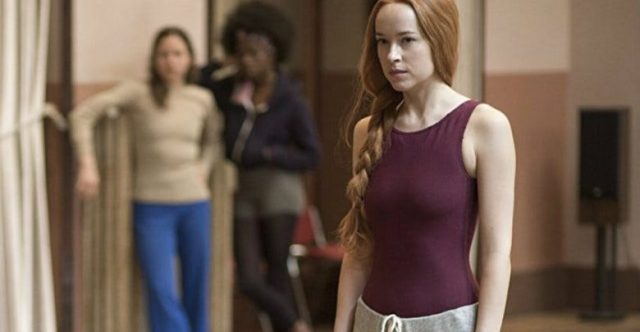 The safest way to review the new “Suspiria” is to remember the old “Suspiria” (1977) and bow out with an “It’s not really my thing.”

Cryptic, creepy, sexually asexual, gory and grotesque, it’s Reason One to back away — carefully, with an eye towards an exit — any time you’re cornered into a conversation with a Dario Argento cultist. The first film and the entire canon of Argento was and is most disturbing in the sorts of lost souls slavishly drawn to it and him.

The second tack to take is acknowledging that in poker, we call it a “tell.” In coal mines, it’s canaries who give away the game. And in movies, the presence of Dakota Johnson is the surest sign you’re in for something that grates and fails, a tease that renders the sexy off-putting, the potentially compelling dull. She’s uncanny for her knack of turning up in bad movies, made worse (usually) by her presence.

Luca Guadagnino (“Call Me By Your Name,” “I Am Love”) gives us a challenging puzzle  of an indulgence that rattles on and on, like a hearse with blown shocks, well past its point of resolution. Those inclined to treat everything he does as The Italian Cinematic Renaissance will give him the benefit of the doubt — stunt casting, insert shots of eyes-averting gore interrupting the underlit perpetual gloom of Berlin in mid-Cold War.

It’s always raining in horror movies with this much pretense.

I cut no such slack. He’s always needed editing, never more so than in this time-suck.

“Suspiria’s” “Six Acts and an Epilogue” structure begins with an opening act that is more a prologue. Chloe Grace Moretz plays a manic/panicked dancer whose Jungian psychotherapist, Dr, Klemperer, lets her show up unannounced and bounce off his walls —  sharing her mid-freak-out journal, her dreams and her fears that this Markos Dance Company she’s joined in Berlin is killing her and others who come into their clutches.

“There are WITCHES,” she insists, giving the game away in the opening ten minutes. “They’ve been underground since The War!” It’s 1977, and Germany’s Awfulest Generation hasn’t died out yet. There were witches in their ranks.

Patricia leaves the scene. Enter Susie Bannion (Johnson), a naive devotee of Viva Blanc, the genius behind the all-female company. She has no references, but her writhing, arhythmic dance — contortions, leaps and crawls — sells Blanc (Guadagnino muse Tilda Swinton) on her. She will replace Patricia in the company. And then Olga.

No, let’s not talk about “what happened” to them — terrorism, hijackings, bombings and kidnappings are all over the TV. Let’s assume it had something to do with that.

But as Susie half-innocently immerses herself in the womynist culture of the cultish company and Dr. Klemperer tries to get the police interested in what his missing patient said about the corps, the Ohio girl finds herself drawn into intrigues and wrestled to the floor by unseen, gnarled hands reaching up from “below.”

As the choreographer, assistants and matrons of the Markos cackle in their “Last Supper” staged meals that play like an infamous cooking scene in “Macbeth,” as cops are seen helplessly nude and humiliated, under a spell cast by the witchy women, Susie loses herself in the collaboration and the art which — as we’ve seen “The Red Shoes” and “Black Swan” — is what dancers do; lose control of their destinies and lives to The Dance. 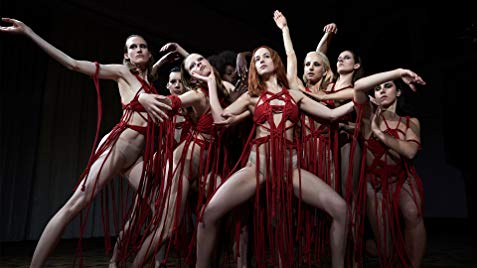 I loved the chilling decay of the production design, calling to mind the great German cinema of the ’70s. The nightmarish fashions aren’t hurt by flashbacks of Susie’s Amish childhood — a brutally repressive farm life where she could only dream of travel and dance. The ’70s Amish here, with their tractors and what not, are more Mennonite, no matter what Susie says to Madame Blanc and her harem of harridans.

The Dance itself is striking, powerful. The rituals of “The Company” are even more fascinating with thi film’s “toil and trouble” subtext. Blanc kisses each dancer in greeting at every rehearsal, her directions to them are vague and yet specific enough.

But as Susie takes over “The Protagonist role” in “Volk,” the show the ensemble is reviving, noting that she memorized it by watching film footage (pre Youtube and pre-VCR) of it “over 100 times,” and the dancer she’s replacing in the role is seen shoved into an empty rehearsal studio where unseen forces drag, hurl, yank and tear her until she’s a bag of broken bones and meat, all carried out in time to Susie’s movements in rehearsal down the hall, as blood spurts and is spat out, as designer meat hooks drag the body away, the viewer is faced with a stark choice.

Stick with this and try to rationalize whatever “Suspiria” is saying about art and dance and witchcraft and feminism to justify two and a half hours of unerotic, opaque ickiness and puzzles we’ve worked out (Don’t look at Dr. Klemperer, listen to the voice).

Or do we join those who decide “This just isn’t worth the trouble?” Because it’s possible to “get it” and enjoy the (brief) challenges of Guadagnino’s vision and wish somebody would challenge him in the scripting, shooting and editing stages, to get to the damned point, and once he’s made it, move on.

Credits:Directed by Luca Guadagnino, script by David Kajganich, based on the Dario Argento film’s characters. An Amazon Studios release.