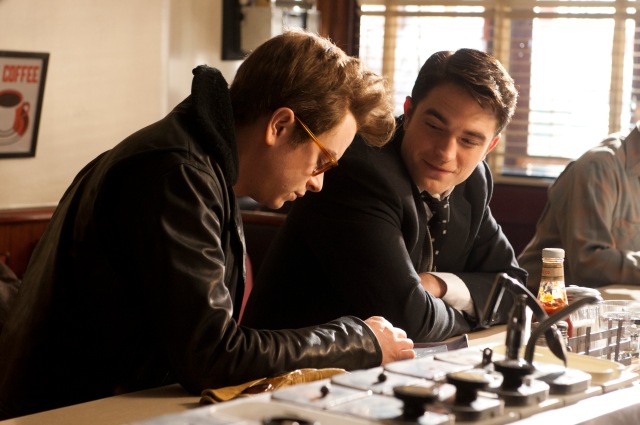 Some people have an eye for it, a grasp of someone so different the zeitgeist changes overnight, that quality that makes a star. And those folks don’t all work for movie studios, publishers, TV networks or record companies.

“Life” makes for an unusual take on the stardom of James Dean. His arrival on the scene just as youth culture, The Beats, rock’n roll and “The Method” were about to roll over America like a just-started-shaving tsunami, might have been foretold by Brando, who preceded him, or Elvis, who blew up at the same time.

But this brooding, proto-“Beat” punk “artist” “discovered” by the last great days of “the studio system” was no sure thing.

Until he met the photographer who carved his image in ice — iconic still photographs that captured his insolence, his disaffected youth, his uncompromising cool.

Robert Pattinson is Dennis Stock, that photographer. We meet him at a 1955 Hollywood party, just another ambitious shutterbug dreaming of fame, gallery shows and respect, because “nobody respects photographers in Hollywood.”

Nicholas Ray (Peter Lucas) is showing off Natalie Wood (Lauren Gallagher), a child star about to transition to adult roles in Ray’s “Rebel Without a Cause.” The director still hasn’t found his leading man, though. Even though he’s sitting at the bar at the party, bored.

That would be young Mr. Dean, gawky, bespectacled, just wrapped on “East of Eden.” Dane DeHaan, long-hyped as another “next James Dean,” and widely ridiculed for it, with bombs from “Valerian” to “Tulip Fever” to “Knight of Cups,” to his credit, takes on Dean.

Pattinson is spot-on as a striver, an ambitious divorced husband and negligentm workaholic dad who recognizes, after the semi-flirtatious and always casual Dean invites him to a preview of “Eden,” that this guy is the Next Big Thing.

Stock can’t sell his “photo essay” pitch, maybe for “Life Magazine,” to his agent/editor (Joel Edgerton). But he will.

“There’s an awkwardness” he can’t quite articulate. The kid is “very pure,” and “Something’s changing, Jimmy’s a part of that.”

DeHaan? I’m going out on a limb here and saying he grows on you. With his friendly, laid back Indiana drawl, he comes off as vaguely flirtatious (to both sexes), sleepy, with a kind of high, soft voice — annoying, inventive, insistently passive and intent on Devil may care cool — kind of like Dean himself. DeHaan took a bit of a pounding when “Life” came out, and frankly, it’s undeserved.

The picture may meander even as director Anton Corbijn (“The American,” “A Most Wanted Man”) plunges into not just recreating an era, but over-indulging in the complex, teasing, begging relationship between the about-to-be star and the needy photojournalist condemned to shoot press conferences, parties and studio-sanctioned still images as a set photographer.

“Wow, they let you on the set? You must be well-behaved!”

But I think DeHaan is a good-enough Dean, as good a Dean as Dean himself deserves, a bongo-playing hipster, affecting while pretending not to use affectations, unguarded enough to insult the producer of “Eden” when the press asks him if he’d have jumped at the chance to make “The Boy From Oklahoma,” a Jack Warner bomb starring Will Rogers Jr.

“Didya SEE it?” he boyish giggles to the reporter who asks the stupid question.

Corbijn leads us through this world, letting us meet the stars ( Eartha Kitt, Julie Harris, Raymond Massey, Natalie Wood) of the age, including the Italian bombshell Pier Angeli (Alessandra Mastronardi) who was involved with Dean at the time.

“Who do you think will be beeeeger?” she demands of Stock, “Jeemy or Poll (Paul Newman, with whom she co-starred in a couple of films)?”

The minx. It wouldn’t matter. She was still going to marry Vic Damone.

The dazzling impersonation here is Ben Kingsley, playing the powerful and grudge-carrying Warner brother, Jack Warner, one of the Last Titans of Old Hollywood.

“You’re an intelligent boy, right? Follow certain rules…I’m not sure we should emphasize the rebel in you, Jimmy.” And then the naked, brutish threat — “Do you want to be working back at the CBS parking garage?”

Corbijn and the script string out the “courtship” between photographer and future star. “I’m going to make you a star!” Dean is evasive, “Do I like the sound of that?” He isn’t sure he wants that, or that he wants “to rush it. ”

There’s no guile to this James Dean, which may be inaccurate. But this “friendship” seems damned one-sided. And Stock’s editor is more blunt.

“You’re chasing a nobody who likes to be chased.”

Then, a rainy day on Times Square, he’s hungover. The “talent” is late and the photographer has lost all his confidence. And hell, let’s just get this over with.

If “Life” has a point, it’s about images and how they are crafted — by the artist on either side of the camera. Dean, for his feigned disaffection, “performed” for Stock. And Stock might have pictured “a sunny day,” but sunny days are never as arresting as the dull grey hues of a rainy, chilly late winter day in Manhattan. He lucked into an iconic image.

Pattinson may not be the best actor to convey naked, craving desire (for fame), but he’s pretty good at matching what Stock must have done when confronted by Dean — caring without letting on he cares. And the “Twilight” star absolutely nails Stock’s first-ever experience of “uppers” — chattering complaints and hopes and disappointments without taking a breath.

DeHaan has snatches of Dean the way he was, and the way we remember him, which aren’t always in sync. Put the glasses on him and he’s “the artist,” deep, sensitive, visiting home in Indiana or his “happiest place” The Actor’s Studio. Take the glasses off and he’s a Hollywood star, whether he welcomes that or not.

The biggest problem with “Life” might be how long it goes on past its climax, trips to Indiana, the “East of Eden” premiere, soul-searching and tears for the life Dean (and to some extent Stock) will leave behind.

But if you’re a Hollywood history junky like me, you won’t mind this excess, or the film that Corbjin, with each artful visual composition (filmmakers do that in movies about artists) builds around this little known relationship and the seminal moment in culture that it produced.

MPAA Rating:R for some sexuality/nudity and language