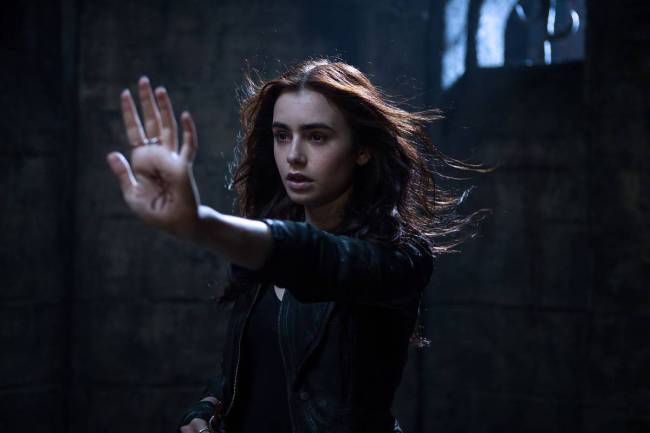 There is most certainly an audience for the film of “The Mortal Instruments: City of Bones,” fans of the six (planned) novels about demons, supernatural demon fighters, vampires, werewolves, witches and warlocks.
They’ll thrill to all the endless litany of runes, talismans, history and “rules” of this world of shadowhunters descended from an angel that showed up to help crusading knights a thousand years ago. They’ll eagerly await the brief, throw-away visit to the “City of Bones” (a cemetery) of the title.
And if you love exposition and shapely if bland young actors in leather, skinny jeans, knee boots, Goth cocktail dresses and heavy eye makeup, this may be the movie for you.
Lily Collins is Clary, the birthday girl whose mother (Lena Headey of “300”) never told her about her heritage, why she keeps seeing signs and people with great hair stalking and stabbing demons in night clubs and what not. Clary, dragging her unsuspecting admirer Simon (Robert Sheehan) along, finds out.
She was born into this world. Simon? He’s just a “muggle.” Sorry, “mundane,” a clueless human.
They learn all this from the mop-topped warrior-explainer Jace (Jamie Campbell Bower), who drives a Triumph motorcycle, flirts with Clary and has the tedious job of explicating every single thing to them and to the audience.
“All religions assist us in our battle,” he says as they rummage through the demon-killing gear stashed beneath a New York church altar.
“Magnus Bane. He’s a warlock. I should’ve known,” he mutters. Of course.
The shadowhunters fight “a war that can never be won, but must always be fought” the leader of their “Institute” (Jared Harris) teaches. We’re invited to draw our own parallels to modern battles against terrorism.
Sometimes, vampires interfere. Sometimes, werewolves help. Johann Sebastian Bach’s contrapuntal compositions play a part. Homoerotic come-ons play into the love triangles set up here.
A magical cup, a “mortal instrument,” is sought by good guys and bad (Jonathan Rhys Meyers).
Cool effects? “The Portal” is a watery door to points in space and time, and the runes — tattooed over the arms and chests of theshadowhunters, glow when they’re doing their runish thing.
It’s a stilted, silly mishmash of earlier fantasy  franchises, with the occasional decent joke and frequent brawls involving swordplay andbackflips.
Director Harald Zwart has “Agent Cody Banks” and the recent “Karate Kid” among his credits. Which tells you the best they’re hoping for here is a “Percy Jackson” level of success. This franchise’s fate was sealed when bargain hunters Screen Gems got the distribution rights to it.
And there’s no stopping them. “City of Ashes”, a second adaptation, is due out next year, probably dumped in late August, just like this one.

35 Responses to Movie Review: “The Mortal Instruments: City of Bones”