Movie Review: “In a World…”

Posted on August 4, 2013 by rogerinorlando 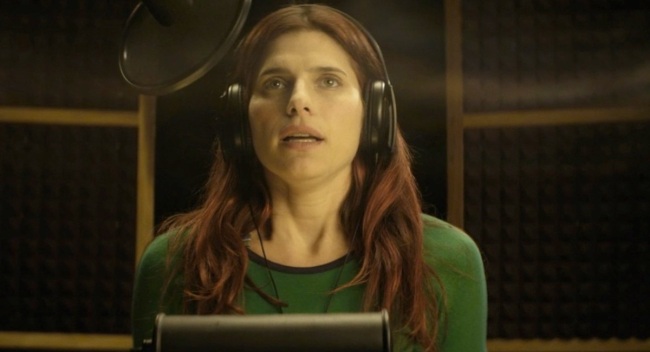 You don’t have to go to the movies to know the phrase “In a world…” It’s the voice-of-doom cliche from a hundred movie trailers, from thrillers — “In a world ruled by zombies” — to comedies — “In a world where even zombies need love…”
The most famous purveyor of that was Hollywood voice-over artist Don LaFontaine, who died in 2008. “In a World…” is an indie comedy set in that closed-club of golden voiced professionals, men and a lone woman jockeying to be the one who gets to “own” that phrase and rule that little corner of the movie biz.
Actress turned writer-director Lake Bell (“No Strings Attached,” “What Happens in Vegas”) may be condemned to best friend roles in mainstream films. But she takes charge here with an amusing, simple get in, make-your funny point, get out comedy about the cinema’s ultimate specialists.
That’s not what Carol (Bell) is. She does voice work, but her specialty is voice coaching. She gets the call when Eva Longoria (as herself) slings a “retarded pirate” accent for her latest role and the sound engineer Louis (Demetri Martin) needs Longoria to re-record her lines. After he’s apologized, profusely, for using “retarded” as an insult.
Carol’s dad is the real Man with the Golden Pipes. Sam (Fred Melamed of “A Serious Man”, very funny) is the Elder Voiceman everybody figures will be the one to take over “In a World…”, given to pronouncements like “A voice is not just a blessing, it’s a choice.” He’s propped daughter Carol up for years but he’s thwarted her greatest ambition — to be the Queen of Movie Trailer Voice-Overs.
“The industry does not crave a female sound.”
Sam and the smarmy and rich Gustav (Ken Marino) figure they’re the ones with the inside track on “In a World…” But Carol, by accident and by looks (sound engineer Louis is smitten) stumbles into the lead in that race, upsetting this silly world of accents, affectations, rumbling basses and self-important nobodies. She might well be the voice of “The Amazon Games,” a four film trilogy that could be Hollywood’s next you-know-what.
Bell tosses in Carol’s need to record random voices and accents “for my archives,” which leads her hotel concierge sister (Michaela Watkins) away from her husband (Rob Corddry), who is also in the biz.
But mostly this is about Carol’s low self-esteem. When you’re this good looking and all you want out of life is to be “The voice of Sunny DeLight”), you’re living the lives most of us lead — just trying to build status within our own myopic little universes. Bell gets this across with great sympathy and charm.
And she gives the best lines to Melamed, her pompous dad — “Women. They’re flying planes. They’re taking jobs!”
It’s more a collection of knowing chuckles than a laugh riot, but in world where the voice and who gets to be the voice is all that matters, “In a World…” manages to amuse and so alter the way we listen to movie trailers that we’ll never hear “In a World…” again with a straight face.