Kristen Wiig fights the expectations game with “Girl Most Likely” 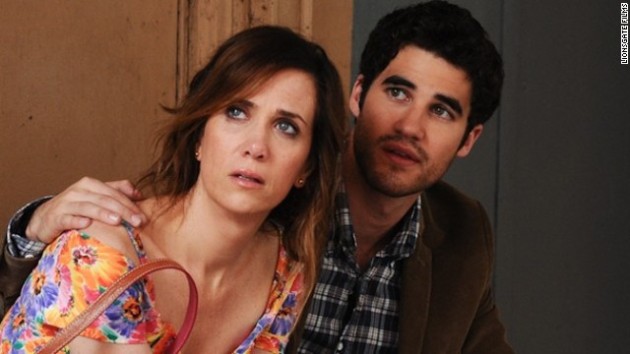 Kristen Wiig has worked steadily since her break-out success in “Bridesmaids”, doing basically what she’s always done — quirky supporting parts in comedies, cameos on TV and as a voice in cartoons, killer walk-ons appearances on awards shows.
But that doesn’t quite camouflage what her new film, “Girl Most Likely”, represents. The film, now going into limited release, is her first starring role after having written and starred in a blockbuster.
“Maybe people have expectations for what I do after ‘Bridesmaids,'” she says. “I don’t take on that burden, because I don’t think that way. I can’t focus over what other people think.”
“Expectations”, after all, are the trap her character in “Girl Most Likely” falls into. Michelle Morgan’s script is about a 30something New Jersey native who had great expectations in her youth. An award-winning teen playwright, she took her shot at New York, got a job at a magazine and a collection of high class friends. But as you’d expect in a comedy, things are not what they seem. The job is drudgery, her romantic relationship isn’t working out and she’s one failed fake suicide attempt from being shipped back to New Jersey, to the life she abandoned and mother (Annette Bening) she escaped.
“Imogene’s at that age when it seems like everyone around her has their stuff together, and she doesn’t. Imogene feels a little lost. She’s not sure what she’s supposed to do to get THERE. I think a lot of us can relate to that, that idea that we’re not there and we’re not getting there.”
The film (reviewed here), co-directed by the team that did “American Splendor,” touches on the subject of people who peak too early in life, who leave home for “The Big City” and fail. Imogene must go home, take stock, deal with her mother and what might have been.
“A lot of people who leave their hometown and move somewhere else see where they came from as ‘My old life,’ the one they want to forget about,” says Wiig, who grew up in Rochester, New York. “What I loved about this script was that she has an opportunity — OK, she’s FORCED — to go back to this place she thinks she hated and figure out what she loved about it, growing up.”
Wiig admits that she chooses her roles based on how “very specific, sometimes very odd” her character is. When her friends at Funny or Die pitched her an episode of “Drunk History” that had her impersonating 1970s kidnapped heiress Patty Hearst, “that’s all they had to say. ‘Patty Hearst,’ ‘drunk history.” Comedian Natasha Legerro read up on the Hearst case, got smashed and narrates the story, drunk, as Wiig, as Patty, acts it out.
She starts work on a “drama with comedic undertones, “Welcome to Me,” in August. And there’s a straight drama, “The Skeleton Twins,” that co-stars Wiig’s former “Saturday Night Live” cast mate Bill Hader, already in the can. They play twins who reunite and re-assess their lives after near-death experiences.
“I think people are going to be surprised at me in this,” says Hader. “I KNOW Kristen’s going to surprise them.”
Which is all any actor can ask for — the chance to surprise. As Wiig makes that turn past her 40th birthday (Aug. 22), she finally gets to do what a lot of her comic performances hinted she’d be good at — drama. Her funniest creations have a wistful air of sadness, even tragedy, about them.
“I kind of fell into comedy,” she says. “And stayed here. Maybe now, I’ll have the opportunity to do both.”
It’s tough to get her take on how her “life changed” after “Bridesmaids,” which earned $170 million at the U.S. box office in 2011.
“I never know how to answer that. I have nothing to compare it to. I don’t know how to talk about myself, geeeeez!”
Maybe that connects with the whole “expectations” game. “Girl Most Likely” isn’t winning the warmest notices from critics, with Slant Magazine opining that it might have been “just a paycheck for the otherwise enormously talented Kristen Wiig.”
The actress shrugs that stuff off. She’s still on the lookout for that next “dark, and odd” character and that next indie film.
“After you’re in a movie that’s had some success that people pay too much attention to what you do next. If you worry about that, you’ll never do anything.”