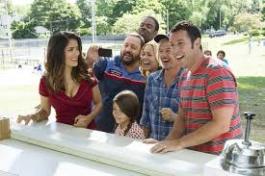 The gang’s all here for “Grown Ups 2,” Adam Sandler’s latest lowbrow make-work project for all the ex-jocks, jockcasters, “Saturday Night Live” has-beens and other hangers-on he keeps on payroll.
It’s another pointless romp through Sandlerland — where the women are buxom, the kids have catch-phrases and the jokes are below average.
Basically, the sequel to the hit “Grown Ups” finds our Hollywood pal Lenny Fader (Sandler), his wife (Salma Hayek) and brood moved back to his home town. That’s where childhood pal Eric (Kevin James) runs a body shop, Kurt (Chris Rock) is a cable guy, and Marcus (David Spade) has just learned he’s a deadbeat dad.
Apparently, Rob Schneider was busy to do the sequel, probably as much a shock to him as to us.
We follow these clowns through a long day — the last day of school for their kids — as they reminisce at Kmart (where Tim Meadows ended up), feud with frat boys (Taylor Lautner is their martial arts mad leader) at the quarry that’s the town swimmin’ hole and find other ways to not quite grow up by throwing an ’80s themed party that night.
The big message here — bullying, and how “you can’t back down from a bully.”
The jokes? Broad variations of “the dozens”, guys giving each other the business in elaborate, limp insults. Spade is “Betty White” because he’s old and his hair’s a wreck, Rock’s Kurt is “Skinny Danny Glover,” James is “Crocodile DumBEE,” and Nick Swardson does his human punching bag shtick.
Farts, belches, poop and pee gags, guys leering at cheerleaders, women leering at male cheerleaders (Sandler protege Andy Samberg among them) all have their place.
As does every comic, from ancient Norm Crosby to creaking Colin Quinn, as an ice cream vendor who gives a nice speech justifying Sandler’s entire farts-over-art career. He got rich doing this, Quinn rants. So there.
It’s dated, it aims low and Sandler is, as always, self-aware enough to get that he’s pandering.
“Look at me. Look at your mother (Hayek). That makes NO sense, only in a Hollywood movie.”
At least the guy’s out there, stimulating his little corner of the economy. Sandler is one businessman who takes the president’s edict about make-work projects to heart. As deep as it gets in “Grown Ups 2,” you know the fellow loves his movies to be “shovel ready.”