Posted on June 7, 2013 by rogerinorlando 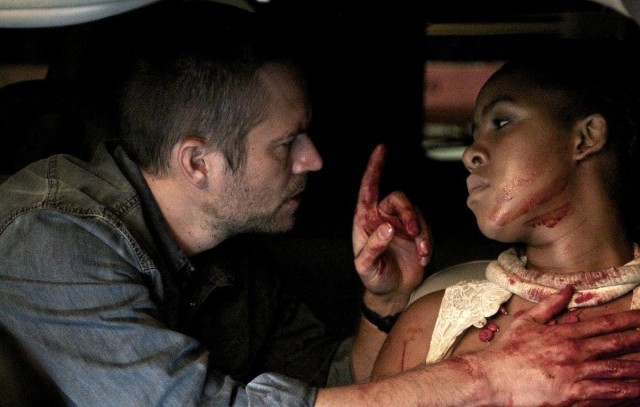 The essence of a great car chase is editing, that combination of shots — points of view, inside and outside the car — that make the viewer share the sense of speed, danger and G-forces that the drivers must feel.
“Vehicle 19” is a thriller set almost entirely inside a car that is intermittently chased, shot at, wrecked and repainted, all in real time and all in South Africa. It stars Paul “Fast & Furious” Walker, who knows a thing about driving and looking anxious behind the wheel. So writer-director Mukunda Michael Dewil keeps his camera on his most valuable asset, his star — Walker. The chases, wrecks and re-paint aren’t shown in subjective shots that would have made this thriller thrilling, or even shown the car.
Maybe that’s because of the rental car Michael Woods (Walker) is driving. He stands out down there because he is, as one streetwise fellow points out, “an Ameri-CAN in a mini VAN.” A chase movie with a mini van at the heart of it? That’s novel. It’s a pity Dewil doesn’t show it.
The rental is not what Woods wanted from Hertz. He ordered a sedan. Never mind, he gripes. He’s in a hurry to meet his ex-wife after a long separation.
Then he sees the phone in the glove box with the text message “Keep it clean.” What, the rental car? No. It’s more sinister. There’s a gun with a silencer on it underneath his seat. The phone rings, a voice figures out that the wrong guy is in the mini van. But before Michael can switch cars with the voice that claims it’s needed for a “covert operation,” the bound and gagged woman tumbles out of the luggage compartment and into the movie.
“Vehicle 19” crams a lot of story and back story into its 85 minutes. There’s a reason Michael won’t go to the cops, a reason he’s in a mad rush to see his ex, a reason he’s willing to do what the voice tells him and be on his way.
But Rachel (Naima McLean) derails all that. She struggles and fights. And she talks, telling Michael a story that, if he believes it, puts them both in dire straits.
“This is my reality, and it’s become yours.”
“Vehicle 19” is a tour of urban and suburban Johannesburg — townships, back alleys, street life — shot in extreme close-ups of the handsome Walker. There are interesting story elements and locations. But the claustrophobia of the car works against it. Could they not afford a camera-carrying chase truck? Apparently not.
So we’re stuck with Mr. “Fast & Furious” straining to make a Mommy Mobile exciting to drive and more than a match for all the BMW cop cars he ditches over the course of 85 middling minutes.