There’s something utterly unnerving about seeing a child with an AK-47. He can be
Nigerian, Sudanese or Canadian, but the sense of innocence lost, of that “Lord of the Flies” cruel streak too many of us carry with us makes the image of a twelve-year-old looking down a barrel with pure malice just chilling.

“I Declare War,” co-directed by Jason Lapeyre and  Robert Wilson, is an allegory about kids’ playing war that works better as entertainment than as allegory. The toy guns that this group of Canadian boys (and one girl) make out of sticks, cans, what have you, transform into real weapons blazing away with live rounds in the action sequences of this elaborate kids’ game run amok. And when they do, combat movie cliches fall one after the other as the kids cross the line from fun-and-games to psychosis and torture.

P.K. (Gage Munroe) is the unbeatable leader of one combat team in this urban forest game of capture the flag. He has cunning, the loyalty of his half-dozen troops, and braces. For his teeth. He’s 12.

Kwon (Siam Yung), his best friend, is also his most loyal soldier. Smaller than the rest, he avoids bullying by playing along and sticking close to P.K.

Quinn (Aidan Gouveia) is the fair-haired leader of the opposition. He’s oblivious as to why a girl (Mackenzie Munro, a younger Emma Stone) would join his troop. But she’s got “techniques” and “skills”these boys don’t understand. Even though she’s still practicing using her feminine wiles, you know they kids will be putty in her hands.

Paint balloon become grenades and whittled sticks become machine guns in firefight as the two teams go on patrol, feel each other out and seek each other’s base.

There’s a religious pacifist kid, a couple of bullies, one more psychotic than the other, a mysterious, unspeaking “scout” who covers terrain with his faithful husky (This is Canada, after all), and ambitions, fears, prejudices and terrors that play out in the course of this epic battle.

Torturing prisoners? Sneaking non-combatants into the enemy camp? Selling out your best friend? It’ll all happen in this hellish “War,” a film a little too long and too broad to fully come off as a “This is what happens when you go into combat” allegory. The kids’ performances are uneven (They are children, after all) and the story takes a very long time to get where it’s going.

Still, it’s engrossing, violent, frightening and funny in the ways it captures the way kids speak with no adults around, and the way kids act when society’s rules take a back seat in time of war. 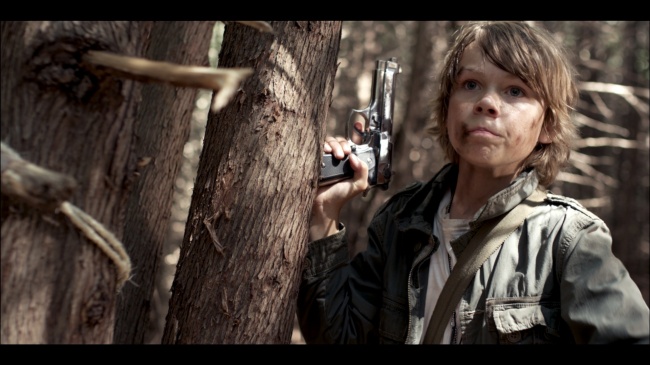