Movie Review: “The Company You Keep”

Posted on April 3, 2013 by rogerinorlando

Robert Redford delivers one last lecture on ’60s idealism and passes another baton to Shia LaBeouf in “The Company You Keep,” an engrossing thriller about the last anti-Vietnam War radicals still underground.
Redford, along with fellow Oscar winners Susan Sarandon, Chris Cooper and Julie Christie and the cream of the cinema’s current crop of character actors — Brendan Gleeson, Terrence Howard, Nick Nolte, Stanley Tucci and Richard Jenkins — make this “No Country for Old Radicals” a feast of performance, with many of those illustrious stars sharing scenes with LaBeouf, who plays an obsessed newspaper reporter on their trail.
And once again, “The Kid” holds his own.
Sarandon plays a former member of “The Struggle” who has laid low for decades, raising kids and carrying guilt. She wants to turn herself in for her part in a bank robbery that got a guard killed some “30 years ago.” But the FBI (Terrence Howard) catches her first.
LaBeouf is a hotshot reporter at a struggling Albany paper sent to do the followup story. And what he starts to uncover gets him on the front page, and puts another fugitive, a local civil liberties lawyer (Redford) on the lam, dragging his 11 year-old daughter with him.
As reporter Ben fends off his downsizing/budget cutting editor (Stanley Tucci) and follows the scent, others from that underground group — people still using “Hey, man,” and “Hang tight, brother” in their dotage — come up for air — Nolte (whose voice is pretty much shot), a profane and comically combative Jenkins, and the elusive idealist Mina, given a radiant flintiness by Julie Christie.
As the lawyer’s true identity comes out, as “people who know how to hide” prove it by eluding law enforcement members one-third their age, as Ben clings to his story “like a life raft,” the puzzle pieces fall together and characters have their say about who they were and what they did back then, and who they are now. Sarandon gets a lovely speech explaining ’60s radicalism in a single scene — “It wasn’t abstract. There was a (worldwide) revolution. I wanted to be a part of it.”
And Jenkins, whose “struggle” now takes place in academia, sums it all up.
“Now, we’re just a story told to children.
Redford aims barbs at the “dying press,” about “accuracy, agenda” and the like. And LaBeouf’s reporter breaks a few rules, slipping money to sources, lying to get his foot in doors.
The biggest problem with “The Company” is more obvious. It is mathematically inept. The vast majority of the events described and portrayed here happened in the late ’60s and early ’70s, during the war they were protesting. “Thirty years ago” would not fit in the last the latest of the trials of that era, nor would it accurately reflect the ages of the mostly-aged cast. Redford was 35 in 1971. Pretending he’s not 70+ is both vanity (His youthful-for-his-age character doesn’t feel the need to disguise his ginger hair while on the lam, either) and insulting. What, we can’t add?
But it’s harder to engineer the idealistic young cast (Anna Kendrick and Brit Marling join LaBeouf) into the story’s rabbit warren of blind and not-blind alleys if events fell 40 years ago, so let’s just hope people don’t notice.
That clumsiness doesn’t wreck it, but it does tend to undercut this nicely-cast and very well-acted “story told to children” about the ’60s. 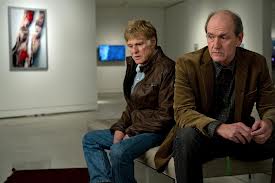