Movie Review: David Tennant’s hippy Scots shrink takes on the establishment in “Mad to be Normal” 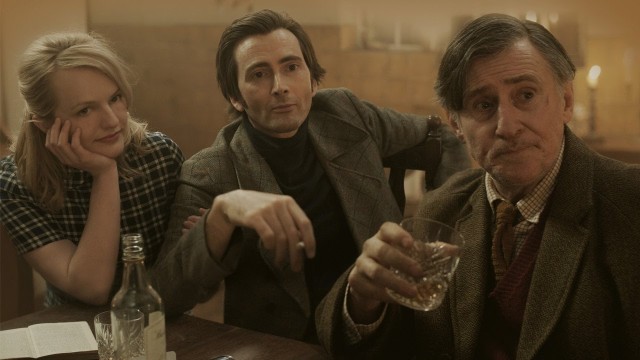 “Mad to be Normal” is an “Awakening” or “Patch Adams” Robin Williams never got around to. It’s another sympathetic big screen biography of a doctor with the audacity to listen to his patients and actually care about them.

But R.D. Laing was Scottish, something of a hippy and a scoundrel who ignored his children and wives for the sake of his indulged patients, and a controversial figure to this day. He’s played by David Tennant, whose version of gonzo free spirit is lot darker than Williams’ sentimental take on such characters.

That contributes to the general downer that this highly-fictionalized surface gloss, co-written and directed by Laing expert Robert Mullan, on his life and work turns out to be.

Laing started making waves in the early ’60s and Mullan’s film catches up with him at his peak — a celebrity, best selling author, “acid Marxist” to the LSD using musicians (The Grateful Dead were fans) and generation they came from.

That’s how Angie Wood (Elisabeth Moss) encounters him, at a crowded ego-tripping “lecture.” She’s just finished school and longs to learn at the feet of the master. Of course they end up in bed. It was the ’60s, after all. And yes, she’s a composite character, based on a wife and other women in Laing’s life.

Angie meets another enthusiast at the lecture, Jim (Gabriel Byrne). She mistakes him for a colleague of the good doctor, and he lets her. Damned if he isn’t a patient.

“The madness of our patients is a result of the destruction wreaked on them, by US,” the good doctor lectures. “Tranquilizers prohibit communication…ENGAGE.”

Laing’s radical idea, the one that was shaking up the psychological establishment? He was anti-tranquilizers, preferring to indulge and listen to his patients. He sought more tangible, physical causes for illnesses, described schizophrenia as “a theory” and all this made him a revolutionary in the last years of the “lock them up/drug them up/electroshock them” era in psychotherapy.

If that barbaric age ended, it is suggested, Laing helped bring about the change.

He was resolutely against “asylums” and mental hospitals, and the film focuses on his years running a sort of therapeutic halfway house, Kingsley Hall, in London in the late 1960s. His patients there are a blend of depressives and possibly dangerous characters, with Michael Gambon playing one of the former and the suited, well-spoken Jim (Byrne) quite possibly one of the latter.

The film is a somewhat flat survey of the tropes in such stories — a film crew following Dr. Laing as he tours America, visits a mental hospital and “reaches” a patient his peers have locked up in a padded cell.

His relationship with Angie turns testy when a child enters the picture. He’s already neglecting the kids from his last marriage, and now he neglects Angie, all for the sake of his Kingsley Hall patients/friends.

The performance is cocksure and monomaniacal and seems on the mark, seeing as how Laing, for all his eccentricities and indulgences (He prescribed LSD, because he used it himself.), is still regarded as influential today.

His communal “cure” efforts at Kingsley Hall were very much a mixed bag, and the end of this “experiment” depicted here is wholly fictional. But the sketchy veracity of “Mad to be Normal” isn’t what weighs it down. It’s Mullan’s (“This Weekend Will Change Your Life”) slow paced slog through conventions.

Limiting Moss to a “You have time for everyone but US” caricature is downright criminal.

The period mores, couture, decor and “out with the old” ethos is on the mark. And Tennant makes the man fascinating, if under and then over-explained (Let’s meet his mum, shall we?).

But like Laing’s ideas and experiments, “Mad to be Normal” turns out to be much the mixed bag, with just as much worth tossing out as there is to celebrate.