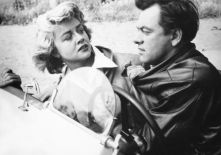 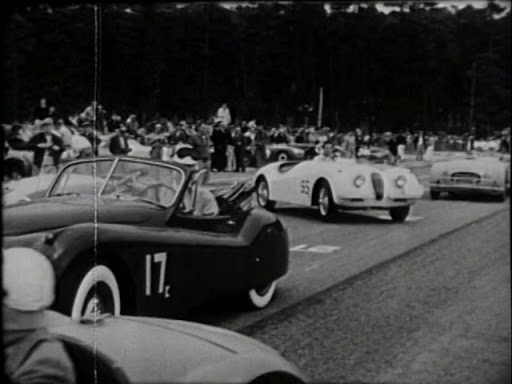 I hadn’t seen the low-budget black and white “original” “The Fast and the Furious” since catching it in a college film society way back when.

And eight movies into the Vin Diesel franchise — with “F9” pushed back to next year — I have to say it’s still the most memorable incarnation of the title. The dialogue crackles, the simplicity of it all makes the narrow focus — on just two characters — pop.

The story? Well, you can see why Universal and the guardians of today’s franchise would pretty much abandon that. But it’s still more fun than any 1950s on-the-lam/on-the-track thriller has a right to be.

“Furious” covers an exposition-packed prologue in the opening credits and ends just before we get a dose of “the consequences.” And an awful lot of what comes between is B-movie action and dialogue at its wittiest.

Dorothy Malone (“Man of a Thousand Faces,””The Big Sleep”) is Connie, the bombshell blonde with the Jaguar XK120, the fastest car of its era. She stops into a roadhouse on her way to “The International,” a road course race that would take drivers from California, into Mexico and back. She’s just minding her own business, waiting for waitress Wilma to open a can of pineapple juice, when a busybody with a gun fingers the fellow in a black leather jacket as Frank Webster (John Ireland, of “Red River,” “Spartacus” and co-director here).

Frank is a truck driver wanted for murder. He’s just escaped from custody. He grabs the gun, the dame and her car and we’re off — to Mexico, so he says.

Connie — “I don’t wanna play at ALL…I guess I should be grateful you haven’t murdered me!”

Everybody, from the roadhouse to the Esso gas station attendant to the fellow sports car racing drivers they fall in with to dodge the cops sizes Frank up as “not the Jaguar type.”

Some of them get downright mouthy, to his face. But Frank has to take it. He can’t risk calling more attention to himself, can’t blow his last chance to skip to Mexico.

There’s a rough and ready quality to the kidnapper/kidnap victim relationship and a gritty, “Don’t tell the insurance company” air to the racing.

It’s not just rear projection and stunt doubles. Ireland drives, and producer, screenwriter and future B-movie mogul Roger Corman was behind the wheel in one of the other Astin Martins, Austin Healeys, Nash-Healeys, Triumphs, MGs, Allands, Maseratis, Bandinis and Porsches on the track.

Maybe it’s not a great film, but it’s great fun and you can see why, 20 years ago (wow) Universal would choose to revisit the title, the crime milieu and car-craziness of “The Fast and the Furious.” If you’ve never seen the original, now’s the time to catch up, seeing as how Vin and Michelle and D. Johnson et. al. have to cool their heels for a few months more.