Movie Review: Aliens, Obama and Eisenhower “play through” on “The 11th Green” 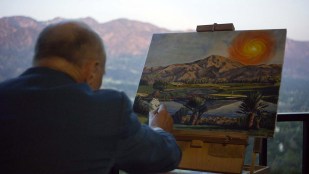 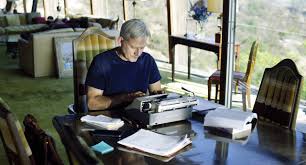 If there’s an overarching, blanket reaction that one can toss over the speculate fiction films of Christopher Münch, it might be “Yeah, and?”

His debut feature and still most famous film, “The Hours and the Times,” was a thought-provoking version of what might have happened on a long Spanish holiday John Lennon took with “the fifth Beatle,” gay manager Brian Epstein.

His most recent theatrical feature, “Letters from the Big Man,” is a dramatic treatment of the telepathic “relationship” that develops between a forest scientist and a Sasquatch she discovers and then tries to protect from government exploitation and destruction.

His new film, “The 11th Green,” is about Area 51 and the Biggest Conspiracy of them All, a contemplative take on when we knew there were aliens, what we gained from them and the mania to keep that secret, even as bits and pieces of it slip out, decade after decade.

The larger theme of these three films is upending everything we know or think we know about the Beatles’ sex symbol, nature and our relationship to it, or government, science, saucers and our place in the universe.

But “The 11th Green” is an “X-files” without genuine suspense, a “Close Encounters” without the wonder, “All the President’s Men” with a supernatural twist, but without a compelling “Deep Throat.” It’s dispassionate and intriguing, sure. Yeah, and?

Campbell Scott plays a well-connected independent journalist on this story — about classified government tech making its way into the private sector via nefarious means.

As Jeremy Rudd covers this world and America’s “Big Secret” for a streaming news program in the “Democracy Now!” mold, he keeps his distance from the UFO buffs who are onto the truth, but can’t get facts to back it up. And if he’s paranoid — refusing to fly, punching the “unlock” key on rental cars from an explosion-safe distance, writing his essays and reporting on a typewriter, which can’t be hacked — the man has his reasons.

The death of his semi-estranged father (Monte Markham), a highly-placed Air Force general in the intelligence sector, doesn’t stop the reporting. Dad knew things, knew people and kept notes. His office is decorated with service patches — odd “units” with the face of a “Communion” E.T. embroidered on them.

Jeremy meets the old man’s trusted assistant and organizer (Agnes Bruckner, who played Anna Nicole Smith in a TV movie), deals with his cremated remains and throws a party with his father’s circle of retired and semi-retired military neighbors in the old man’s Mid Century Modern, golf course view desert home, which used to belong to Eisenhower.

Things turn interesting — hints of what he’s suspected, that they KNOW he knows — and testy. By and large, these are reactionary men bent on keeping their secret, hinting at the “cabal” in charge of maintaining that silence at all costs.

And one (David Clennon of TV’s “thirtysomething”) is downright belligerent to the “treasonous” reporter with “The Peking Press,” and about “the colored socialist” in the White House.

That’s where things take their big turn as we settle into three connected timelines. The current moment is “the recent past,” when Obama (never named, but played by Leith M. Burke) is finishing up his term in the White House, weighing what to do about “E.T. Deep State.” There’s Eisenhower’s quite-active late ’60s retirement in Palm Desert, fielding calls from the Johnson White House, advising escalation in Vietnam, rebuffing any involvement with “that dirty business” with “The Visitors” and that whole Aliens are My Co-Pilot thing.

And then there’s the distant past, a timeline that begins with America’s first-ever Secretary of Defense, James Forrestal (Ian Hart, who played John Lennon for Münch and others), presiding over the birth of the Atomic Age and the rise of flying saucer sightings, a man haunted by all this, “11th Green” alleges. That’s the timeline where “The Visitors,” aided by “The Group,” (“Those dastardly men!”) meet presidents (Ike among them) and begin to influence our technology, foreign policy and the planet’s future.

That first reference to “deep state” got an eye-roll out of me, an “Oh no, Münch is going down the QAnon rabbit hole.” And that’s not entirely wrong.

As he puts Obama and Ike in the same room (Via “dreams,” maybe?), debating “How were you planning on dealing with the public” as each faced the choice of telling people “the truth” about Groom Lake, Area 51 and “visitors,” “11th Green” soberly sizes-up how that might be done. Ike’s 1950s complaints that this secret could not be kept because saucers were showing up everywhere, and being filmed, and people “can see them with their own eyes” come into play. If a cabal was conspiring how to “break” this news to us, maybe letting it drip drip drip out over 75 years would “normalize” it.

The “shock” of discovering we’re not alone would disrupt not just human-race-centric religions and our supposed exalted place in the cosmos and create universal paranoia about what “they” might “want” with us. It would shake us at the core of our being, our sense of individualism and self-determination, so those in-the-know in the movie argue.

Scott maintains a stoic presence at the center of all this, a man being followed but somehow sensing that the SUV tracking his every move won’t come right out and kill him. Not in any traceable way, anyway.

Burke’s “Lori Larkspur” character is both obviously a woman with her own secrets, and exactly the sort of “honey trap” a loner journalist might fall into.

It’s unsettling to hear the president (George Gerdes) who warned of a “military-industrial complex” pulling the strings in Washington, fretting as he and Obama discuss an “E.T. Industrial Complex.”

“At least ‘The Enquirer got it right” is a joke no U.F.O. buff needs explained.

But the scenes where an impassive “visitor” (Tom Stokes) in Jesus hair and robe sits in on the Meetings of the Presidents are just laugh-out-loud silly.

Back-engineering Forrestal’s fate via “Visitors” and the secret and “The Cabal” is both labored and ludicrous.

And the story’s urgency, the thing that drove “The X-files” movies, and to a lesser extent, the TV series, is seriously wanting. With a climate in crisis and a planet veering into fascism and military competitions pointing towards a future cataclysm, keeping the secrets to free energy and leaps forward in aviation and space travel (“Flying saucers don’t run on gas!”), Rudd wonders “What’re they WAITING for?”

The viewer of “The 11th Green” can wonder that, too.

With every minute of underwhelming low-budget faked “alien encounter” archival footage, with every shift of scene, with every moment where conversation is chosen over action and undramatic intrigue wins out over drama, “The 11th Green” shows more interest in showing golfers walking the course than in the suspense of what will happen when somebody actually hits the ball.

Credits: Written and directed by Christopher Münch. An Antarctic release.

2 Responses to Movie Review: Aliens, Obama and Eisenhower “play through” on “The 11th Green”