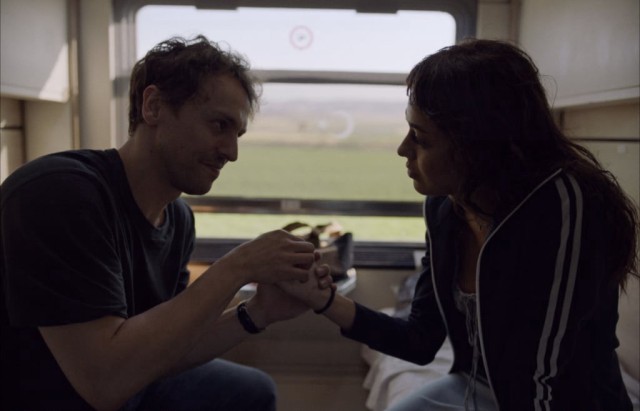 That rich Hollywood tradition of throwing two people together in an unusual way earns a Turkish twist in “One-Way to Tomorrow,” a simple romance about two people thrown together on a long train ride.

Director Ozan Açiktan and screenwriter Faruk Ozerten, and the stars of “Yarina Tek Bilet” (its Turkish title) push that convention to its limits when Leyla (Dilan Çiçek Deniz) meets (Ali (Metin Akdülger). My stars, is this fellow annoying.

He’s asking questions the moment he steps into the compartment they’re sharing. He’s making observations. He won’t stop talking. He tells her, “I believe that’s my seat.” Is he checking her out? He eavesdrops on her cell phone conversation, even after she takes the call down the passageway.

Ali literally chases her out of the compartment before he can even get her name. But hell, wouldn’t you know it? The train is booked full. She skulks back.

This is going to be one long overnight ride (14 hours) to Izmir.

But it turns out that WAS his seat. They’re ALL his seats. He booked the entire compartment, but three friends “couldn’t make it.”

“So they DITCHED you,” she cracks (in Turkish, with English subtitles).

Riding facing backward gives her motion sickness. Not a good look, even for someone as good looking as Leyla. Her questions, when she starts firing them off, have an edge.

“Are you a lawyer?” she says, returning his courtesy of looking through her luggage and seeing law books — and a harmonic.

“For now,” he replies, cryptically.

“Are you HITTING on me?”

Well, maybe not. Not yet.

She finds pills. He tells her they’re for his ticker.

“Do you have a broken heart?”

“One-Way to Tomorrow” is a Turkish “Before Sunrise.” It’s a long night of chatter, bickering, drinking, lying to the conductor (Turkey’s “liberal” Muslim policies have limits. No unmarried couples can share a compartment.), missing a stop and having to find their way back on board.

Along the way, each gets a lot off his or her chest. Each will start to peel off the barriers to connection. And some of those connections, by coincidence or subterfuge, are brittle and quite funny.

“One-Way to Tomorrow” is a bit of a jolt to Western expectations about what a Turkish film might be. It’s not a laugh riot, but not reserved, oppressive, not remotely Iranian, Egyptian or Palestinian in its sartorial or sexual mores. Charming and sexy, it’s still not exactly “Western” either.

Yet while there’s much here that we’ve seen before, and the banter isn’t as witty or faux profound as it was in Richard Linklater’s “Before Sunrise,” without a hint of that film’s treatment of the scenery they pass through, it is revealing and rewarding in its own ways.

A winning cast, characters with painful emotional baggage, sad and yet also funny reasons for each making the trip build towards a nice cinematic catharsis.

Whatever Turkey’s politics or cultural bent at the moment (A lot of countries are living through a “Nothing to Boast About” era.), “One-Way to Tomorrow” makes the case that adding a healthy sprinkle of Turkish cinema to its menu is another way Netflix’s “foreign film” selection can make the world seem smaller and more intimate. More please.