Netflixable? Germans “Isi & Ossi” hunt for laughs on the way to romance

Posted on February 14, 2020 by rogerinorlando 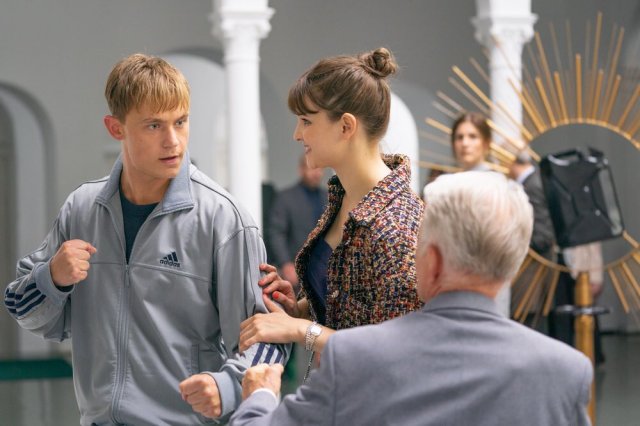 Silly Germans. Don’t they know only Judd Apatow can get away with a comedy with a two hour run time?

And even he only pulls it off every third or fourth movie.

“Isi & Ossi” is an old fashioned screwball romance about two crazy kids from different classes who “date” to rub her rich parents the wrong way.

That’s straight out of 1930s Hollywood. And in case you’ve forgotten what was going on in Germany in the 1930s, the older characters in this farce remind you.

“Democracy is crap, and I was around for Hitler!” is slightly funnier in the original German, although you can watch/listen to this dubbed, if you so choose. It’s disorienting to hear African-American English speaking voices dubbing the Aryan rappers in a Mannheim rap battle, but to each her/his own.

Isi (Lisa Vicari) is a pretty young rich thing — real name, Isabel — who “has the brains of a gummy bear.” She’s just finished high school and is resisting her “trust fund” parents’ efforts to shove her into college. Her only talent is cooking, which she picked up from the staff at home.

Finding out Mom Felicity Huffman’d her high school degree and her admission to college settles it. She’s in open revolt. She takes a job at Tommy’s Burgers, where “It’s been proven our food makes people blind and impotent.”

That’s where she meets Osi — real name, Oscar (Dennis Mojen) — a brutish working class East German who sees a way out of his family’s money-losing gas station with his fists. He’s a boxer who needs sponsor cash to get his “big break” fight.

Isi comes on to him to rattle her folks and open their wallets for New York culinary school tuition. She’s not very good at this throwing herself at a guy thing, and he’s no good at courtship. Too crude, coarse, profane and hot-headed.

His Arabic pal (Walid Al-Atiyat) counsels the “Rocky” approach — “Can you give a compliment? Rocky smothered Adrian in compliments! ADRIAN!”

But when Isi and Ossi come clean with their schemes, the die is cast. They’ll scam her parents by being the Couple from Hell, scaring them into paying him off and sending her to New York. 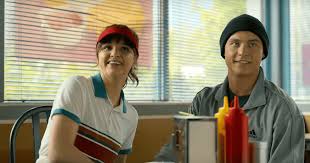 How you stretch that thin, worn-out comedy concept to two hours is you let almost every scene go on past its comic payoff, you shove in a little tender confessional moment or two with the parents, and you remember the best thing about The Beatles’ “Hard Day’s Night.” You add a hilarious grandpa.

Give the old man a shot at a rap battle, find your movie’s biggest laughs. Get Grandpa drunk and ranting about “Hipsters” and “A-rabs” and “that fairy, Hitler,” and at least you’ve got what passes for comedy here.

The bull in the China shop Ossi “courtship” stuff has a chuckle here and there — Tschüchin, the Arab friend, turns an art gallery show inside out in the crudest “Everybody’s a critic” way.

But mostly, “Isi & Ossi” is a reminder that the Germans aren’t famous for their sense of humor, even if they have finally gotten around to making their own Hitler jokes.

Credits: Written and directed by Oliver Kienle. A Neflix release.

1 Response to Netflixable? Germans “Isi & Ossi” hunt for laughs on the way to romance