Movie Review: Blumhouse finds the dark side of “Fantasy Island” 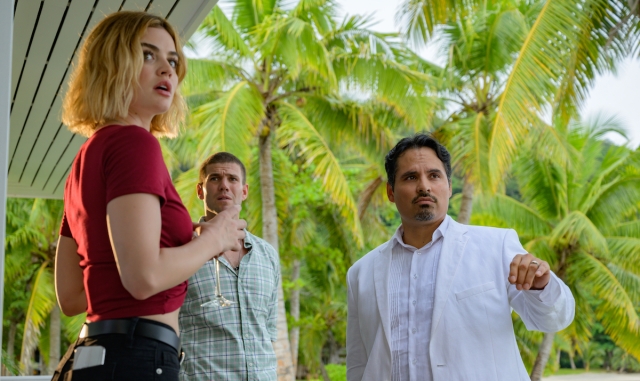 “Fantasy Island” is showing in a Florida beach town cinema filled with retirees.

It doesn’t matter that they don’t know from “Blumhouse,” and have no idea what they’re in for. This is the way it meant to be seen, not so much because they’re old enough to remember the soapy, has-been star-studded TV show of the ’70s, but because horror studio Blumhouse has re-imagined it as a grim tale of grappling with regrets.

“Regret is a disease,” our host, Mr. Roarke (Michael Peña) tells his guests.

And whatever young horror fans have among the things in life they wish they could do over, it takes some years to compile genuine remorse over misdeeds, paths not taken and the like.

The guests are a lonely woman (Maggie Q) dwelling on the man she turned down and the life that got away, the cop who was a soldier’s son and longs to play-act like he’s in the military (Austin Stowell), two brothers by different mothers (Jimmy O. Yang and Ryan Hansen) who want to sample the hedonism and excess of great wealth with an epic pool-party filled with models and the embittered 20something (Lucy Hale) who wants revenge on her high school tormentor (Portia Doubleday) ten years after the fact.

The rules are that they must “see the fantasy through.” They can’t bail, even as they find themselves learning things they don’t want to know about who they are.

“I’m sorry, is this a vacation or a therapy session?”

“It can be BOTH…This is Fantasy Island. It’s as real as you make it.”

What they experience are a collection of fairly humdrum life do-overs or facile dreams of excess. Mr. Roarke is always there, hands in his white linen pockets (Peña has none of Ricardo Montalban’s smarmy, menacing elegance), offering pithy aphorisms as teachable moments.

“I am afraid that the problem with ‘having it all’ is that other people want to take it!”

I am afraid the biggest problem with “Fantasy Island” is the screenplay’s fixation on EXPLAINING how all this is possible. The arriving guests may speculate on drugged drinks and LARP (live action role-players) and “holograms, just like Tupac!” The “answer” is far dumber and eats up the entire third act.

The characters are blandly interesting, the engineering of how their fantasies might overlap is clever right up to the moment it isn’t, but the dialogue is flippant and often funny.

The moments of peril seem like “Saw” outtakes, and the big “EXPLANATION” could bring Harlan Ellison back from the grave for another lawsuit.

Will there be a sequel? Don’t bet against it. Me? I’m just waiting on Blumhouse’s “The Love Boat.”