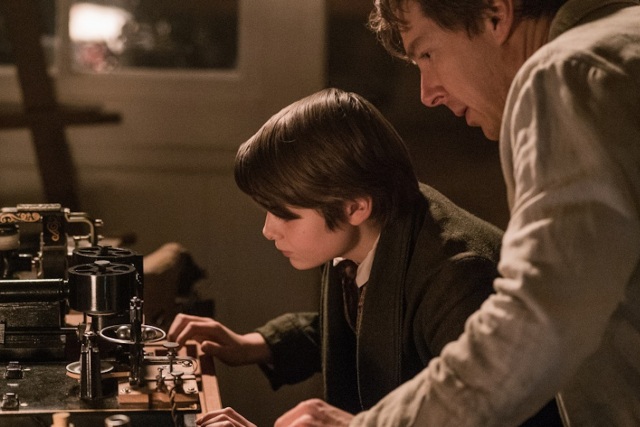 “The Current War” is a flawed period piece that was caught up in the meltdown of The Weinstein Co. and the grotesqueries of its founder, Harvey Weinstein, who often did to movies what he allegedly did to many women within his reach.

An all-star cast, a splendid story and top drawer production values were doomed to disappear after a disappointing debut at the 2017 Toronto Film Festival.

But Alfonso Gomez-Rejon’s (“Me and Earl and the Dying Girl”) orphaned film has been rescued (by Martin Scorsese) with a sparkling, at times dazzling re-edit, and its Gilded Age glories can be wholly appreciated in “The Current War: Director’s Cut.”

Benedict Cumberbatch is the mercurial pop culture icon-as-inventor Thomas Alva Edison, the “Wizard of Menlo Park,” the latest genius on his “Sherlock/Imitation Game” resume. Michael Shannon is the pragmatic but (in this version) principled industrialist George Westinghouse and Nicholas Hoult is the arrogant but brilliant immigrant-dreamer Nikola Tesla in this lively recounting of how the world became electrified.

It’s about the late 19th century struggle to illuminate America. Which current would light up Mr. Edison’s (or Mr. Westinghouse’s imitation) light bulbs, DC — championed by Edison — or AC, the horse Westinghouse backed?

Which company and its genius backer, once this rivalry had been wholly joined, would illuminate the Columbian Exposition, the 1893 Chicago World’s Fair? And whose system would power the electric motors that would soon run the world, the appliances that would make “convenience” available to the masses?

A dazzling opening act of shadows, candlelit glows, sumptuous robber baron interiors and crackling dialogue sets all this up. Edison here is a flamboyant showman, stunning investors with his greatest invention, demonstrated on an open field on a snowy night near Menlo Park, New Jersey.

“I hope you brought your checkbooks.”

“It’s like someone took a hammer and smashed it into his face!”

Westinghouse is the one who sees things in terms of cost, practicality. The man whose fortune was made on the steam brakes that made rail travel safe claims to be guided by “legacy — leave the world a better place than you found it.”

He sees the ruinous infrastructure costs of Edisons Direct Current (DC) as limiting it to only cities, to only the wealthy. Alternating Current, which he presses his engineer, Frank Pope (Stanley Townsend), to perfect, will allow electricity to be transmitted over vast distances, slashing the number of power stations and cutting “copper” costs.

The man knew his nickels and dimes. Pope? He wasn’t so sure.

“I really don’t think it can be done,” Pope grouses.

“Because ‘He’ would have already done it.”

“Current War” perfectly captures Edison’s public persona. His credit-hogging and showmanship made him infallible in the public eye, and he expected that to scare off those who would copy him, rip off his ideas, steal the credit for his bulbs, motors, phonograph and later kinetograph (motion pictures).

His secretary (Tom Holland) is closest to him, and still dazzled. Tesla came from Europe to work for him, and is somewhat more sanguine and just as brilliant and opinionated. He knows AC is the way to go, and as Edison dogmatically doubles-down on the DC bet and refuses to even consider the Serb’s big ideas, Tesla walks out.

However close the film hews to the facts (close enough, although we called them “robber barons” for a reason), the period details here are spot-on, from the rail coaches to the first electric tram, yellowy oil-lit lamps to the white-light bulbs that replace them.

Edison, a former telegraph operator, swaps Morse Code insults and jokes with his sons, nicknamed “Dot” and “Dash,” tapping them out with spoons on bowls, etc.

Tuppence Middleton and Katherine Waterston bring spark to the roles of the ever-supportive wives, Mary Edison and Marguerite Westinghouse. In them, we sense how the feud that erupted between their husbands began with a personal affront. The Edisons were to have a formal introductory dinner, with a little shop talk, at the Westinghouse mansion. Edison brusquely stood them up.

The “War” escalated, with capital punishment becoming a furious bone of contention as Edison, whose vow was to “never make anything that hurts people,” pushes the idea that Westinghouse’s AC system “is lethal,” and only perfectly-used when it powers the world’s first electric chair.

Humor and swagger, ego and pathos are tied up in “The Current War.” It’s a tight picture, never more than in that sprint of an opening act (the first 35 minutes). But the pictorial grace notes are glorious — Niagara Falls frames the story.

Yes, it feels old-fashioned, playing up the virtues of the contestants. Civil War veteran Westinghouse never wants to lay off workers, turns cutthroat only AFTER Edison, and the film skips over how he was able to mimic but not copy Edison’s patents. Edison? Righteous to the point of self-righteous.

The movie gives Tesla just enough of the story to remind us why he is remembered along with the fellows who brought General Electric and Westinghouse into homes the world over.

One bit of casting doesn’t quite work. McFadyen is rarely cast as oligarchs and villains for a reason. Think of what John Goodman or someone with genuine menace could have brought to Morgan, an ogre with Harvey Weinstein’s looks and greed that knew no bounds. Cumberbatch’s Edison walks all over McFadyen’s Morgan. That didn’t happen.

It may not be the Oscar bait it was once pitched as. But “The Current War” is still a fine picture, sharper in focus, quick to identify all the many players in this epochal struggle, all improvements made since it left the hands of The Weinstein Co.

With this “Director’s Cut,” Gomez-Rejon and his editors have saved a witty, well-acted and gorgeous-looking movie and given it the heart, history and intellectual heft it needed to come off.

(The REAL Edison vs. the one in the film? Read more here.)

MPAA Rating: PG-13 for some disturbing/violent images, and thematic elements