Posted on October 14, 2019 by rogerinorlando 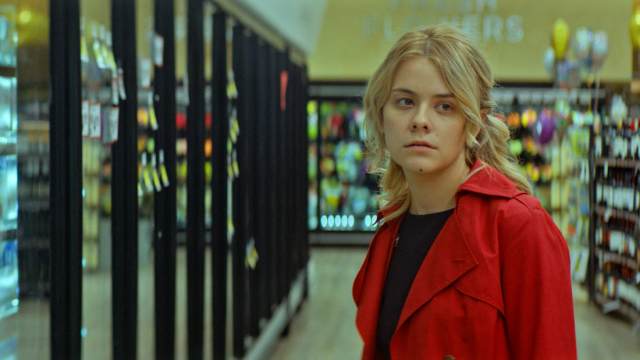 “I know a girl from a lonely street
Cold as ice cream but still as sweet…Live in dreams Sunday girl.”

In Peter Ambrosio’s witty, biting and amusingly inconsequential indie comedy, Natasha (Dasha Nekrasova) is a woman with shades, a red trench coat and a mission.

“Sunday Girl” follows her through what we guess is a Sunday as she motors in her vintage VW Beetle from house to hipster house in Lafayette, Louisiana, dumping guys.

She’s dating five. Four have got to go, because she’s decided the bearded hipster, George (Brandon Stacy) is the one.

“Sunday Girl” is a movie of those conversations. Natasha knocks on a door, often having to approach it several times, building up a little more nerve each time.

She’ll say something like “You’re not ‘it’ for me.” Usually, that’s before she offers breakup sex. At some point, she’ll angle for the door. Maybe she’ll ask for gas money before popping on her shades and moving on.

“I have a busy day.” Indeed she does.

The guys? Most of them aren’t even identified in conversation. Neither is the film’s location. I stared at the cute, older Southern Arts & Crafts houses, sitting on cinderblocks, caught the name of a restaurant, “Eat Leauxcal,” and tracked it to Louisiana. Nobody here has an accent.

The guys — some of whom quake or break down — struggle to cope with the news. One has a good old fashioned tantrum.

Victor (Bilal Mir) is a poet, so he has her best description.

“I don’t really think of you as a person, more a feeling.”

Natasha? In writer-director Peter Ambrosio’s eyes, she’s “Sunday Girl” chilly. A suitor says “Sometimes I just want to kill myself,” and her eyes light up.

“How would you DO it? That always hangs me up!”

But she plainly has something — charisma, sex appeal, libidinous tendencies. Even if she’s just “Lafayette hot,” they’re all drawn to this artist who photographs people in tears, “usually in hospitals or cemeteries.”

In an earlier age, she’d have taken her ’71 Beetle to Austin. The rents are lower and the competition to stand out thinner in little Lafayette.

Here, she’s the best game in town. Even her boss, the older art photographer Anton (Anthony Marble), makes a play, an offer to take her abroad for some “assignments.” She’d…like to.

“It’s not what people claim they want,” he huffs. “It’s what they actually do.” 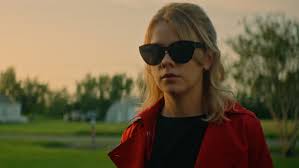 Nekrasova, an indie film actress and writer (she turned up in “Mr. Robot”) makes an entertaining locus of all this comical angst and upset. There’s an unpolished quality to her performance, the affected way Natasha dons and removes her sunglassses, smokes a cigarette as if the only times she touches one are on a film set.

She isn’t the new Greta Gerwig, even if “Sunday Girl” smacks of Early Greta “Mumblecore” (it’s awfully chatty) fare. She’s her own deal, playing Natasha as a young woman fronting her “confidence” while confused, impulsive, scared to death people will see through her pose.

As Anton suggests, it’s not what she says she wants, but what she does that counts. And for this “Sunday Girl” (limited release, Nov. 8), her drunk dialing tendencies give away the game.