There’s a nasty musical joke that runs through “The Mountain,” Rick Alverson’s morose tale of The Last Lobotomy Doctor and his newly-hired photographer, driver and wingman.

Andy, played by Tye Sheridan with a single facial expression, from start to finish, grew up in the home of a German-born skating coach (Udo Kier) who liked nothing better than to drink and watch “Perry Como’s Kraft Music Hall” on the television.

Como’s music is the joke. It turns up again, here and there, within Andy’s world in Alverson’s deflating psychological odyssey. Because if there’s a musical allegory for the childlike, catatonic state Dr. Fiennes (Jeff Goldblum) leaves his patients/victims in, it would have to be the easy listening sounds of Como crooning “Home on the Range.”

“The Mountain” is Alverson’s most accessible film, and if you know “The Comedy” and “Entertainment,” you realize how little that statement says. He’s an obscurant writer-director who concocts discomforting movies of arty pretense and acting intensity.

By those standards, “Mountain” is practically a road comedy. Because that’s where it finds its life, on the road.

Andy runs the Zamboni and sharpens skates at the rink where his father works in upstate New York. That ends with his father’s death.

Andy is haunted by memories of his mother, unsent letters to her, visions of how she might be now. She’s in a mental institution, which in those less enlightened days (the early 1950s) was labeled an insane asylum. There were lots of them, even back then.

Andy finds this out when he has an estate sale, trying to get rid of his father’s things. The tall, white-haired fellow who buys Dad’s old pipe tells him, “I knew your dad. I’m Dr. Fiennes. You can call me Wallace. Or Wally. That’s what the girls call me.”

The perfect Jeff Goldblum line is followed by the kicker, delivered in that halting, revealing cadence that is Goldblum’s trademark.

“I was one of your mother’s…physicians.”

That’s all Dr. Fiennes will say about the mother. No, he no longer works “there,” and can’t “get you access to her…But I’m sure she’s…comfortable…there.”

He makes a proposal. He could use an assistant, “somebody to give me a hand with stuff. Take photos.”

He talks Andy through using the then-new Polaroid Land Camera.

Goldblum gives Fiennes a confidence that we frequently see shaken. He has the look of pained recognition, replaced on occasion by a kind of slack-jawed guilt.

He drinks and chases skirts after hours, although Silent Andy isn’t much of a wingman.

Alverson serves up a saga of quiet observation, austere white-walled hospitals and rarely-speaking staff. There’s a library level of silence in most of these places, perhaps a product of Dr. Fiennes’ work.

Lobotomies, basically severing connections in the brain with what amounts to an ice pick punched through the corner of the eye socket, were the psychological profession’s desperate solution to a helpless situation — increasingly crowded mental institutions where they weren’t helping many, and the need to calm, quiet and more easily control the population was paramount.

It’s just that Fiennes, no longer employed at any single institution, merely a freelancer, is practicing a dubious craft that common sense peers and administrators were starting to see as barbaric. The tide was changing on the procedure, something echoed in a not-quite-testy newspaper interview the good doctor gives at one point.

Fiennes knows this, has his own suspicions about what he is doing. And yet, he persists.

Chronically depressed Andy photographs patients after the procedure, sometimes before.

“Read the woman. She’s in distress. I’m going to help her. Now take a picture.”

He chats with them, asks a lot of questions. His instinct is to comfort them. But sometimes, they ask HIM questions, which he cannot answer.

“Why are they screaming? Does it work? Is it dangerous?”

He’s having weird dreams and visions. His conscience is eating at him. What might this road trip be doing to his fragile psyche?

Alverson serves up a lot of slow mo, freeze-frames and arresting angles, capturing Andy’s dreams, melding the disturbing with the familiar. What he’s most familiar with is skaters.

There’s a lovely but quiet and disquieting skating school tribute to their late teacher, a lot of random scenes of Dr. Fiennes flirting with ladies in restaurants, picking them up in bars, in between miles of wintry, wooded roads and an endless parade of hospitals and patients, almost all of whom are women — something borne out by the shocking statistics of the day. 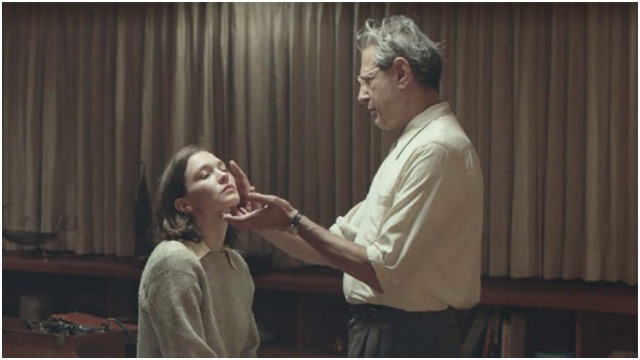 I’ll watch anything with Goldblum in it, and “The Mountain” has its rewards, although no one should be fooled into thinking this is anything but disturbing. Sheridan’s joyless, blank-faced turn just underscores that.

And Alverson has a serious cinematic anti-climax problem. He cannot escape this morbid trap he’s driven us into. He finds grace notes, and eventually a conclusion. But that is preceded by 15 minutes of scenes that walk the movie backwards from where it’s taken us.

Those gripes aside, he’s still made a meditative movie about the fragile psyche, about the fumbling around the Best Minds in Science have been doing for well over a century when it comes to addressing mental illness and the guilt and denial that precede every failed “cure” in the minds of those struggling to implement it.