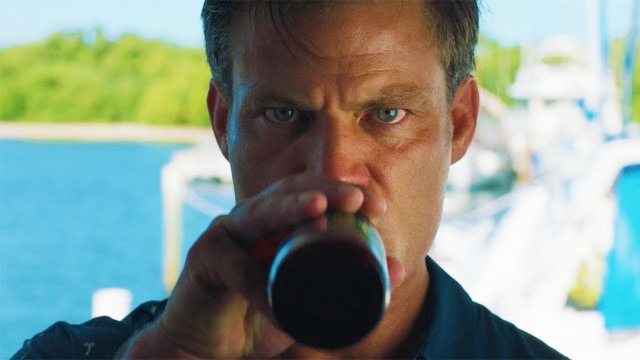 The set-up is “love triangle” simple — two testosterony guys and a woman who comes between them, trapped on a boat in the middle of the sea.

Roman Polanski launched his career with that scenario, the 1962 classic “Knife in the Water.”

Only that was simpler than simple. The setting was an 18 foot long sailboat, the only weapon on that claustrophobic vessel — a rigging knife.

“Dead Water” — characters use the phrase “Dead in the Water” several times, so plainly they wanted to use that over-used title for it — parks our menage a trois on a 75 foot long Lazzara luxury motor yacht.

Hey, if you need product placement money to make the movie, there’s no shame in that. Name the make of the boat, show it off to good effect, especially in the closing credits.

Casper van Dien (of “Starship Troopers”) plays a hard-drinking jerk of a trust-fund-baby orthopedic surgeon, ready to help his just-mustered-out Marine captain pal “Coop” (Griff Furst of TV’s “The Magnificent Seven”) lose a little PTSD with some time on the water.

Coop’s TV-reporter wife Vivian (Brianne Davis of TV’s “Six)? She’s the atom on board, tugging at these two free electrons, setting off a competition that, well, maybe the screenwriter should have developed a bit more fully.

Because wasting an hour on poker, boozy reminiscences and — I kid you not — a drunken game of “Truth or Dare” — may establish that Coop’s tense, wrapped-too-tight and stressed, that John the surgeon is trying to set him off, and that Vivian is the object of desire and jealousy for them both. But we know that the moment they all climb aboard in the U.S. Virgin Islands where John bought the “Bella Would.”

Bad puns are standard issue when it comes to boat names. I’ve owned a “Tranquil? Aye-Sir!” and “Over-Easy” and “Sail La Vie” (already-named, bought used, and it’s bad luck to rename a boat, even if it’s a stupid name). “Bella Would” is a pun on the famed Marine Corp WWI Battle of Belleau Wood in France.

John was best friends with both Coop, and Coop’s fellow Marine and older brother Danny, who is dead. So, it’s a tribute?

Anyway, things get weird, motives get murky, and then Judd Nelson shows up for a little third-act melodrama on the high seas.

“Dead Water” is all about the gin-clear Caribbean, although the picture is depressingly cabin-bound for most scenes.

“You can eat your words, or you can eat this bar.”

“What are you, just a one-bullet Marine?”

And there’s amusingly clumsy foreshadowing in a few other exchanges.

“You ready for a weekend that’s going to change your life?”

The characters have a somewhat psychotic idea of what constitutes “no harm, no foul.” Pranks have a lethal edge. Violence hangs in the air, although we can’t for a second think the surgeon would be stupid enough to test himself against a Marine. 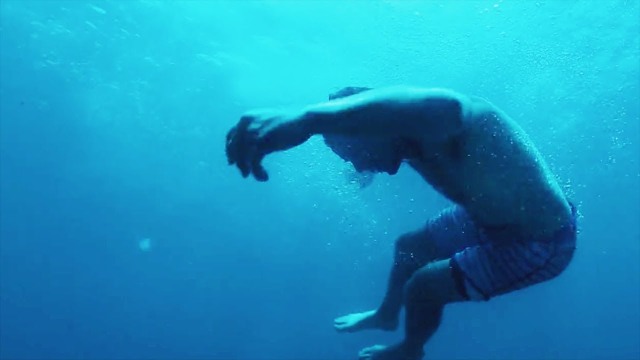 But I brought up the boat size difference between “Dead Water” and “Knife in the Water” for a reason. It may make more sense, realistically, to separate characters for private conversations, seaway sex and scheming at sea. Nobody really knows what the other people are doing, what they’re capable of.

But the movie wastes most of its run time giving us tours of the boat, Zodiac (dinghy) rides and frittering away the tension that’s supposed to rise and rise with these three trapped in close quarters.

No wonder they needed Nelson. It’s just that his very presence — spot-on as his performance may be — is a cop out, an admission of defeat.

“Dead Water” has all it needed to create suspense and grim, up-close-and-personal conflict. Why throw him in there for the third act?

Because the movie’s comatose until he shows up. Not that the cast is bad, but the characters are blandly sketched-in, perfunctory “types” in a claustrophobic setting that promises us a better movie than director Chris Helton delivers.

Still, if you’re boat shopping, at least it’s better than the online videos at the boat builder’s website. “Dead Water” still sinks more than it swims.

MPAA Rating: R for language, some violence and sexual content