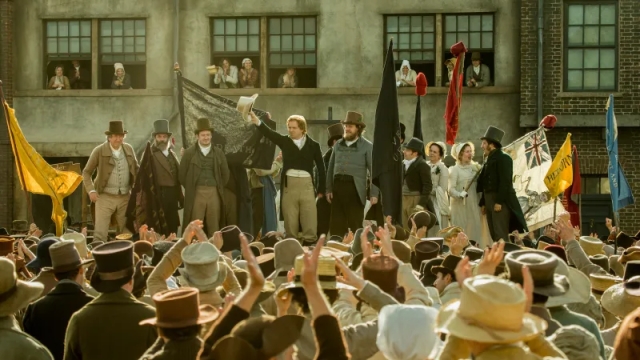 His politics make “Peterloo” a natural subject for Mike Leigh. British cinema’s champion of the working classes has celebrated their pluck and plight in films from “High Hopes” and “Life is Sweet” to “Vera Drake” and “Career Girls.”

“Peterloo,” about an infamous British massacre of the working poor by the same redcoats who’d just defeated Napoleon, a slaughter carried out at the behest of factory owners, callous upperclass judges, a judgemental preacher and others of the Manchester ruling classes, fits right into Leigh’s worldview.

And his “Mr. Turner” and “Topsy Turvy” show a love of period detail that blends in with his lifelong obsession with almost unfathomable British accents through the ages.

But the sweep of this great tragedy and epic injustice all but overwhelms a director known for more intimate stories. He does the audience no favors, not identifying characters, rarely casting known-names in key roles and not using cinematic crutches like inter-titles to take us through the events leading up to that fateful day in August of 1819.

As the British have been slow to learn this horrid moment of their own history as well, he’s not leaning on “a story we/they all know” and needed to give us a hand. That can make the two and a half hours of “Peterloo” punishing, a school assignment that will require outside reading to wholly grasp.

That so much of the dialogue is in a spoken “English” so dense and archaic that even the English may wish was subtitled doesn’t help, either.

But a bravura opening sets the scene and a sweeping, heart-breaking finale punches its point home. If we don’t remember this, we should, and just a sketched impression of the principals is all that’s necessary to make its case.

A shellshocked young bugler (David Moorst) staggers to his feet on the field at Waterloo, and has to make his own way home to England, to Manchester. Home is welcoming, but crowded. The newly-industrialized city has the smoke of factories, the deafening roar of cotton looms, and a populace struggling to earn enough to feed, clothe and shelter itself.

There was no “peace dividend” after the Napoleonic Wars, just debts and a new set of “corn laws,” tariffs designed to keep British grain producers (merchants) fat and happy.

The poor start to starve. And agitate.

Leigh’s screenplay takes us into pubs and meeting halls, where middle class moderates try to temper the rising fury of young radicals who call for the “mad king” (George III) and his “fat Prince Regent” (Tim McInnerny, hilarious) to be cut off from the public treasury, or have their heads put on pikes.

The franchise is what they all can agree that they want, first and foremost. From radical leader Samuel Bamford (Neil Bell) to the Manchester Female Reform Society, “One man, one vote!” was common cause.

“Taxation without representation is tyranny,” speakers such as Bamford, John Knight (Philip Jackson) and John Thacker Saxton (John-Paul Hurley) bellowed to every crowd, echoing a cry from their American cousins’ revolution just 40 years before.

“Give me liberty, or give me death!” the younger firebrands thundered.

Joseph Johnson (Tom Gill) and his fellow middle class radicals called for all these things, and the repeal of the Corn Tax, from the pages of their Manchester Observer newspaper. Johnson and the others call for Henry Hunt (Rory Kinnear), “The Orator Hunt,” the famed London speaker on behalf of such causes, to come north to address the public.

Watching this with naked contempt, fear and spittle-spewing fury were the magistrates (Martin Savage, Al Weaver, David Bamber, Fine Time Fontayne, Vincent Franklin, Jeff Rawle, Philip Witchurch and David Fielder) of the city, whom we’ve seen hurl abuse and cruelty at the starving, excessive sentences handed down for petty theft and “idleness.” They may have preachers in their ranks, but they have their “rank” to protect, so no wondering “What would Jesus do?” They fear a repeat of the more recent French Revolution, so they petition the Home Secretary (Karl Johnson) for the right to read “The Riot Act,” and for troops. And so troops are sent.

Spies identify the rabble rousers, letters are intercepted and read and the  threat of violence looms, even as The Orator Hunt insists on keeping calm and not having armed citizens there to protect the crowd from the brutish constable (Victor McGuire) and his minions, or from the local horse militia or the Army itself.

The nation’s press is coming, from London, Liverpool and Leeds. Surely nothing will happen with witnesses present.

What Leigh was shooting for here was a modern “Battleship Potemkin,” a filmic polemic about injustice, the haves slaughtering the have-nots, a parable for a world where nothing’s changed. It’s just that Leigh has never been that kind of kinetic, visceral filmmaker.

The actual “Peterloo Massacre” — a term coined by the journalists the soldiers and drunken “yeomanry” (militia) rode down on — is delivered in a string of body blows, blunt strokes and vignettes of murder intercut with the terror of those experiencing it and the smug, sherry-sipping satisfaction of the magistrates, especially Rev. Mallory (David Bamber, a villain’s villain) who brought “the iron fist” down upon them.

Leigh takes so long to get to this point, taking pains to show us lots and lots of background — the famed General Byng (Alastair McKenzie), leader of the troops, preferring to be at the horse track instead of on duty, restraining his troops– that some of the effect of this wrenching finale is muted.

But the slow buildup to the climax allows the viewer to ponder how little has changed in 200 years, how many times “The People” have come close to having a “real” revolution here, there and everywhere else. And how often the military, built on working class backs and populated with working class recruits, is brought in to carry out the will of those with money.

In America, we had the Textile strikes of 1934 and The Battle of Blair Mountain in America’s “Coal Wars,” when America’s armed forces used planes to bomb and strafe miners battling to organize and strike for better working conditions. West Virginia to Colorado, Manchester to Glasgow, the have-nots always seem to fall just short of Bastille Day/St. Petersburg in the English-speaking world.

In “Peterloo,” Leigh reminds us how wars, and anti-labor massacres, are forgotten in the “history is written by the winners” rules of the game. And even if the film gets away from him, here and there, it’s good to have him remind us the game isn’t actually over. Yet.

MPAA Rating: PG-13 for a sequence of violence and chaos

Credits: Written and directed by Mike Leigh.  An Amazon release.