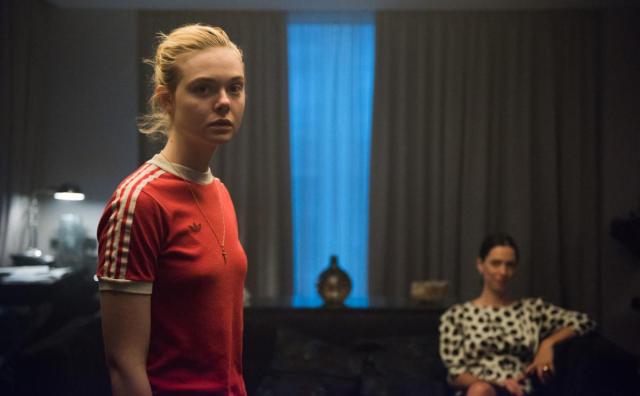 For a couple of moments, the Next Teen Idol musical melodrama “Teen Spirit” lets us see inside the unsavory machinery, the exploitation that drives and underscores every TV talent competition you’ve ever heard of.

Judges who profit from record deal/management contracts with the talent, talent turned into carbon copies of the last version of The Next Big Thing by costumers, choreographers and TV — it’s all here.

But those moments pass, and “Teen Spirit” sags back into the shallow, neon-lit bubble-gummy fever-dream that director’s-son-turned-actor-turned-writer/director Max Minghella (he was in “Handmaid’s Tale,” streaming junkies) serves up here.

But the son of the late Anthony Minghella (“The English Patient,” “Cold Mountain”) landed Elle Fanning as his lead, as the lithe Anglo-Polish Violet who hopes singing can rescue her from the blue collar labor and obscurity of her Isle of Wight (Anthony Minghella’s birthplace) and send her to London, fame and riches.

And Elle is almost enough to make one forget the vapid, incomplete story Minghella-the-younger’s stuck her in.

She sings, and lets us see she’s basically an impersonator — channeling Annie Lennox, Gwen Stefani, Robyn Carlsson and other favorites from her iPod. She’s given choreography, and Fanning’s Violet doesn’t hide her tall, lanky awkwardness, not-quite-mastering the moves that kids privileged enough to have dance lessons since birth take to, easily.

Those would be her competitors at various stages of Britain’s “Teen Spirit” competition. To a one, they seem more polished, more posh. Violet always seems like a kid late for her waitressing job — again — because what she really loves is singing, even if it’s just for the old age pensioners at a local pub.

Her religious Polish mother (Agnieszka Grochowska of “Child 44”) needs her around their house and tiny farm. She needs her income. She doesn’t “want to encourage you,” she says, like a thousand parents in the movies before her.

“I don’t vant you to be disappointed.”

Violet was born disappointed. But one of those drunken, elderly listeners at the pub, Vlad (Zlatko Buric) says “You haff nice voice.” He’s just encouraging enough that Violet uses him as “guardian” when “Teen Spirit” visits the island, looking for talent. It’s only after he’s signed-off on her competing (Mom cannot know) that Violet realizes his story about once being an opera singer in Croatia is true.

Minghella puts great effort into Violet’s performances at various stages in the competition, complete with her losing herself in her fantasies — imagining she’s singing with a band, decked out, and on TV, or a music video with her and her white horse when in actuality she’s on a stage, alone, trying to carry a tune off a capella.

The temptations of the big city — boys, Mom’s protesting reluctance, betrayals and show judge (Rebecca Hall) chicanery — are all trite plot points Minghella pulled from a grab bag in scripting this.

But he scored when he landed Fanning, that eternally gawky starlet outgrowing teen films but not the tall, lanky awkward girlishness which have been her calling card since breaking into films with “Super 8.”

She and Buric (“2012,” “Pusher”) have a gruff chemistry, and they make this trite-and-true traipse towards musical glory worth sitting through, even if one cannot quite recommend you go out of your way to see it.

MPAA Rating: PG-13 for some suggestive content, and for teen drinking and smoking