Documentary Review: “The River and the Wall” 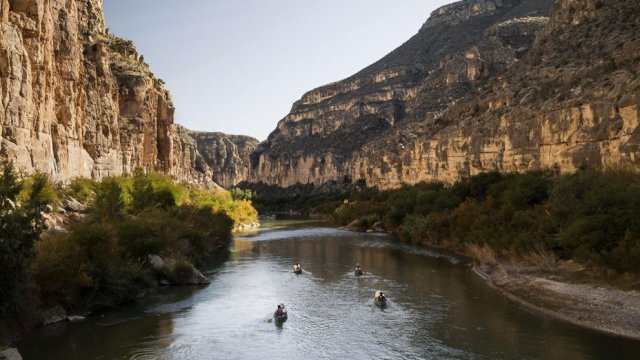 “The River and the Wall” is about a 1200 mile journey from El Paso to the Gulf of Mexico along the Rio Grande, a trip made on foot, bicycle, horseback and canoe by five friends with a support crew.

The idea, Texan wildlife filmmaker Ben Masters says, was to explore an area he’s been hearing about as being particularly vulnerable, from a biological “physical impact,” to a negative impact of Donald Trump’s planned sea-to-Gulf of Mexico border wall.

Their ranks included filmmakers, a river guide who is the son of immigrants who crossed this very river illegally, an ornithologist and a wildlife/wild spaces advocate.

The sweeping footage they captured is moving in its beauty. But the real reason for the film is “reason.” Ben Masters’ movie talks to stakeholders — ranchers, Border Patrol agents, experts on patterns of migration and immigration along the U.S./Mexico border and members of Congress. And none of them think this wall thing is a very good idea, for reasons ranging from the impracticality of it and the lack of utility (It won’t do the job.) to the sheer desecration of this last wild, scenic part of the Rio Grande valley, on both sides of the border.

We see them traverse box canyons and Arroyo, rock faces and a river too dry (thanks to irrigation demands) in many places to travel on by boat.

But hearing GOP Texas Congressman Will Hurd, a veteran of the Secret Service, suggest that “building a wall…in the desert and mountains is just crazy!” is new.

The “campaign promise” looks more and more like a colossal boondoggle, the deeper we get into “The River and the Wall.”

The voyagers pass through what could, in calmer times, be the greatest “Bi-National Park” in the Americas, straddling the U.S./Mexico border at Big Bend Ranch State Park and Big Bend National Park, and the wildness of the place touches the heart.

Seeing big horn sheep, owls and ocelots, all facing displacement if a massive a construction project cuts through, will make you wince. Hearing a Texas wildlife biologist note that hunters there wiped out black bears decades ago, but that they came back into the region, slowly, from Mexico in recent years, pounds home the point.

Wildlife will suffer mightily if this project is pursued.

But hearing ranchers complain about access to border and a million acres of their own land as the wall is to either seize the land or cut off huge swaths of it on the U.S. side of the border, all but ceding valuable farmland to Mexico, is startling.

A montage of news footage, presidents from Reagan onward trying to “fix” the immigration problem and cross-border issues over the decades opens the film. Historians and other experts point to the decades and decades of migrant labor’s freedom of movement to agricultural and other jobs, cut off in 1965, as the real beginning of this vexing national problem.

Using the scenic far reaches of the fourth longest river in America to make their point is a slam dunk.

But when river guide Austin Alvarado, after passing the stretch of river where his parents slipped across, illegally, decades before, stops to climb, in mere SECONDS, a newish section of 20 foot high fencing, showing how easy it is, the more pragmatic appeal is obvious.

It’s expensive and it won’t work. 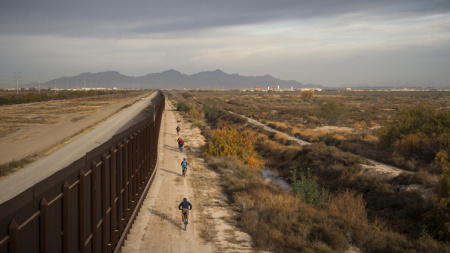 The quintet and their crew ignore the warning to not “do the river at night,” and get a dose of the drug trafficking and human trafficking that goes on,  what Hurd earlier emphasized as “our need to secure our own borders.”

Yes, beefing up border security with electronics and boots on the ground is a good idea, Hurd and others suggest.

But whatever the evening news may show of Arizona or New Mexico, where landowners speak up about “safety” and the “flood” of people trekking through their land, frightening them and sometimes dying of exposure in the process, Masters finds only Texas ranchers questioning the need for a wall and the cost to them if it’s built.

And “The River and the Wall” includes just enough graphics of  statistics — the plummeting numbers of people coming north — to back them up.

Canoe wrecks and crash course horse-backing riding lessons, mud-clogged bikes and weary backsides aside, Masters & Co. accomplish their mission, which was to see and document “the Rio Grande before it is possibly changed forever.”

Thanks to their cameras, we can, too. And act accordingly.