Movie Review: The romantic despair of “If Beale Street Could Talk” 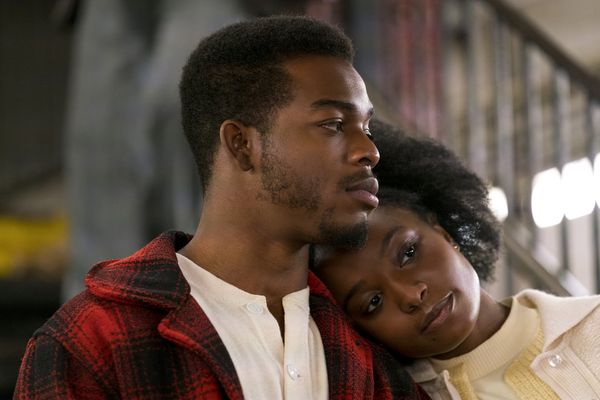 “If Beale Street Could Talk” is a movie that aches.

There’s a romantic ache to the love affair at its heart, coupled with the pained despair of struggling against a racist system that has broken or bent generations that have run afoul of it.

Equal parts playful and sweet, dark and bitter, it froths over with with poetic theatricality of novelist, social critic and gay black man of the 1960s James Baldwin.

It’s the second legitimate Oscar contender from writer-director Barry Jenkins. This is his period-piece social commentary-as-romantic-melodrama follow-up to “Moonlight.” “Beale Street” illustrates the difference between a work of cultural significance in a cultural moment — “Black Panther,” for example — and a movie of cultural consequence.

It’s the story of Tish and Fonnie (Kiki Layne and Stephan James) friends since childhood, growing up along Banks Street in Manhattan’s West Village. They grew up to know, trust and now — as she is 19 and he is 22 — love each other. They’re getting married.

But prison bars separate them as Tish brings Fonny (Alfonzo) this biggest news of their lives. She’s pregnant.

Flashbacks show us their gentle, gradual courtship and the fateful chain of events that have him railroaded into jail, a broke artisan and artist “forced to pay for proving” his innocence despite having both an alibi and geographic disconnection from the crime and the obvious prejudice of a cop with a grudge and a story full of holes.

And scenes set in the late ’60s present encompass Tish passing on the news to her parents, and to Fonny’s, and their struggles to free him from the maw of a system that even in James Baldwin’s time was ancient and established and geared towards mass incarceration of the black underclasses. 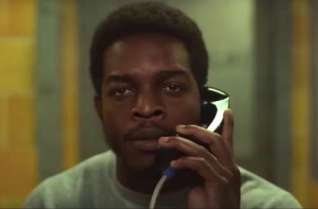 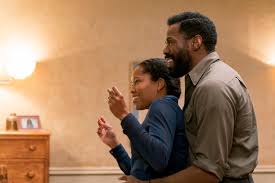 The best of these are the warm moment when Tish, her sister (Teyonah Parris) and her mother (the formidable Regina King) break the news to her father. Joseph (Colman Domingo) has an easy, light manner which we’re sure will be tested by this pregnancy.

But Hennessy cognac, Mom’s charm and his utter devotion to his daughter upend expectations. When he tells Fonny’s father (Michael Beach), “You and me? We’bout to go out and get drunk,” their shared delight will bring you to tears.

But the warmth of that get together is gutted by Fonny’s gloved church-going mother (Aunjanue Ellis), who clears her throat with “I always knew you’d be the destruction of my son,” with her daughters chiming in with blame, judgement and invocations of Jesus.

Fonny’s already in jail, remember, facing “the death that awaited the children of our age.” He may “love me too much,” Tish narrates, hinting at the chain of events that bring him to the attention of the wrong, bad cop. But his mother’s brittle fury and everyone else’s reaction to it puncture the romance even if she fails to totally deflate it.

Jenkins leans heavily on voice-over narration as a crutch, but having Baldwin’s words — an opening title explains his and his characters’ connection to “Beale Street,” and just what that represents to the story’s unfortunate timelessness, that was going to be hard to resist.

He parks his camera in tight close-ups, giving star treatment to a generally little known cast (King and Beach are joined by Dave Franco, as a sympathetic Jewish landlord). Newcomer Layne in particular lets us see the burdens and hurt that Tish must cover with reassurances of love and devotion in what should be the happiest days of her life.

James, who played Jesse Owens in “Race” and John Lewis in “Selma,” plays the tender romantic side of Fonny and his embittered, hopeless imprisoned state with great feeling and skill.

Jenkins treats the story and writing with a reverence that weighs on the picture and contributes to its sometimes tedious pacing. Omnipresent narration adds to the gravitas of the piece, but also tends to slow it down. Some of the language feels anachronistic, and some situations — symptoms of pregnancy — have a naivete that remind us that there were blind spots in the great Baldwin’s life experience.

But “If Beale Street Could Talk” washes over you even as it is getting under your skin. And Jenkins has made it into a movie that is a period piece that too easily seems modern, as timely as this week’s #BlackLivesMatter moment. For all the resilience Baldwin and Jenkins show us here, it is the poet Langston Hughes’ line about “a dream deferred” that comes most easily to mind.

Fifty years, and lives young and old are still battered and shortened by the same conditions Baldwin saw in his lifetime, prompting him to move to Europe the moment he could. Fortunately for posterity, he could still hear his father’s Beale Street talking to him and to the ages.

MPAA Rating: R for language and some sexual content

Credits: Written and directed by Barry Jenkins, based on the James Baldwin book. An Annapurna release.