Movie Review: The Ballet is still the only thing that makes sense in “The Nutcracker and the Four Realms”

Posted on October 31, 2018 by rogerinorlando 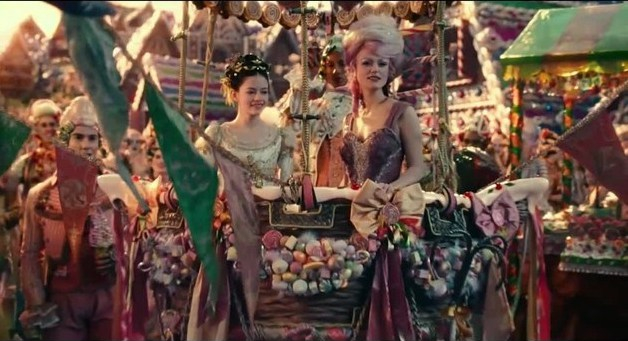 Production-designed to within an inch of its life, backed by the gorgeous music of Tchaikovsky and including a ballet, though not the famous one their “story” was inspired by, Disney’s “The Nutcracker and the Four Realms” offers up a heaping helping of eye candy and treacle for the holidays,

If only they’d had a coherent story and a good actress in the lead. If only those were the only two serious shortcomings in this brainless, cotton candy bauble.

Filmed by Lasse Hallstrom (“What’s Eating Gilbert Grape'”), re-filmed by Joe Johnston (“Honey, I Shrunk the Kids”), and re-written to boot, it’s the sort of movie you don’t need to be told was a hash job followed by a hack job. A child could see it’s a beautiful, eye-popping empty-headed mess.

In Steam Age London young Clara (Mackenzie Foy, pretty to the point of colorless) is coping, along with her siblings and her gloomy dad (Matthew Macfadyen), with her first Christmas without their mother. Even a posh silver egg present from her tinkerer/godfather Drosselmeyer (Morgan Freeman) and the lush Christmas ball he throws every year cannot melt the family’s chill.

The egg requires a key to unlock, and gadget-designing Godfather Drosselmeyer sends Clara searching for that key as the final bit of her present. But a mouse snatches it, she finds herself chasing it through the vast mansion and into The Christmas Tree Forest. That’s where she meets a nutcracker soldier (Jayden Fowora-Knight).

He helps Clara discover that her late mother was a queen in this fanciful universe where such realms as The Land of Enchantment and the Land of Snowflakes and Land of Flowers are in conflict with The Land of Amusement, led by Mother Ginger.

Clara, as the princess, must join the other regents — Hawthorne, Shiver and Sugar Plum (Eugenio Derbez, Richard E. Grant and Keira Knightley) — and stop Mother Ginger  (Helen Mirren), who presides over a realm that is an abandoned, enchanted amusement park.

Every set is more dazzling than the one before. Everything is dependent on elaborate, clockwork gadgets. And an awful lot of it is digital, computer-generated-imagery (CGI).

Most impressive — the mice who swarm into a giant mouse monster, the tumblers who break apart like Russian nesting dolls.

There’s a royal ballet in the middle of all this, telling the “story” of the realms, and it too impresses, as prima ballerina Misty Copeland dances, accompanied by an orchestra conducted, in a nod to “Fantasia,” by Gustavo Dudamel in silhouette.

But none of it makes a lick of sense. The quest is a non-starter and the action — toy soldiers brought to life for the Big Battle — is blasé.

Knightley is the only member of the cast to register, all high-voiced and bubbly and fretful.

That’s the only quotable line from Ashleigh Powell’s disastrous script. Names such as Tom McCarthy and Simon Beaufoy have been reported as among those trying to “fix” it, but there’s no getting over the nonsensicalness of it, no line that is any better than the trite and true — “I wish mother was here.” “We ALL do.”

Grant looks miserable, first scene to last, Macfadyen, Knightley’s “Pride and Prejudice” co-star has nothing to play and Mirren is wasted in a role in which her stuntwoman did all the real work.

Still, it’s quite the spectacle and harmless enough, what with the color blind casting, the high culture (ballet and Tchaikovsky) sampled, the princess resourceful enough to rescue herself.

The most inventive thing about this twist on the Nutcracker “brand” is a modern dance piece re-imagining “The Nutcracker” in modern dance form under the closing credits — far too little, entirely too late to save “The Four Realms.”