Movie Review: “Sadie” is shaped by the grey, working class world she grows up in

Posted on October 6, 2018 by rogerinorlando 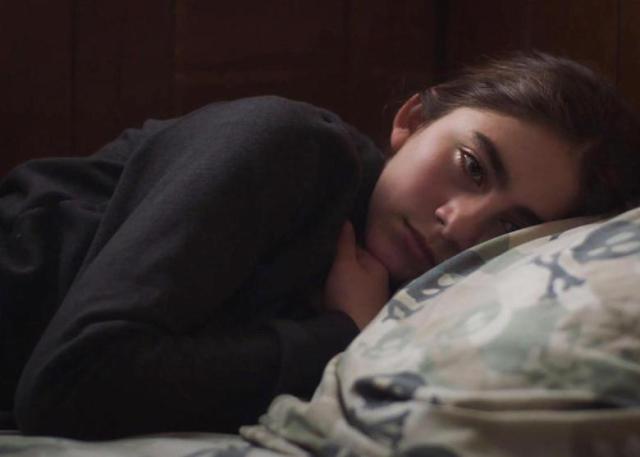 The more violent the video game, the better. She’s into horror films and takes in the world through the jaded eyes, her bleak connection to violence pouring out into the compositions she writes for English class.

She’d scare people, if they only knew. But when you’ve grown up in the dumpiest trailer park in Greater Seattle, when your Dad escaped from the family by constantly re-upping his military service, who’s going to notice a kid like her and wonder what’s going on in her head?

Writer-director Megan Griffiths’ Sundance-produced “Sadie” is a domestic melodrama with working class grit and concerns. Poverty is never mentioned, because the poor don’t talk about the horizons that have closed in around them. We can see it, and so can they.

Sadie, given a poker-faced seriousness by Sophia Mitri Schloss of TV’s “Kicks,” writes letters to her father expressing longing and a tender connection. But even those have an edge.

“I think adults just get nervous when kids are smarter than they are…Adults are so pointless.”

She’s talking about her teachers, who keep red-flagging her bloody-minded essays and ignoring the constant bullying her pal Francis (Keith L. Williams) endures. She might also mean her nurse mother (Melanie Lynskey) and the guidance counselor (Tony Hale) who gives her extra attention because he pines for her mother.

She cuts him down with all the sophistication a movie 13 year-old can muster. She tolerates Bradley, but not his seeming concerned questions about her father, “considering you’re over here trying to sleep with his wife while he’s off defending his country.”

The Shady Plains Mobile Home Park accepts anybody and anything passing for a “mobile home,” and is entirely too close to a junkyard, where Sadie and Francis hang out.

But those days may be winding down. They’re getting sexually curious. Well, she is. And while the director dresses her in mid-winter frumpiness, Sadie’s emerging sexuality is something she’s aware of even if she can’t articulate it to her father figure and whittling mentor, grumpy Deek (Tee Dennard).

The free electron introduced into this atomized world is Cyrus (John Gallagher Jr. of “The Belko Experiment”). He’s cagey about his past and his present, wary about how much to say in front of anybody. Used to be a pilot. Works as a mechanic. Living in a battered, undersized Winnebago.

Lynskey inhabits a working class world as well as the best of them and has hit “The Mom Years” of her career by giving performances both tragic and funny (“Goodbye to All That,” “I Don’t Feel at Home in this World Any More” “Happy Christmas”), but always suffused with realism. She lets us see the neediness in her character, Rae, even as she refuses to compromise on her “type,” her idea of what a man should be.

“You could say that.”

Gallagher suggests similar down-and-out desperation, a working class self-awareness that is he rationalizes just to get by.

“If everybody got to do what they love, there wouldn’t be any janitors or fry cooks. And the world would be a very messy place without any fried food.” 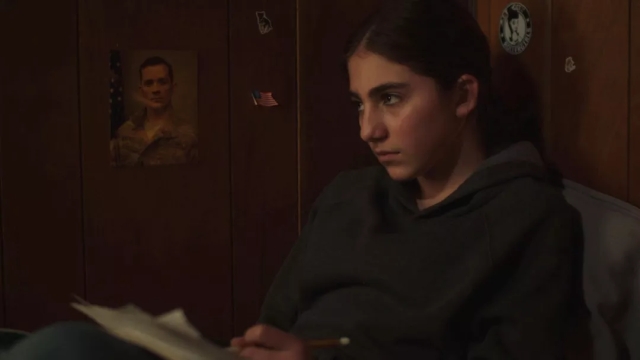 But this is Schloss’s show, and even though everything from her eyebrows to her wiser-than-her-years cynicism screams “CHILD ACTRESS,” she colors Sadie in shades of grey, the eternal color of Greater Seattle.

Deek gives her the Big Life Metaphor in whittling form — “I’d keep it simple — frogs and squirrels and stuff. Men are tough.” Sadie is too sophisticated for that — canny, looking for angles to play to create solutions to her problems, and Francis’.

Schloss lets us see that Sadie is savvy enough to see her friends bully issues and Cyrus’s seriously rough redneck edges, that she’s cunning and nervy enough to think up solutions, too childish to see the consequences of her actions.

Director Griffiths never lets reality slip too far beyond her film’s grasp, though the sexual complications, all of them, play like melodramatic conventions, some less organic than others.

She’s still delivered a convincing portrait of a world and how its limited horizons shape those who might never escape it.