Documentary Review: Is there a Climber alive up to Scaling “The Dawn Wall?” 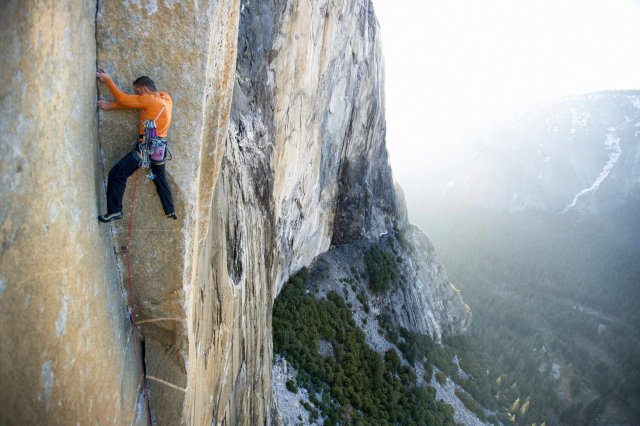 Most people don’t give a lot of thought to rock climbing. It’s a demographic thing, a racial thing, a “Because it’s there” thing that doesn’t connect with the average person without the upper body strength, the skill and determination or the free time.

But for a few weeks in late 2014 and early 2015, America and much of the world were riveted by images from Yosemite’s El Capitan, to two tiny dots climbing “The Dawn Wall.”

At night, the blackness, with El Capitan outlines in dark blue, captured the tiny dot of a camp light, two guys in a tent dangling a 1500 feet up.

Filmmakers Josh Lowell and Peter Mortimer weave a fascinating, upbeat story of obsession, pain, exertion and achievement in getting up close on the cliff-face with Tommy Caldwell and Kevin Jorgesen and into the lives that put them there, attempting an ultimate free climb, The Dawn Wall of the 3000 foot high El Capitan rock in the park.\

It’s mostly about Caldwell, 37 at the time he made the attempt, widely acknowledged as the greatest climber of his generation. Trying to free climb (just hands and feet, ropes only to limit his fall)

“The Dawn Wall” begins with the guys hanging in a cat’s cradle of ropes holding men, gear and tents, where Caldwell takes a “Tommy, what’s the point of all this?” cell call from the New York Times.

El Capitan is “the Mecca of rock climbing,” and the bald, seemingly featureless “Dawn Wall” is its Black Stone in the Grand Mosque, rock climbing’s ultimate achievement.

Caldwell, a developmentally-delayed son of a climber and body-builder who took climbing by storm in his teens, set this impossible task as his goal.

Friends, family and fellow-climbers profess their amazement at his dexterity, infinite patience for reasoning out a climb, muscling through pain and making history.

Jorgesen was a less experienced climber when they met, but a king of “bouldering,” flying up and over smaller faces.

They took years to plan their route, sketched out in graphics in the film, each stage called a “pitch” where they could stop and rest for the next pitch — places with colorful names, the Muir Wall, The Mushroom, The Dyno, The Traverse, Wino Tower.

But Caldwell’s life had plenty of drama before then, meeting a woman who shared his passion for climbing, joining her and others for a once-in-a-lifetime climb in the Kara Su Valley in Kyrgyzstan.

They were kidnapped by Islamic rebels, caught up a firefight with government troops, forced to take matters in their own hands to survive. Other pieces of Caldwell lore are woven into the narrative. 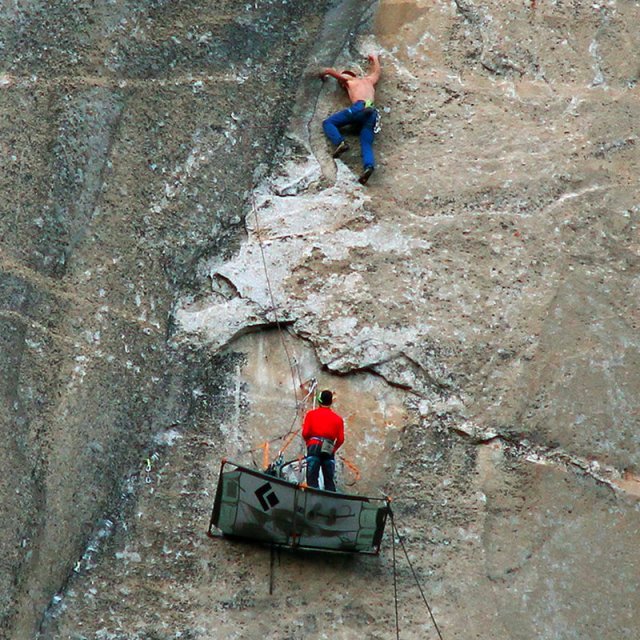 Climbing legend John Long is among those interviewed in “The Dawn Wall,” and his commentary becomes the narration of the film’s main body, the big climb itself. He expresses skepticism, amazement and sober analysis of the effort, the frustrations and every difficulty the two encounter (with roped off camera operators capturing the effort as they do).

Caldwell resolves that “We’re not coming down until we’re done,” and as we see the bloodied, chalked fingers hammered and nail-busted toes, the dozens of tries it takes to accomplish some moves, we know caught up in a wait….wait for it…cliff hanger.

Filmmakers Lowell and Mortimer were there to document every excruciating inch, with stunning Yosemite scenery as their backdrop for almost every striking frame. the film they got out of it is, like the experience they were documenting, one of a kind.