Posted on October 2, 2018 by rogerinorlando 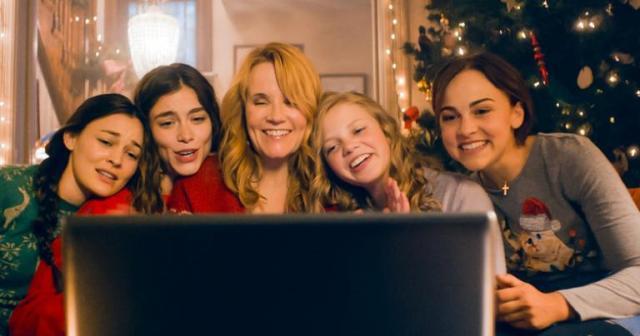 You don’t have to rack your brain or squint at the screen to summon up Louisa May Alcott’s “Little Women” in the first-time feature filmmaker Claire Niederpruem’s modern day adaptation.

The bones are there, the four March sisters, making their way through life toward “happiness” in four distinct ways, coping with tragedy and the odd broken heart as they do.

It may be a colorless affair and being faith-based, adventurous liberties are not taken with the story or the characters. No sister comes out as gay, no loves-to-overdress-and dance neighbor boy named Laurie does either.

But it’s a serviceable “Little Women,” properly modern in the goals the March girls set for themselves, retro in ways that pay homage to the source material.

Sarah Davenport of “Body Snatch” and “The Hatred” is the Alannis Morisette look-alike/think-alike Jo, an outspoken believer in making her way without any man in her life, without marriage and children. From childhood, she has been determined to become a famous novelist and playwright, setting her sights foolishly high, composing and re-writing her “Wrinkle in Time/Lord of the Rings” fantasy in longhand, where you can let the words “seep into your skin.”

Meg (Melanie Stone of the “Mythica” movies, which virtually no one saw) is focused on family, marriage, and is willing to stray from the home-schooled path to “fit in” with her peers — drinking, dressing provocatively and making out with hormonal boys, until she realizes that’s not who she is.

Beth (Allie Jennings) is the would-be musician, too shy to do much outside of the family.

Amy (Elise Jones) is the youngest, the one who wants to hang out with the other girls’ dates, mainly Jo’s outings with her Platonic pal, rich neighbor Laurie (Lucas Grabeel), an effeminate swain who cuts a mean rug and wears a bedazzled bowtie or beret with the best of them.

Laurie has a “manny,” a boy nanny (Stuart Edge) whom Meg crushes on.

Marmee (Lea Thompson) is their indulgent but financially struggling (briefly touched on) mother, while Papa March (Bart Johnson) is off serving his country as an Army surgeon in the Middle East.

One clever idea from Niederpruem, who co-wrote the script, is having Jo’s struggles to get her sword-and-sorcery fantasy ready for publication (hanging with a hunky professor/adviser played by Brit Ian Bohen) interrupted by flashbacks about the March girls’ childhood.

THIS is the story that will become the book that makes her, as it made Alcott, famous — a herd of sisters growing up, making their own entertainment, staging plays, acting and video-taping their shows, getting along via addressing “grievances” as a group, each pursuing her own path.

Any girl who gripes “Can’t we just be a normal family?” isn’t recognizing the mental development such video-screen-free play encourages. Any home schooler who brings her kids to this expecting affirmation will enjoy that, and grimace at how poorly-socialized the girls turn out to be in their teens. Home schooling giveth, and maketh naive.

Meg finds herself being fed drinks by a boy, Jo never learns to listen to criticism or accept her shortcomings as anything other than problems of “the patriarchy,” Beth lives the life unlived and Amy is headed for boy trouble if  she isn’t careful.

Davenport is the stand-out in the cast, though Thompson makes a engaging Earth Mother and Grabeel’s Laurie, always “Almonzo” bland (to use a “Little House” analogy) character in the books an earlier films, almost has an edge.

Not that they were ever going to let give the role any bite, not in this crucifixes and odd moment of heavenly hope story.

“Little Women” nowadays is a bit of a stiff, as a few recent more period-correct adaptations have demonstrated. This light and frothy updating goes down easily and as often as not, and achieves “That’s not bad” and “That’s OK” at times.

Not a ringing endorsement, but as faith-based dramas go, this isn’t angry and isn’t an over-reach. Its virtues are the same as ever, even if its dramatic shortcomings only grow with time.

MPAA Rating: PG-13 for some thematic elements and teen drinking